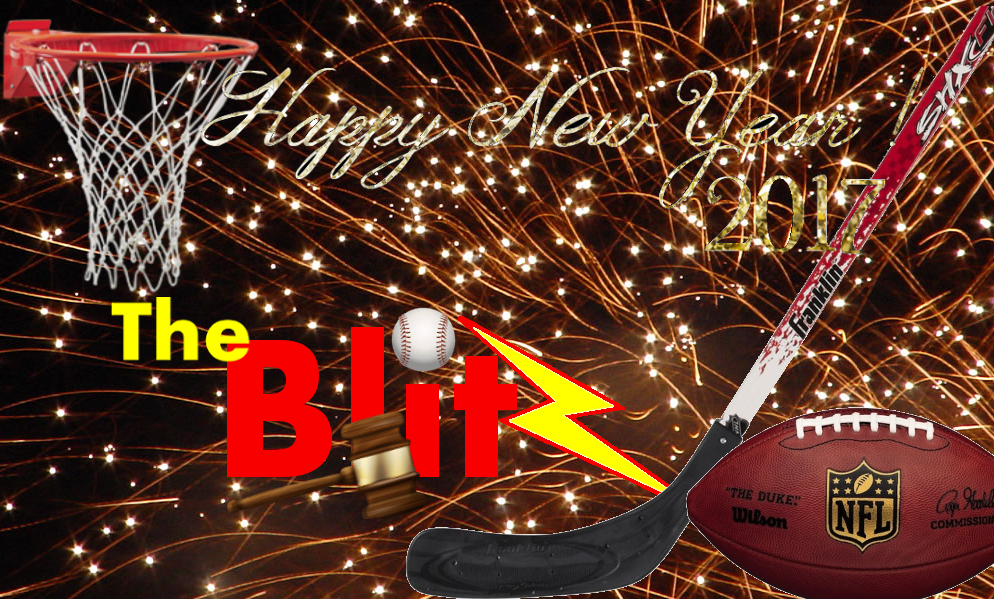 Wow! Ir’s hard to believe Advocacy for Fairness in Sports is only starting its 3rd month, and already we’re off and running into a New Year! I’m truly humbled by and so very appreciative of the friendship and support many of you have shown since the “Deflategate days,” and moving onward. I’m at a loss for words to express my gratitude!

As I think about things I’d like to see in the coming year, near the top of my wish list is to add some additional writers to the “staff.” I’m especially hopeful to hear from law students, as I think it would be an opportunity of mutual benefit; writing about important issues in sports law would give added exposure to new writers/future attorneys while at the same time, allowing for broader coverage of a greater variety of sports fairness issues for the blog. Together I believe we can make a impact for the better! If you’re interested in writing, or know someone who might be, you can learn more here, or if you have a news tip, story idea, or other comments, click here; I’d like to hear from you. Also, to everyone reading who’s is interested in sports fairness issues, I’d like to invite you to join our little Facebook group.  To friends old and new, I wish you a happy, healthy and prosperous New Year! The challenges may be great but the possibilities are also endless. Let’s make a difference together! #OnTo2017

This is an impressive summary of the Sooner’s handling of the Joe Mixon case by Rexford Sheild.

Lindsay is one of the many incredible people I’ve been blessed to interact with over the past year. She delivers an excellent take in this article (as always)

I’ll end this thread with my year-end review, “The year in ‘locker room talk'” https://t.co/r3rMVsdLEK

She was also instrumental in inspiring me to take on the topics of sexual assault and domestic violence.  You can read my first article here, and her piece that inspired me here.

This is an important and disturbing development. We need to make sure our congressional representatives are aware of the facts and that we object to moving backward.

Congressman wants to scrap campus rape rule he says is unfair to the “often-innocent accused” https://t.co/lerapg1iAp via @HuffPostWomen

This isn’t a sports article, but is a very important, and under-reported issue in regard to domestic violence.  I hope you’ll find time to give it a read.

Last yr, I wrote about how #DV survivors, incl. Valerie Seeley, deserve clemency. She got clemency on Frihttps://t.co/KvICw6r4sR #cjreform

In case you missed it over the holiday weekend, I wrote an article about the NFL insurers lawsuit against the league and how it’s now proceeding to discovery.  In my opinion this will be one of the more important sports law cases of the coming year.

NFL Ordered by Appeals Court to Proceed with Discovery
Important case to keep an eye on in the coming year. https://t.co/mm9LnODcvz

Three of my favorite sports law attorneys, Daniel Wallach, Dan Werly, with top concussion litigation expert Paul D. Anderson, discussing perhaps the most important and vital issue in sports. You really owe it to yourself to listen to this podcast. If you’d like to access it on itunes and subscribe, here’s the link.

With the NFL concussion class action settled, the 50 opt-out lawsuits will go forward in 2017. Some familiar names: pic.twitter.com/AltKqLtx2H

The Texans can’t get their story straight on Tom Savage’s concussion https://t.co/kmafpFyDoo

Rick Westhead’s been nailing coverage of the NHL concussion suit and what’s being revealed in discovery there. Here’s the latest:

New court filing has details re 27 documents NHL fighting to keep secret in concussion case, including emails related to a player death /1 pic.twitter.com/eQDR8TmOKs

The NHL is trying to have it both ways with fighting, and it’s endangering the players, via @PeteBlackburn https://t.co/9dl4bLYvKX

Truth is indeed stranger than fiction. As Jaime said, “2017 has begun.”

Seems like an overreaction to fire Kelly…Classic mistake of instant gratification vs. giving a coach time to establish his game plan. https://t.co/TEjEGx4DKe

Things are rarely black and white, and often there are no clear-cut answers.  Such is the case of Michael Floyd.  Fact: his DUI arrest revealed a high level of intoxication.   While not a violent crime, driving while intoxicated is dangerous not only to the driver, but threatening and potentially deadly to others who share the road.  What we don’t know, and probably never will,  is if this is habitual or an isolated instance?  Floyd has shown himself to be a capable football player, but this doesn’t excuse placing others in danger.  As the criminal justice process unfolds and league discipline is decided, I think it’s best to keep an open mind.  He’s probably wound up in the best situation possible – the Patriots are known for having a disciplined system; Belichick’s reformed more than one loose cannon, so I’m hoping this turns out to be a good fit.  As always Michael Hurley has delivered some well reasoned thoughts on the subject.

I didn’t know Clemson had an undergraduate urology program. https://t.co/GNBGo5NUVQ

How Trump could exact revenge against the NFL https://t.co/D1pwgCC1nw via @nypost

Lindsay wrote this prior to last year’s Super Bowl. If you missed it then, it’s well worth reading now.

In Jan. I talked w/ Marlin Briscoe, the 1st black QB to start in NFL, & wrote on how racism still impacts the game. https://t.co/W4gaxM5qlT

There is so much that we, individually & collectively, can do to make 2017 a great year! And let’s try to focus in the greatness in sports! https://t.co/rKHJuvG1tq

I’m thankful for the valuable insights Dr. Abrams has contributed to Advocacy for Fairness in sports.  You can read an in-depth interview with him here.  He also, along with Daniel Wallach added some important thoughts about handling domestic violence in the NFL in this one.

Permanent link to this article: https://advocacyforfairnessinsports.org/2017/01/02/the-blitz-1217/