Who’s going to foot the bill for #NFL #concussion settlement?
Here I detail the NFL’s controversy w/ its insurershttps://t.co/fxzmA4jPpt

My latest details how #Eagles Lane Johnson moves his case against #NFL & NFLPA forward by ignoring a court order. https://t.co/dBdSdYtKUm

De Marcus Cousins will be wearing a “suit” for his arrival with the Pelicans https://t.co/miqHsZgTAD

In other Demarcus Cousins news, he’s been served in a civil lawsuit v. DC & Matt Barnes for allegedly assaulting a couple in a NY night club pic.twitter.com/HF6Lgw3QW1

Cousins will not face crim charges, & (to my knowledge) no NBA player has ever been disciplined by the NBA based on the result of a civ case https://t.co/LgT1QAJBJU

In this Conduct Detrimental podcast, the Dans breakdown everything you need to know going into Revis’ preliminary hearing on Thursday.

Powerful food for thought. Must read!

Revis faces up to 65 years – even if he never threw a punch. Can we talk about the real story? Latest: https://t.co/nQ3m4dgwKF

Tony Dorsett as he battles dementia & fears #CTE: “No clue end was going to be like this” https://t.co/LDaMC5KPfE
h/t @CyndyFeasel

TV ratings data suggests the NFL could bolster its average ratings by closing a few of its broadcast windows https://t.co/E0IlrjmpIZ

Why DeMarcus Cousins could have lost $30 million last night https://t.co/Q9Xo3EbwE4

Women’s basketball now has its own version of #Deflategate
https://t.co/lgtEjX0fqB via @DougFeinberg 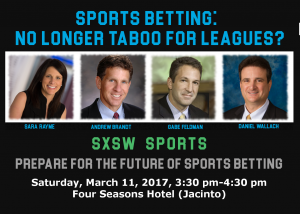 The future of sports betting – it’s in the game? https://t.co/BoPZyxkZUf via @gamblinginsider

Texas Gov. Greg Abbott: I was only joking about a bill forcing NFL players to stand for the national anthem https://t.co/yd8nRVTAEB pic.twitter.com/FrBquX9cJV