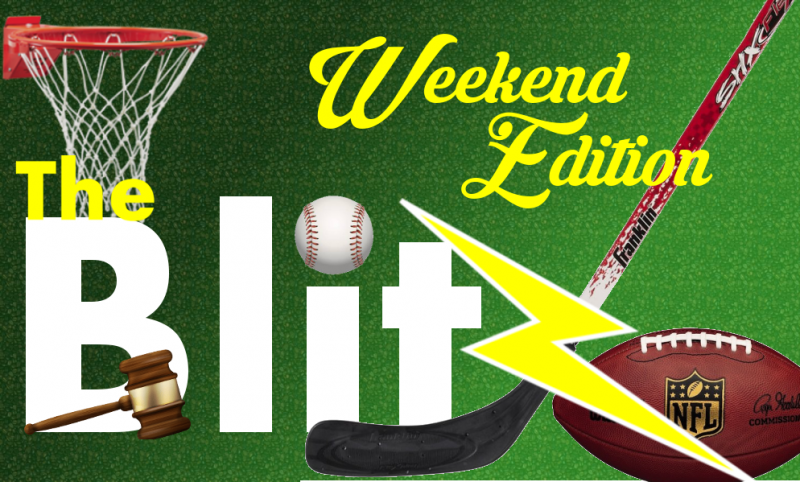 In view of the new filing, which was a letter from the insurers to the Court, I updated the article I wrote last week. Here’s the latest.

I updated last week’s article re #NFL insurers litigation to include a new filing. This will bring you up to speed.https://t.co/fxzmA4jPpt

New Concussion Lawsuit against the NCAA

After an incident on Feb. 2, a Pennsylvania HS banned the parent of a wrestler from campus. The parent has sued.https://t.co/omAlwygXx5

PDF of @BellatorMMA‘s federal lawsuit to block #UFC from gaining access to its financial records in antitrust case: https://t.co/6IKi8Jmhmb

#NBA Larry Sanders Was Arrested In June https://t.co/dXV92bJ0vM via @DukeOfNick

I thought if #CTE cases are excluded from the settlement there would be no #NFL #suicides. #NFLPA https://t.co/sTPjABF8dm

Agree, great urgency to answering these questions now that hundreds of cases have been identified in 7 new sports/exposures in last decade https://t.co/4DBv1rdWTx

On Thursday Dr. Bennet Omalu spoke at Boston College.  Here are some of the high points of his adddress:

And here’s an article I wrote last week detailing his letter about the NHL’s CTE denial.

Concussions are increasing for female athletes

#Trump‘s press secretary compared #marijuana to #opioids, but the #science doesn’t support that https://t.co/YtZnccmXae via @BI_Science

Jim Harbaugh jokes he deserves an award for time with #49ers Jed York https://t.co/zo9F4eRRP2 via @GiveMeSport

On the @PlayersTribune, @JJWatt opens up about his toughest year. https://t.co/cPkInCNK41

Mike Pereira: Putting a chip in the football wouldn’t help with spotting https://t.co/uk18jqQLNB via @MichaelDavSmith

Gronk warns Goodell that if he tries to go to a Patriots game, the fans in New England will physically prevent him https://t.co/mS3Mh9qITm

.@Orioles VP John Angelos says President Trump must apologize for his comments before throwing out a first pitch. https://t.co/myHeSsQgzZ

I have to wonder if this is happening to someone as well known as the son of “The Greatest,” what happens to people of lesser resources who are not well known.

Michael Phelps ‘would probably do’ another Olympics if not for injury risk, also to ‘speak out’ at Congress https://t.co/8gRmMBk776 pic.twitter.com/81uDY6L6gM

Permanent link to this article: https://advocacyforfairnessinsports.org/2017/02/25/the-blitz-weekend-edition-22517/