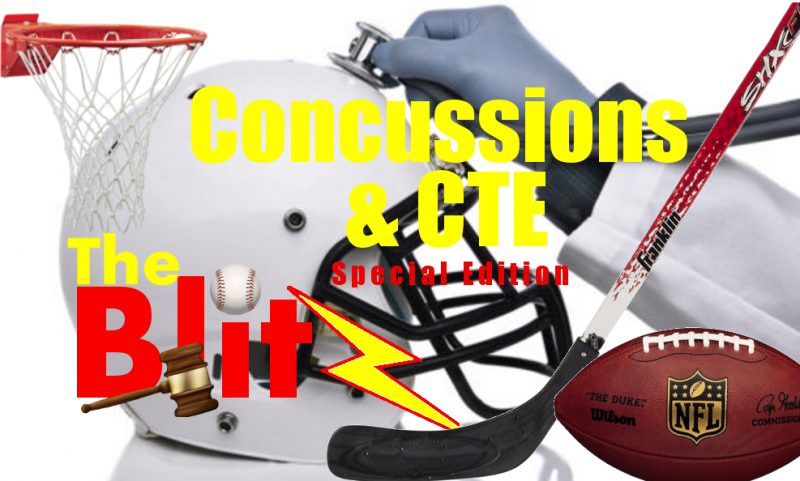 Today’s biggest headline grabber is the NHL’s most recent attempts to discredit the science of concussions and CTE, and because of this, I decided to put out a special edition of the Blitz to focus on this important issue.  The sports leagues need to realize that people are watching, and moreover, that they care, and in that vein, please consider re-tweeting items you feel are important or sharing articles on Facebook or other social media platforms in order to insure that coverage of this doesn’t slip through the cracks.  In this issue I’ve tried to round up some recent essential information.  Pass it on.
~Sheilla

While the NHL’s been trying to avoid damages in a class-action lawsuit for a while, hiring their own Exponent-style “expert” who seeks to discredit the work of researcher such as Dr. Bennet Omalu and Dr. Ann McKee, I found these tweets by TSN’s Rick Westhead shocking. – (Note – Westhead’s been on top of this lawsuit from the beginning and is a phenomenal source of info in that regard.)

Researchers in Toronto announced today they found CTE in the brain of man who suffered from ALS but did not have history of concussions. /1

The Canadian Concussion Centre at Toronto Western Hospital said the man was not a pro athlete. /2

This could have implications for NHL concussion lawsuit if NHL points to case to suggest maybe other reasons beyond concussions for CTE. /3

Exactly. That would be a good counterpoint. https://t.co/l3DdZaf1SP

NFLCSFacts located the study:
(And compared it to another study we’re all aware of)

First #CTE Patient assumed to have Had No Prior Brain Injury https://t.co/YTrRqMTQq4 …#TBI pic.twitter.com/D6virMhqL6

?Here’s some recent and relevant concussion discussion as it relates to the NFL:

Chris Brymer: From USC to #NFL – to homeless and in jail #concussion #CTE https://t.co/tJUobslpno via @abc7 h/t @RobertinSeattle

While attorneys deserve to be paid, it remains to be seen how much of this #concussion settlement will actually go to the players. https://t.co/Fl3cPu9HAf

And Now the Fun Begins…
The #Concussion Settlement is far from settled. https://t.co/DIyu6wgrgx via @RobertinSeattle

ICYMI
Discovery is ongoing in another #NFL insurers lawsuit re #concussion settlement https://t.co/mm9LnODcvz

Concussions are also a concern in other sports:

Though she’s never missed a race because of injury, Danica Patrick suspects she’s had a concussion #NASCAR https://t.co/MgXwQBsTji

Unlike the #NFL horseracing recognizes the #concussion problem by has little funding to address it. h/t @flysofree https://t.co/QEdjZJdrM5 pic.twitter.com/1bwKPlE591

Permanent link to this article: https://advocacyforfairnessinsports.org/2017/03/03/the-blitz-special-edition-3317-concussions-cte/