The government’s star witness in Aaron Hernandez’s murder trial took the stand and admitted to being a drug dealer https://t.co/1lm5Y6Qdg2 pic.twitter.com/GHChCrNygp

Possible jury issue in #AaronHernandez case, someone claiming to be “Juror 8” posted about case on Reddit: https://t.co/HOj9bI2gNJ

Fractured friendship of Aaron Hernandez and a gangster played out in bone-chilling court scene https://t.co/tcVuxlNwWd via @DanWetzel

Has the Super Bowl jersey thief avoided prosecution, and if so why? https://t.co/ZzqlgzGDji

AUDIO: UNH and SI’s Michael McCann with some insight on the Hernandez trial, Bart Hubbuch and Brady’s jersey https://t.co/2yZ0H7zVjI pic.twitter.com/xMgTBXQNHR

How the NHL vs. Dennis Wideman ruling relates to Deflategate

ICYMI – I broke down the Dennis Wideman ruling and how it relates to #Deflategate with insights from @WALLACHLEGAL https://t.co/aXKc5AA1Nh

Lane Kiffin sued for allegedly failing to hire someone for delivering a recruit https://t.co/nC9ZitRLAN pic.twitter.com/k0XZzoGdWi

Lane Kiffin and FAU sued by ex-Alabama wide receiver, who argues he was misled about a coaching job. My @SInow take: https://t.co/U6zpCEfVyn pic.twitter.com/42DyXcU0jS

A University Says It Shouldn’t Have To Pay Money To Campus Rape Victims https://t.co/Nt3VpGvfXd via @tylerkingkade

What would have been an interesting case on whether journalists’ use of social media is an extension of their employment ends quickly: https://t.co/ge11ObKZbF

A New York Post spokesperson sent over a note that Bart Hubbuch has withdrawn his suit against the publication.

Language of stipulation reveals parties’ agreement that dismissal would be “without costs to either party.” https://t.co/hpAieRXojs

Bart Hubbuch withdraws lawsuit against the New York Post; the two sides dispute whether he admitted it was frivolous https://t.co/RZbqDJzmSh

Awesome work by these ladies on #braininjuryawarenessday on the Hill! https://t.co/AfMQGQt91g

The real reason fans are mad that NBA players take rest days is not because of them actually sitting out, it’s because of how much they earn

$$ doesn’t buy health. Be smart about this…
Applaud strides for player health and demand it of other leagues which tend to push it aside https://t.co/ajuaiux9dy

Roger Goodell wrote a letter to NFL fans yesterday.  Courtesy would indicate a response, so I intend to reply in the near future. ? 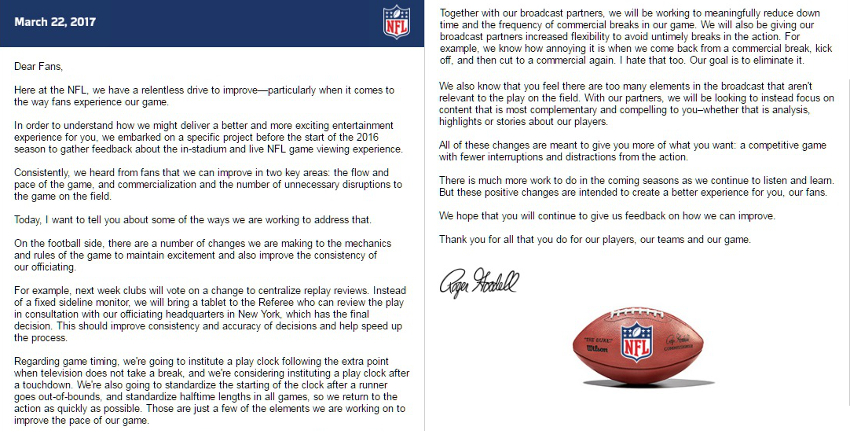 The NFL is preposterous. But at least they’re addressing what *really* matters: the appropriateness of celebrations. https://t.co/hzWWCVsxyn

EJ Manuel is the latest player to find out the hard way that there is no middle class for NFL quarterbacks https://t.co/G93bjiXk07

#NFL is charging #Raiders ~$275 million less to move to #Vegas than the #Rams and #Chargers each paid to move to #LA https://t.co/uUsyMBizxa

The NFL has reportedly set the @Raiders relocation fee at $325-$375 mil, a considerate discount from the hefty $650 mil the LA teams paid.

Fans think NFL players get great medical care. WRONG! Medical decisions are made regarding players which would never be considered for fans

If an accountant breaks their ankle, it’s cast/boot &/or surgery & 6-8 wks on crutches. NFL players get narcotics, Toradol shots & an IOU

Jim Harbaugh has a message for NFL owners: Colin Kaepernick can ‘win championships’ https://t.co/UINYLP2WSq via @CindyBoren

“The bigotry behind @Kaepernick7 unemployment” Spot on accessment by @linzsports
(includes tweets from NFLers)https://t.co/PqVLcR8cVu

Black male college athletes make up > 50% of NCAA revenue sports, make $$ for the school, yet graduation rate @ 50%. How do they benefit? https://t.co/DeVd5uo7j5

368 gymnasts allege #sexualabuse in their sport, while @USAGym worries about Olympic gold and sponsors. #sportslaw https://t.co/MwXybMrLTw

(TW) This is the most important podwe’ve ever done. Nancy Hogshead-Makar is a Title IX attorney. She breaks it down https://t.co/ETQ5Afzl7e

There have been times when organizations have harbored predators & they either knew or should have known. Need heavy accountability. https://t.co/RS1y0zCXts

Try not to act surprised: Brent Musburger says he once bet on a game he called. https://t.co/hKwt9r9bPu pic.twitter.com/KisZkx4SC7

So many Puerto Rican baseball fans are bleaching their hair that the island’s dye supply is running low https://t.co/9VWvwEPBQE pic.twitter.com/XdIbWuPWHv

Soccer player who shouted out his girlfriend and wife attempts to get out of the doghouse https://t.co/BM0NSJ4ieM pic.twitter.com/ZBHtOkSBfy