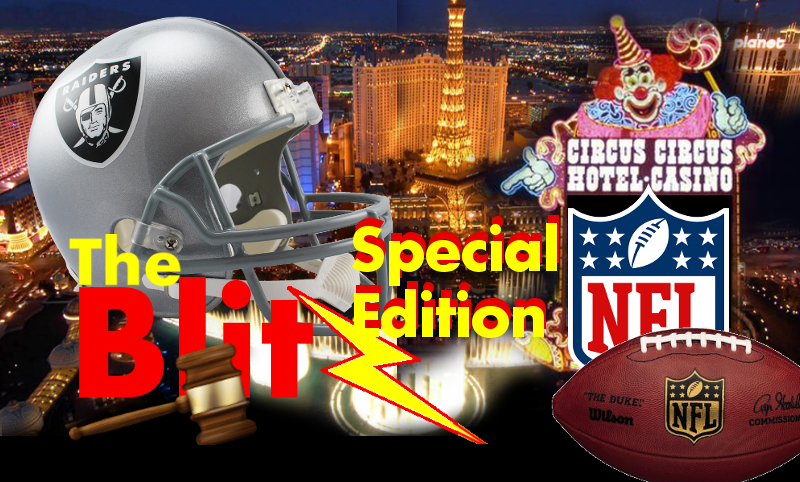 Yesterday the NFL  said “Adios Oakland” and “Viva Las Vegas,” leaving many long-time Oakland Raiders fans in turmoil.  This special edition of the Blitz is dedicated to them.  As such, I’ve tried to round up some of the best articles and tweets of the day, which capture the range of sentiments expressed as well as the blatancy of the NFL in its never-ending quest for the ever-higher profit margin and the level of hypocrisy it continues to expose.

Before moving through a timeline of the day’s events, I’ll start with what I feel was the best piece to come out on the story via Bleacher Report’s Mike Freeman:

The NFL, Vegas and greed. https://t.co/qlzpwYgJKE

The morning was tense as everyone awaited news from the owners meeting.  Derek Helling posted at Fansided in an objective attempt to make sense of the conflicting messages.

Raiders fans getting mixed messages@dhellingsports takes an objective look at the spin: https://t.co/BA56Xt8TLB

OAK mayor Schaaf had a letter hand delivered to owners at Biltmore pleading the city’s case.

Michael Abromowitz did some digging.

Media kept a watchful eye on the owners’ meeting.

Goodell said Raiders intend to play in Oakland next 2 seasons. No place currently in 2019

Davis suggests extending option to play in Oakland for 2019.

Wow. Mark Davis said fans who had already put down season ticket deposits for the #Raiders can get refunds. Class move.

Even though they’re a division rival, Miami just ⬆️in my book.
It takes moxy to stand against 31 powerful opponents. https://t.co/vlTDZGHHkt

There are times when words seem inadequate – but I felt I needed to say something.  I’m glad my words were taken in the right spirit.

I needed more than 140 characters. pic.twitter.com/hf878ysqyB

Sad day for Oakland! You think about all of the incredible historic moments @OAColiseum but no matter where they go I’m a @RAIDERS girl pic.twitter.com/weTpLqstFm

@TheKenStabler @KendraSMoyes @mikefreemanNFL See this yet? Can’t argue too much with it. We all have our faves. // https://t.co/GWybVJWEBK

The media is still here, along with some super fans… somber mood, but we are all together. #raiders pic.twitter.com/NSyE47X2Kr

In whatever the NFL might hope to gain (and may perhaps ultimately loose) by this move, their hypocrisy regarding gambling is in full display.  A sports league, who in conjunction with other leagues, continues to battle in court, the taxpaying voters of New Jersey in opposition to their right to legalize sports betting has now placed a team in the gambling and sports book capital of the United States; all the while maintaining the line that they continue to oppose sports gambling.  Their audacious ( and so far successful) circumvention of states’ rights and voters’ ability to decide their own laws is staggering.   Robert Kraft and Jerry Jones have invested in DraftKings.  The NFL has no problem in accepting DFS advertisements or the revenue for the same.  The bumbling and awkward manner in which Roger Goodell has addressed this would be laughable if not for the fact that people are being disregarded.  And that is never funny, even though the powerful impose their will regardless, typically in the quest for more power and ever higher profit.

If any good does come from this move, it will be that the NFL will not for much longer, be able credibly maintain its position on the evils and dangers of legal sports betting.  Here are some good analyses of the likelihood that placing an NFL franchise in Las Vegas might pave the way for other people in other states to enjoy the benefits of legalized and regulated sports gambling.  Here’s some good content in that regard.

Looking back at the NFL’s opposition to sports betting in its own words: https://t.co/YV7IPDMhyi pic.twitter.com/5QPCPrwizu

How Raiders’ move to Vegas could undermine the NFL’s opposition to sports betting, via @TBarrabi https://t.co/clA8OJVeyy

Raiders going to Vegas? Happy for all of those boys catching that tax break ???

The Raiders moving to Las Vegas means higher “net pay” for players. In a @SInow piece, @SportsTaxMan and I explain: https://t.co/AjZsBDUg1q pic.twitter.com/8fn4RemJWP

How can money be the top priority when Goodell already called dibs on player safety as #1? He wrote it down and everything https://t.co/QzC6kRxEzN

This fountain put up for the NFL owners party at the Biltmore pic.twitter.com/77zIOZSNBo

As a Patriots fan, if there’s one thing I learned during Deflategate, it’s that the NFL will manipulate anything it can to its advantage.  (Okay – two things . . . ) And that when people who typically support other teams come to bat for your team it means a lot.  I hope that all of the Patriots fans reading will support the Oakland fans (and San Diego fans and St. Louis fans) who’ve recently had their teams torn from their cities.  Tax payers should not be forced to finance the NFL’s ambitions, especially while that same NFL seeks to thwart the efforts of the tax-paying voters of New Jersey.  If we can all learn to root for our teams on the field and enjoy friendly rivalries, but when the chips are down, unite with and support each other against a tyrannical league – one that exploits its players past and present as well as fans, perhaps we can find a way to restore true integrity to professional football.

Permanent link to this article: https://advocacyforfairnessinsports.org/2017/03/28/blitz-raiders/