Baylor acknowledges that the an appeal would impact this case, plus the four other Title IX lawsuits filed against it (see footnote): pic.twitter.com/gbPnAPMMzc

This is a strange development. https://t.co/7pOZJepwUd

Michael Irvin incident report (which is heavily-redacted) indicates sexual battery thru use of threats/intimidation: pic.twitter.com/UhjpT1ab8y

Bears’ Deiondre’ Hall tasered after allegedly spitting at officer during arrest via @jordanheckffhttps://t.co/stibRjrDHQ

.@brentboyd62 talks about his NFL career, #concussions and football safety. https://t.co/MTtWjBv4Xv via @Newsday

How a protein called ‘NFL’ could help the NFL with brain injuries https://t.co/j3Ut5qbkQV via @DesBieler

I’ve been concurrently (and independently) working to verify some of these allegations and a disturbing picture emerges. to confirm. https://t.co/sTPfXsLaXJ

“It’s sad b/c they based their entire ‘class’ on getting other attorneys to give them referrals & now leaving those attorneys out to dry.”

From what I can tell, many former players and their families will be left “out to dry” as well.

The payments to #NFLsettlement lawyer should be held by the court until the players receive full payments & be pro-rated over 65 yrs. #NFLPA

Interesting to note that in yesterday’s webinar Q & A Seeger refused to address this or allegations re: Anapolhttps://t.co/eKw4l5SqA9 https://t.co/vwvbZaVOhb

Discussion was mostly circular presenting little if any new information.

Potentially misleading statements made to players regarding how BAP could help to secure NFL disability award.

It won’t. While BAP is being presented as a benefit, it has the potential to backfire and be used against the players. Note: Those who opt out of BAP will receive a 10% deduction from their award.  Curious.

A former team doctor on the Toradol lawsuit, another health crisis the NFL will pay for after a slow response.https://t.co/Bthh2UPUQu pic.twitter.com/pg1Zvnnksl

Why is Roger Goodell on such good footing with ownership despite so many scandals? Money, money and, oh yeah, cash. https://t.co/08n28AxkwM

These two tidbits from @mikefreemanNFL are why I typically side in favor of players vs management 99% of the time. https://t.co/D7W03Y0uXX pic.twitter.com/57SB7nVsCF

Goodell requiring this to be a story is such a magnificent mark against the job he’s doing. https://t.co/mkRhMTVwTY

Agree with Florio on all but the last phrase. https://t.co/TRL9BwctVe via @ProFootballTalk

I’m sure this will be officiated properly and effectively, without incident, by NFL officials. https://t.co/oonPvRanIe

Now the NFL has Vegas, so where does the next dollar come from? @AlbertBreer on London calling as the next frontier:https://t.co/YALKL6ERTY

Roger Goodell still doesn’t like gambling, but can live with Las Vegas ? https://t.co/cNqVbu07wH via @daringantt 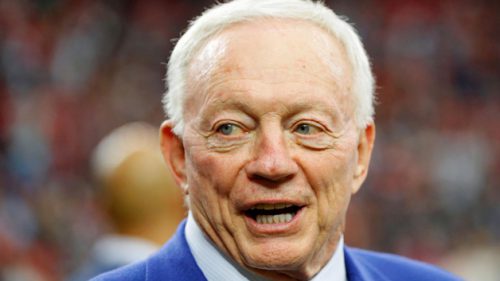 HOUSTON, TX – FEBRUARY 05: Dallas Cowboys owner and new Hall of Fame inductee Jerry Jones looks on prior to Super Bowl 51 between the Atlanta Falcons and the New England Patriots at NRG Stadium on February 5, 2017 in Houston, Texas. (Photo by Kevin C. Cox/Getty Images)

Michael Hurley makes a good case for Jones as the driving force behind the Raiders’ relocation.

According to league source fewer than a dozen #Raiders season-ticket holders returned them for refund as Mark Davis offered as of late Mon.

In light of $53B P5 schools have earned over 12-yr. period, here is NCAA Pres. Emmert testimony in O’Bannon trial: no money to pay athletes. pic.twitter.com/dqKawOozD7

Olympics has moved past antiquated #amateurism definitions. NCAA needs to do the same. Positive case law needs to be established. https://t.co/DweohhapcO

Unfairness of the NCAA transfer rule.

Kevin Trahan delivers an outstanding piece of journalism as he tells the story of Johnnie Vassar.  I’ve included both the long and short versions; recommend the long one.

If you missed my Vassar/Northwestern piece or don’t want to read 7,000 words, here it is, with the main issues https://t.co/ErBNwVxVrP pic.twitter.com/uRu0uKzA3Z

The #solidarity described here is why the women prevailed.
Bravo #BeBoldForChange ? https://t.co/Wfmihri074

Sports labor struggles matter: they project labor into MSM, they improve lives of players & THEY GROW THEIR SPORTS https://t.co/Et6ZfVhwSX

Regardless of where you stand (or kneel) I hope you’ll take a few minutes to read this one!

Objective look from @DanGrazianoESPN:
The Colin Kaepernick debate is broken — both sides are wrong https://t.co/vHCrpYWfL2

Hard to reconcile wanting athletes to be more than football cliche’ machines and criticizing @Kaepernick7 for speaking out on bigger issues.

Hard to reconcile wanting athletes to be more than football cliche’ machines and criticizing @Kaepernick7 for speaking out on bigger issues.

.@bomani_jones on @Kaepernick7 and the problem with the “distraction truthers.”https://t.co/ETVLZ8tj1D

The report that Kaepernick wants $9-10 million per year may be #fakenews https://t.co/2daDU0tnqm

I spoke with @BobSaietta about the need to focus on the NFL’s actions rather than on its words. Far more revealing. https://t.co/LNL8G6x9LZ

.@WALLACHLEGAL on the NFL & sports betting in light of Raiders’ move via @Covers_Vegas https://t.co/woTD2qEUkQ pic.twitter.com/QCZlupWwzi

As they fight legalized gambling in court.. https://t.co/M3GyfP07cy

AFC owner on gambling- “That’s a joke to even say that’d be a problem. That was an issue decades ago.” https://t.co/qOZcSpBbYU

More comments from NFL owners regarding sports betting in this @AlbertBreer piece: https://t.co/bksVfV4Mum

Hope you’ll join @sadie_gaming & me next week for a discussion on the future of sports betting in the U.S. https://t.co/n0ahEAzkCC