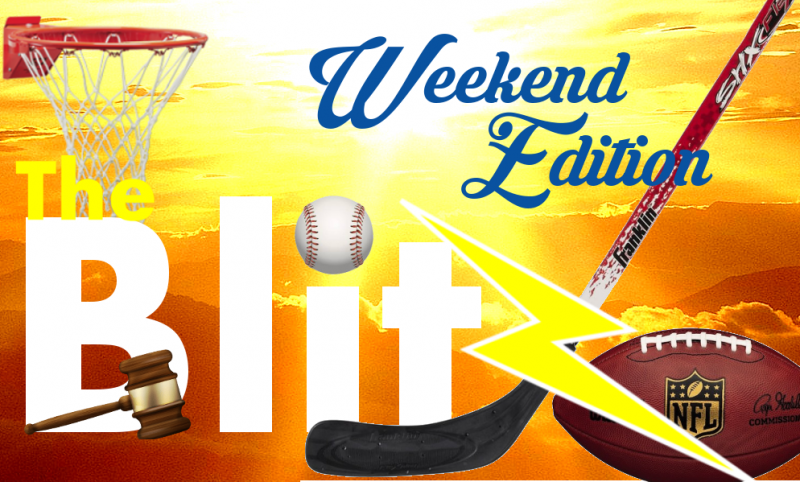 3 active & 100+ former NFL players pledged brains to science. No active & 5 retired NHLers have done so.
“We are focusing on hockey now.” https://t.co/GgLJAjN6qu

I had a few Twitter followers tweet this story to me.  I tweeted and put it on The Blitz the day it was published but it’s such an important story I decided to run it again.  I think every NFL fan should see this…so ICYMI

@SheillaDingus did you see this story on Rickey Dixon?https://t.co/JExz9z99oD

.#NFLPA let players exposed to bogus test and encourages its use in schools. https://t.co/h9jhW0kCks via @WSJ @ericwinston

Link to @RickMaese‘s March 2017 article about the lawsuit. If you haven’t read it, you need to.https://t.co/OIPaxcJbtL pic.twitter.com/lp11Qqd0v9

The sad reality of the NFL. Bought and paid for doctors continue to overprescribe medication and to numb areas of pain rather than heal them https://t.co/J3YRlUhFag

More from @RickMaese article
“The law is the law”
(Unless you happen to work for the #NFL I suppose)https://t.co/P3YhEI21yJ pic.twitter.com/2Wubn39DZW

NFLPA’s new pot proposal hasn’t been submitted to NFL yet, does not necessarily include remova… https://t.co/9uVSfhCu2n via @NickiJhabvala

Happy 420 — except for NFL players, because for them 4/20 is the day when annual drug testing begins https://t.co/wfNky7Ww63

Reefer Madness: Leagues And Players Have To Adjust To Pot Decriminalizing https://t.co/gWMhUXirrX via @sportstalkfla

There were so many articles on the tragic life and death of Aaron Hernandez – from thoughtful opinion pieces and comments – to straight news – to insightful legal analyses – that I decide to compile what I felt were the best of the bunch .  You can find it all right here.

A woman injured by an errant bat at a Baltimore Orioles game last year has sued the team, seeks additional netting https://t.co/PPytS0s5Oz

Key challenge for Eli Manning will be how he refutes emails he allegedly sent. Will he say the emails are fake? Or that he didn’t send them? https://t.co/exkodQIhrv

Joe Mixon settles lawsuit with woman he punched in 2014 https://t.co/kI9JsoRh1j via @harrylylesjr

The statement from Joe Mixon & his victim Amelia Molitor on her lawsuit. Actually has her saying, “We both could’ve handled it differently.” pic.twitter.com/3URPoCOtOt

Cardell Hayes sentencing for the murder of Will Smith

It’d be surprising if Cardell Hayes is tried for pending aggravated assault charge in Will Smith case, pundits say | https://t.co/QFUBwl315n

Will Myles Garrett’s decision to sit out the draft put the NFL & NFLPA at odds?

#sportsbiz Don’t look for Myles Garrett at the NFL draft. He’s working on a new game https://t.co/2yD4qoKijd via @Foxworth24

These are not supposed to be leaked…But it’s the NFL ??. https://t.co/VGXFByXrl6

Leaked Wonderlic test scores will eventually lead to an “invasion of privacy” lawsuit vs. the NFL. One way to end this unethical practice.

As It Embraces Las Vegas, N.F.L. Is Awash in Gambling Contradictions https://t.co/xm0HO2jpUp via @el_belson w/ insights from @WALLACHLEGAL

??Touchdown for Tom on this one!#NFL #chargers #raiders #Rams fans (or former fans) you’ll want to read this. https://t.co/snl6wmkbcX

Relocation or not, the NFL can count on increasing profits, directly or not, from gambling, Fantasy plays. https://t.co/pTN5xs6lXj

Good take from @SDUTKrasovic on #NFL relocation through the lens of #DFS / #sportsbetting #FollowTheMoney pic.twitter.com/Wl6vwIZalj

We do live in interesting times…
“Official Brothel of the NFL”?
Have fun @nflcommish #integrity https://t.co/K4jselbMu0 via @YahooFinance pic.twitter.com/9DSaka6nAB

Online posting for @DeanBlandino's NFL job shows how big it is, and that maybe it should be split in two https://t.co/MNf034D9Qs

But this seems to be a positive change.

MLB wants girls to know they can play baseball too https://t.co/3WMd1f82eI pic.twitter.com/28YdLRD8VO

Insights from @NiggaTheory in this analysis of Patriots players who skipped the White House visit. via @JReidESPN https://t.co/qWxxF9rjlY

Individual racism vs. institutional racism and why @Kaepernick7 strikes a nerve in the #NFL https://t.co/jobFvMLSgZ via @pastemagazine

I most often report on the controversies affecting the world of sports but always enjoy seeing the good athletes do which by far outweighs the bad.  As an animal lover and former rescuer, I thought this was especially cool.

Quarterbacks aren’t the only ones that look to @Lanejohnson65 for protection. (No wonder given that he’s a cat AND dog Dad.) @B2Bradtke pic.twitter.com/Kw8s2CLtm2

Another endeavor worthy of applause! ???

Permanent link to this article: https://advocacyforfairnessinsports.org/2017/04/22/the-blitz-weekend-edition-42217/