Good Lord! Look how many liens were filed in the Concussion Settlement w/in the past HOUR! (And my screen wouldn’t hold all of them!) pic.twitter.com/fW19lm9UxD

NHL Can’t Get Most Brain Research Docs From CTE Center https://t.co/LktC5zVZ8N via @Law360

Ticket-holders to last year’s canceled Hall of Fame Game have dropped their claims against NFL, though they reserved the right to refile.

The suit will now focus on conduct by the operator of the Pro Football Hall of Fame. https://t.co/FJGBbFclIH

The OHL says it faces liability of $30M if it must pay back pay and OT to players. League has 20 days to file appeal of certification.

Ontario judge rejects OHL argument this case will “bring on the eve of destruction for hockey players.” https://t.co/ZqJzmAWAJH

Insurer Wants Out Of Coverage In Rutgers Sex Assault Case https://t.co/Stc27yyFHQ via @Law360

Instead of accommodating hearing impaired with big screen captioning Kroenke feels captioning in suites or on rentable ipads is sufficient https://t.co/tyK10WbdDq

Isn’t this evidence of further discrimination? Those willing to pay more can “hear” what’s going on. https://t.co/10UeRAJJ40

13 Louisiana-Lafayette football players arrested after allegedly stealing $2400-worth of items from dorm room.https://t.co/HZqSTvOgef

I did a special Draft Day edition yesterday, compiling some of the backstories and legal issues surrounding the draft. 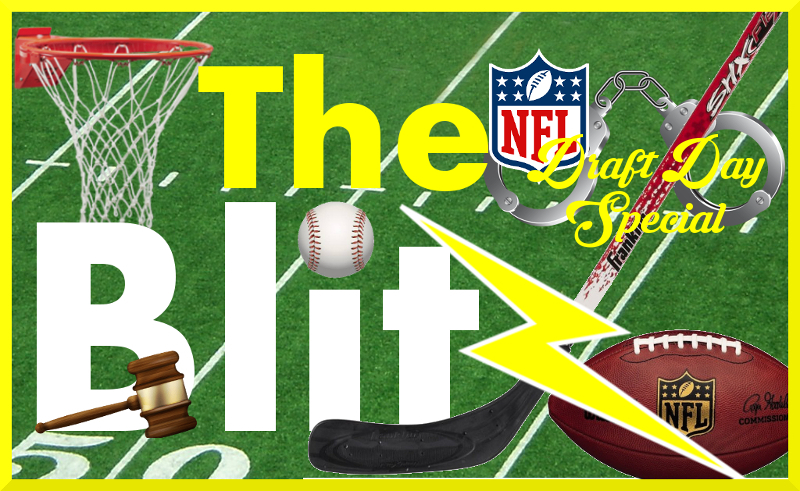 More 7th round picks/undrafted players have 10 yr plus careers than 1st rounders https://t.co/q7Tf6wHWw6

More undrafted free agents r in the Hall of Fame than overall number one picks https://t.co/GgA5ha1v93

10 years after not showing up for the draft, @joethomas73 calls the draft what it is — a TV show with unpaid actors https://t.co/72liQYlcET

Anthony Gonzalez thinks firing Roger Goodell would solve many of the NFL’s problems.

Finally. . . Something sensible from the NFL?

Why does this man insist on digging his grave with his mouth?

Roger Goodell says on Mike & Mike that marijuana is addictive and unhealthy. He’s not on board with letting NFL players use recreationally.

Goodell on @MikeAndMike: “we will remain opposed” to sports gambling.

Racial divides in the NFL

@NFLObjectors @TSNHockey @rwesthead Maybe that’s why it says: “A cause-and-effect relationship has not yet been demonstrated between CTE and SRCs …” https://t.co/teOjbNVcPN

@ConcernedMom9 @TSNHockey @rwesthead He was the genius hired to critique McKee’s work. It would make sense. He is part of a circle that publisher nonsense with NHL and NFL $.

NFL/AFL McCrory would know. The Aussies don’t do autopsies on athletes for #TBI. Problem solved – no one ever finds #CTE. @Science_Academy https://t.co/8pqKAk8jNQ

Brain injuries are a leading cause of homelessness throughout the world: https://t.co/2uqC9N9QyO

Those are sports leagues’ experts. Think in the style of Exponent. https://t.co/E5zzWPFrSl

ESSENTIAL read on the future of kids & heading in soccer: “What Happens When Soccer Bans Heading?” by @noahedavis https://t.co/4lERYG14gZ

He took a slapshot to the face, had 50 stitches and plastic surgery. Team doctors cleared him to play the same day. https://t.co/t1y8Fvp9Q1

?The Scoop on Sports Betting

Worth taking another look at @WALLACHLEGAL‘s series on the NFL and harm, after latest news. https://t.co/DhUmf77qOn https://t.co/lZacj3KEEU