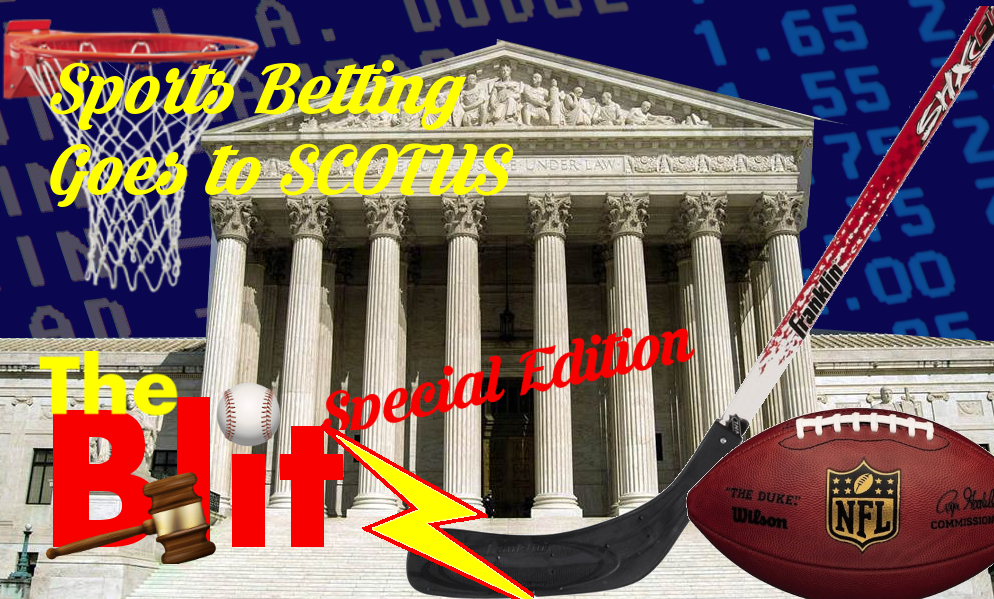 What a wild ride!  After two separate defeats in district and appellate courts, an unfavorable en banc hearing, and a request for the views of the Solicitor General – which recommended the High Court deny review, the Supreme Court announced yesterday that they will indeed hear the New Jersey sports betting case!

This special edition of The Blitz features the best news stories, highlights and a bit of background for those who need to get up to speed.

If you’re not familiar with the NJ sports betting case and the states’ rights issues involved here’s a great place to start:

Will the U.S. Supreme Court make sports betting legal in America? The odds may be good. My @SInow legal take: https://t.co/RyksofqvjG pic.twitter.com/Yzh9sSiJYG

#SCOTUS will review New Jersey’s sports betting fight. Take a look at how we got here w/ this interactive timeline:https://t.co/b8oDkq5vrT pic.twitter.com/ehJM3IClvh

Those watching the case expected a decision from the Supreme Court on Monday as to whether the justices would agree to hear the case.  Most experts agreed that the chances were nil, in that the Supreme Court accepts less than two percent of cases which petition certiorari, and when CVSG is requested they normally follow the recommendation of the Solicitor General.  Daniel Wallach took a deep dive into the issues surrounding the case and last Friday published seven reasons why he felt the sports betting case stood a decent chance of a cert grant.

Seven Reasons Why The New Jersey Sports Betting Case May Get Its Day In The Supreme Court:

On Monday at 9:30 AM, the Supreme Court’s orders were posted on the SCOTUSblog, but no mention was made of the New Jersey case.  In short order, Wallach began analyzing the situation and concluded that it would most likely be included in the Supreme Court’s “clean-up orders list” to be published on Tuesday.  Further analysis led him to believe that the case stood an even greater chance of receiving a hearing based on his research.

If the “clean-up” order lists from previous #SCOTUS terms is any indication, NJ sports betting has roughly a 50% chance of a cert grant.

Here is the good news for NJ sports betting: pic.twitter.com/UijiVywylt

And the news stories began to break.

US Supreme Court agrees to hear NJ sports betting case, via @johnsb01 (with comments from @SenatorLesniak and me): https://t.co/Zl4lf9kYQ9

yesterday I explained how the NJ sports betting saga already was full of surprises. now, SCOTUS takes it https://t.co/266AEePdvg pic.twitter.com/zYvvPufYsx

“It is not the role of the government to defend sports leagues’ reputations.”
Nice work from @michelleminton https://t.co/KeJ0Azfb8i

New Jersey’s Appeal of Sports Betting Ban Heads to Supreme Court, via @joedrape (with comments from me): https://t.co/1eelMsvmFW

Since PASPA, the 1992 legislation which banned legal sports betting in all but four grandfathered states (and for all practical purposes – all states but Nevada) has been driven by the sports leagues, who over the last few years have seemed uneven – and often hypocritical in their gambling stance – a number of stories focused on how the leagues will likely react to the cert grant.

Leagues have no business dictating states’ policy & law, much less overriding the will of voters. We live in interesting times. #Checkmate? https://t.co/fxwJivEg8f

Everything is now in play before #SCOTUS, including the selective enforcement of #PASPA by the sports leagues. https://t.co/WhPQEAXHk0

#SCOTUS action could spur movement from Congress, sports leagues on gambling, via @byajperez (with quotes from me): https://t.co/QMHj44z6Z8

The sports leagues have up until now claimed that they would be “irreparably harmed” by legal sports betting, but in light of their recent actions, will the argument hold? Daniel Wallach says it’s unlikely and explains why in this three-parter from April:

Hopefully Sports Betting USA conf in NYC in Nov will be seen by leagues as the place to build that aftermath plan https://t.co/sqCohIg7zc https://t.co/LRr7vcvjco

Good stats for NJ sports betting:#SCOTUS reversal rate of lower federal circuit court decisions is over 70% for the last 4 Terms.

The most compelling fact to me in all this: #SCOTUS departed from the recommendation of the Solicitor General. Doesn’t happen very often.

Permanent link to this article: https://advocacyforfairnessinsports.org/2017/06/28/the-blitz-special-edition-62817-sports-betting-goes-to-scotus/