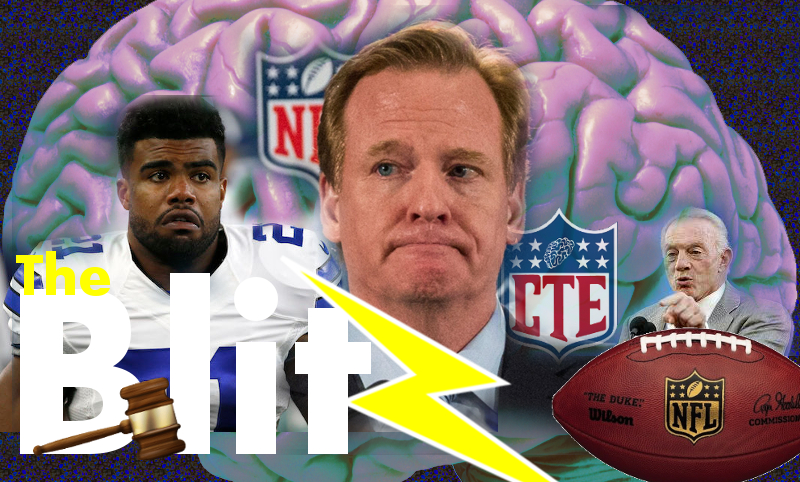 Either stand up for something or be prepared to lie down for everything https://t.co/Gzjq1JgJXg

.@AndrewBrandt has written a number of outstanding columns for SI. This is one of his best.https://t.co/ZCrzUxhQld

#Deflategate lives! See how as I examine #Cowboys #EzekielElliott‘s legal options with the help of @WALLACHLEGAL https://t.co/GfHJL8LABM

Will Zeke Elliott sue the NFL? Will Jerry Jones sue Roger Goodell? My @theMMQB and @SInow legal take on what’s next: https://t.co/jGn7czL7Kd pic.twitter.com/G1rQwXBWGC

.@WALLACHLEGAL and I did a whole podcast on Elliot’s appeal options, timing, and odds, listen here: https://t.co/Rd2IKbuJFU@ConductPod https://t.co/GXSRURARea

I wrote this last year about how the Deflategate court ruling negatively impacts NFL players such as Ezekiel Elliott https://t.co/wpZay9lIXQ pic.twitter.com/2AcfpazsY2

The importance of considering Ezekiel Elliott’s side of the story https://t.co/EA6fX7IzVL via @ProFootballTalk

A bit of background on Lisa Friel, who led #EzekielElliott investigation #NFL https://t.co/iIJLQUXeXd

I did a little investigating as to how payouts are going in the #NFL #concussion settlement. Here’s what I foundhttps://t.co/pnnPnJscSn

NFL Concussion Settlement News:
Orders are coming through allowing the last of the opt-outs who requested to rejoin the settlement to opt in

Judge Alejandro is acting on behalf of Judge Brody in an emergency capacity. https://t.co/QFJW59W47m

#NFL is stepping into a potential minefield in #concussion litigation with insurershttps://t.co/krb4dQvYIR

Strikes for Kids vs. NFL

MO Ct. of Appeals reinstates lawsuit against coach, after coach strapped up in full pads and injured student: https://t.co/NF3tNYOxhs

A bit of good news for a change:
Voters will decide on Cavaliers subsidy https://t.co/iuqQTckkuw via @dhellingsports

Arrest warrant issued for fake Lucky Whitehead, who doesn’t play for the Cowboys now either https://t.co/MDaZYAWNvs

This is a free event! All those in NH and surrounding states should make plans to attend.

“We wouldn’t let children smoke … cigarette, but then send them to a football field to sustain concussions?” https://t.co/txpqZY51EI

Former Youth Coach to Parents: Don’t Sign Your Kids Up for Football https://t.co/aoo5RZyhP9

“The NFL’s Worst Nightmare” – George Visger’s Battle With Brain Injuries & The Hypocrisy Of The NFL https://t.co/HVAcbRb0Hy via @ballsdotie

Football’s destiny awaits a brain-science breakthrough -&- and that could be 5-10 yrs. https://t.co/5SZhAsHHnc via @NoceraBV

Concussion law only as good as its enforcement https://t.co/C3i3wxM8ym via @seattletimes Players gets #PR & NFL Liability Protection. #TBI

McMahon tells parents: Keep your kids off the gridiron until they are juniors in high school. https://t.co/nmTb3Iy2vd

What other sport has destroyed so many of its’ ‘Greats’? Maybe boxing…but that’s a dubious club to belong to. https://t.co/mCTjXzFPNp

“I hope that by sharing my story some of them will not be embarrassed to seek help like I was for so long.” https://t.co/WARsokCjXS

How many are suffering and haven’t connected the dots? https://t.co/jUFfCTnKrK via @HuffPostSports

Brett Favre on concussions: ‘There’s a lot of fear’ https://t.co/61yoKn7lyK via @gbpressgazette

Editorial: Are we pushing our kids beyond the line of safety? HS football tragedy raises safety Qs, via @Newsday https://t.co/2QMsuKd85C

Why Was A Military Training Drill Used For A Voluntary High School Football Practice? https://t.co/QuhuAFTa9V via @sportstalkfla

On Josh Rosen and how strange it is to vilify an athlete for daring to honestly speak out about the system: https://t.co/E8UPtpgKyI pic.twitter.com/gTTLFkagyH

“[L]ittle of this is about Colin Kaepernick. It’s about the mirror he’s holding up to America.” https://t.co/VMENWfJd3Q via @MiamiHerald

Wow. It’s been a long while since I’ve read a @Kaepernick7 piece that gave me goosebumps. https://t.co/sVdeSFJhvy

#NFL: “collect your checks, get your concussions, and keep your mouths shut.” https://t.co/Or0ng4cVBy

Today would’ve been a good time to use your “fire and fury like the world has never seen” Don’t tell me you’re getting soft on terrorism now https://t.co/OaFHyJbTfl

Inept Union and Greedy Owners are a Toxic Mix in the NFL ? via @MullyET: https://t.co/gDHFT8Rjo5

60% of the league works for the minimum…Wow

Division I athletes sacrifice their future health-related quality of life for their brief athletic career in collegehttps://t.co/SgHS9WZ5g3

Just announced: @McCannSportsLaw will be a panelist at the “Sports Betting USA” conference in NYC (11/14-15)

No consensus outcome as the New Jersey sports betting case moves forward in the Supreme Court: https://t.co/ALEah8Ii4Q by @DRFHegarty

To me at least, this is scary – try getting critical, unbiased journalism from these sources:

The fastest growing employers of sports journalists five years from now will be:

Permanent link to this article: https://advocacyforfairnessinsports.org/2017/08/13/theblitz-august-13-2017/