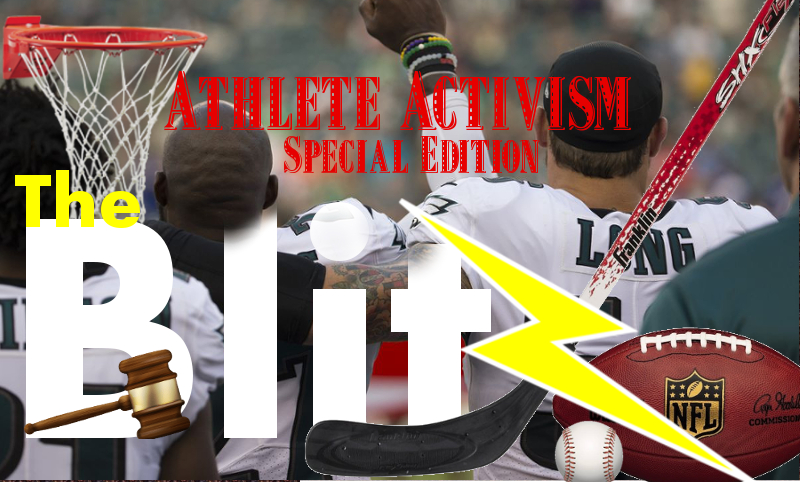 This special edition of “The Blitz” celebrates the bravery and conscience of those athletes who choose to use their platforms for important real-life issues social justice issues. ✊?✊?✊?✊✊? #Together

Michael Bennett on why he will continue to sit during anthem https://t.co/zo2F448JfC

imagine being told to quit yr job bc you don’t want people to be murdered in cold blood for having the gall to exist https://t.co/eKylhSrZwG

.@KingJames & @JOEL9ONE among athletes who react to the violence in Charlottesville https://t.co/mF7YfQvUGQ

America only needs one torch
It’s bigger and brighter than yours#Charlottesville ? pic.twitter.com/yDusNqFphW

Sad but not surprised by what’s happening in VA. Painful reminder that we need to stay woke & continue organizing against racism & hatred✊?

Michael Bennett: “A White Player Sitting for Anthem Would Get Things Changed” https://t.co/pN9K4kVg3k via @MikeChiari

Never met you, but respect the heck out of you Chris Long. pic.twitter.com/Kbi2P725UV

My latest piece @TheNation. “Chris Long With the Gesture We’ve Been Waiting For” https://t.co/UeUqDoNASn

“I’m here to show support as a White Athlete” & “White Supremacy: there’s no place for it”. Latest on Chris Long https://t.co/eaKcV84YL5

“Justice will not be served until those who are unaffected are as outraged as those who are”
-Ben Franklin pic.twitter.com/MSRtHDVRBe

I pray that those in positions of power and leadership use their stations to push love and justice to victory so that the people may rest.

I interviewed Marshawn Lynch & Michael Bennett’s agent to get more perspective on their responsibility as superstars https://t.co/PDrab2jesM

The NFL’s billionaire owners are too late to stop Colin Kaepernick: https://t.co/Nu8c7ILtLl via @josh_levin

I spoke to #Packers TE @MartysaurusRex after the game about his political cartoon, and the duality within activismhttps://t.co/ENtMbv481u pic.twitter.com/Dt2U60bdAw

This article by @freedarko on Kaepernick and his impact is one of the best I’ve seen. Don’t skip over this one. https://t.co/NvZ6CdLmdZ

Sitting with Kaepernick: Why these women are opting out of fantasy football https://t.co/2CLrwQiXpR via @espnW

Eric Reid speaks up about Kaepernick – it would help a team’s bottom line https://t.co/DGO4WxJNaV via @jenniferleechan @NinersNation

How Savannah and Lebron James Are Changing Lives in Their Hometown – nbyay: What started with 232 students… https://t.co/GhXR7ZRLEB

While this one isn’t exactly athlete activism, it’s far too important and relevant to pass by:

From Charlottesville to Kaepernick, white anger is all too familiar to my grandmother https://t.co/aNttFpkLB7

?? HeatherHeyer’s mother concludes: “I’d rather have my child, but by golly, if I gotta give her up, we’re gonna…” https://t.co/z5dJosjcHi pic.twitter.com/pA1y9FHAuB

Permanent link to this article: https://advocacyforfairnessinsports.org/2017/08/20/the-blitz-special-edition-athlete-activism/