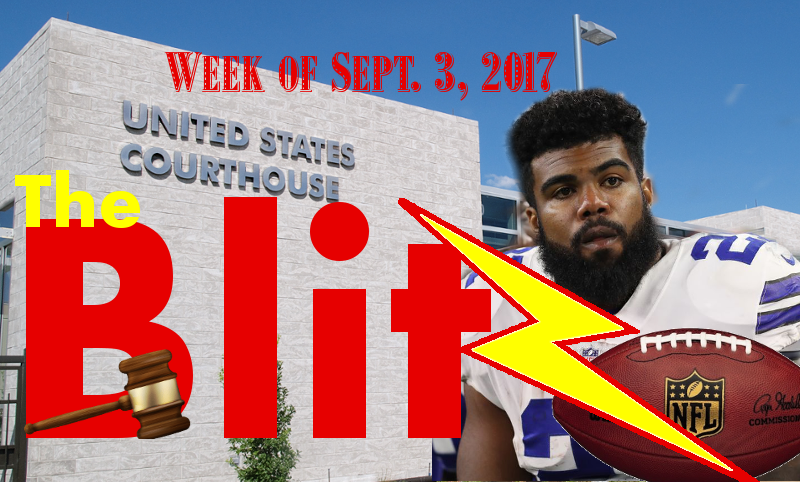 This week we have a tie:

High school football is 7 times more likely than lightning to cause catastrophic injury. Yet we clear the stadium at sound of thunder.

The first Ezekiel prophesied the destruction of Jerusalem. The current one may foretell an end to Goodell’s Kingdom.

Another tie; this time 3-way. There was no shortage of great journalism this week, so this was a tough cut, but I decided to go with the opinion pieces of Ed Cunningham, Evan Grossman and Steve Chapman because they truly express my own feelings about the NFL, and judging from some of the response I’m getting, many others have similar reservations. Helpful hint to NFL – If you want to improve your ratings and save your game, clean up your act and stop trying to whitewash it.

.@evan9rossman has some good reasons for quitting fantasy football. Worth the read.https://t.co/PjU2kRlWxP

Obviously, Ezekiel Elliott is grabbing this week’s biggest headlines.  It’s sometimes hard to  sort through all the massive amounts of media coverage, so I’ve compiled what I feel are the most essential stories and tweets in order to be up to speed with the legal battle ahead.  I think it’s also important to note that Ezekiel Elliott is a challenging case for two reasons (1) Accusations of domestic violence must be dealt with, and (2) the NFL’s discipline process which in Goodell’s reign has been arbitrary, reactionary, and capricious.  The CBA gives Goodell broad latitude in punishing players, often robbing them of the due process most citizens enjoy and all citizens should have access to.  For this reason, until more information comes to light, I’m not forming an opinion on the former, but focusing on the latter is definitely in need of repair in the NFL.  It’s also important to know who to follow in order to get the best information so here are my recommendations:

Have had the good info early

Events as they happened…
Monday:

Link to Ezekiel Elliott’s 911 call (made by his two NY attorneys, no less!) complaining of harrassment by accuser: https://t.co/mZhQ92bjyX

Links to Ezekiel Elliott’s harassment claims against his accuser:

Lawyer: This is Ezekiel Elliott’s strongest argument in his appeal, via @khairopoulos (includes my comments) https://t.co/g2anBW8jHF

Most of Tuesday was spent going through evidence & hearing from investigators. Today is Elliott. Tomorrow the doc speaks about the pictures

The appeals hearing for #Cowboys RB Ezekiel Elliott has wrapped up after 3 days & more than 25 hours. Harold Henderson is on the clock. ⚖️

Ezekiel Elliott will play Week One if there’s no ruling by Tuesday at 4:00 p.m. ET, via Mike Florio @ProFootballTalk https://t.co/NBmSW8xUTt

Key question: Will Harold Henderson send ruling to both sides simultaneously or does the #NFL get tipped off first?

This was definitely the question until a middle of the night court filing appeared.

My Q&A with the Dallas Morning News on the Ezekiel Elliott lawsuit and my lack of sleep, via @townbrad @dallasnews: https://t.co/sgc90YwPHh

Can #EzekielElliott beat #Article46? @McCannSportsLaw looks at what would be necessary for him to prevail. https://t.co/xjlHXdx5DA

Summons issued in Ezekiel Elliott lawsuit. When served, #NFL will have 21 days to answer. They won’t wait that long! pic.twitter.com/jxIof5bBaq

Was on the phone with @WALLACHLEGAL and he predicted a restraining order filing by NFLPA/Elliott. Five minutes later, it happened. Amazing.

Here is the full transcript of the Ezekiel Elliott arbitration before Harold Henderson: https://t.co/6YC5VuZGp4

I included this because:

Don’t be sidetracked. These are two separate issues of equal importance, NFL is interested in good PR and power – not in getting either right. Don’t buy the spin. Weigh the evidence as it comes out for yourself.

Excellent point regarding the power from Alan Milstein

@WALLACHLEGAL, Dan, it’s not that the NFL failed to learn anything from Deflategate; it was emboldened by it. That will be its comeuppance.

.@JarrettBell brings up the clause “credible evidence” in the CBA, Will it help #EzekielElliott? https://t.co/FXxnCQiSc3

NFL Seems To Have Punished Ezekiel Elliott For Not Cooperating With Its Investigation [Updated] https://t.co/EYIxfNa49R via @domcosentino

Sports litigator @amilst44 weighs in on the Ezekiel Elliott legal saga with a post of biblical proportions: https://t.co/GkGFTBZWmv

Paragraphs 54 through 58 will not be on Lisa Friel’s highlight reel: pic.twitter.com/0UctKQ5uR8

Paragraphs 62 and 63 focus on Henderson’s decision to bar accuser’s testimony and notes of her interviews: pic.twitter.com/AXtK3U6deX

“On the second day of the hearing, Friel testified, and the conspiracy became further exposed.” pic.twitter.com/rPJ9Ye0QB5

Best thing for NFL is to have Harold Henderson vacate suspension.

Game. Changer. Run for the hills. There is a reason the owner and GM felt he would be cleared. Maybe he got wind from investigator. https://t.co/ojsvJNrrDN

@CowboysNation @JoeyIckes @ShoreSportsNJ
So she discussed her concerns with NFL PR? Umm why is he even part if the investigative process? pic.twitter.com/2TWAsTeIDh

So they didn’t want to box Rog by including a recommendation (specifically no suspension) ~ allowing Rog the outcome they preferred? pic.twitter.com/1DuHE9USaj

Also interesting that one doctor backed out. Was it really “timing” or other reasons perhaps? https://t.co/exGPruOV7u

One possible tactic by NFL: if no arb decision by 4 pm Tues, argue no irreparable harm to Elliott (since he plays) & Texas case is premature

If Texas case dismissed on this basis, then later release of Henderson decision will trigger new courthouse race. https://t.co/T0DZRrJ572

This is a good look at Judge Mazzant, who will hear the Zeke Elliott case https://t.co/c1aiErfCQu

The judge in the Ezekiel Elliott case grew up in the 1970s — in the heart of Steelers Country https://t.co/YngLrKOjk6

Refers to the motion by @PatTighe asserting deficiency notices are the result of Claims Admin reading addl requirements into claim process https://t.co/DohrkmNZ3P

Locks claims a “greater breadth of experience and knowledge of claims process” than other Class Counsel or Steering Committee Counsel pic.twitter.com/Fev6B7HmjM

Like the RD Legal filing, both responses assert that Seeger failed to abide by Rules of Federal Civil Procedure.

This is not good for the players. Difficult to see how Judge Brody could rule against established Rules of Civil Procedure. pic.twitter.com/RjbDbQvavs

Additional serious issues addressed in this one:

Objection states that no expert witness should be required. . . pic.twitter.com/fUBsVRbgmS

Objection notes that costs will be needlessly increased by appointment of an expert witness. pic.twitter.com/BcAaj3xPjG

Instead objection states Class Counsel should submit to discovery in order for the court to objectively determine division of common fund pic.twitter.com/hw9RrKqDWe

“Players’ claims are moving at a snail’s pace while Class Counsel
attempt to move their fee petition as the wind.” pic.twitter.com/Iubrypsujz

A newly filed 2-page QMJHL player contract, outlining “employment and duties of player[s],” will be key evidence if CHL cases go to trial.

The OHL and WHL cases have both been certified as class action lawsuits but are on hold for the moment pending appeals. https://t.co/ySCZ6X2h48

Difficulty to believe NFL does anything “independently” and not rooted in profit, thus what he said.⬇️⬇️⬇️ https://t.co/KCKOGYLzvA

This shIt is all a facade. They’ll spend $40 Million on “research” but won’t spend $40,000 on a retired homeless player living with CTE? https://t.co/hahoOPip7r

“Is my timing bad…When would you prefer to have your lecture?” Great points from @scottostler https://t.co/PmkJebHdJ6 via @sfchronicle

The NFL is running out of junk science to peddle https://t.co/muToT7qveM via @dhellingsports

How American football is learning from tobacco industry on how to deal with its own health scandal #CTE https://t.co/7UFgQzJ6bd

Bills down to one quarterback without a concussion https://t.co/i1Onr500NR

We need to study CTE from every angle. I applaud those getting involved in the fight against this disease. https://t.co/YExGIAEmpi

Ryan Hoffman was a great football player. Please share this wonderful story. “There’s Something Wrong with Me.” https://t.co/MudapcJcvo

Reggie Williams Opens Up About His Journey from #NFL Star to Cannabis Activist https://t.co/fdGjuOVRKu

A California high school football player is in a medically induced coma after surgery to remove swelling in his bra… https://t.co/wXO5xRMBgr

For @NavyFB players, dress shoes are part of academy life. They also may be causing foot injuries. #Mids https://t.co/huHaLMESgI

.#Depression and Professional Football: How Should Players Be Protected? https://t.co/wR0bTnfiJ4 via @RollingStone #TBI #CTE #NFLPA??????

.@MarkMaske‘s report is troubling. Another deal in the dark when fresh #NFLPA leadership is sorely needed. https://t.co/NyaLkWTrmA

“Hey, #NFL players: The message should be clear by now. The next one could be you.” https://t.co/rDBgvidL28 via @SeifertESPN

NFLPA Continues To Ignore The Awful CBA It Agreed To https://t.co/ltbLfPD2iI via @thelegalblitz

He shouldn’t have to tweet this. NFL players should have health insurance for life like those in NBA and MLB. Also those benefits kick in from day one instead of as in the NFL having to wait 3 years to vest.

Major #NFLPA developments this week. Check out this special edition Blitz and make sure you’re in the know.https://t.co/2uZxUkHEuD

On Saturday, all teams were required to pare down to 53-man squads, releasing numerous players.

?NFL PLAYERS WHO GET CUT
1. Get all your medical records
2. Go home
3. File unemployment on Monday
4. File workers Comp on Monday
5. Workout https://t.co/umVIxJjYFJ

And check on you severance $ too. Lotta teams not gonna just cut the check and send it to you. Lotta guys don’t even know they’re owed it

In addition to these cuts, many more will loose their jobs as some of those cut breath a sign of relief when some under 3-year guys will be picked up on waivers and some 3+ year guys will sign with new teams as free agents.

An NFL Players daughter fought long and won her dad’s NFL benefits. It’s a shame that people have to go through so many hoops https://t.co/WjR6LKbZym

Thrilled to be able to share some good news! Mary worked her tail off & navigated the road blocks but dad, George now has his NFL benefits! pic.twitter.com/ihv7hVgZYe

If you’re an NFL retiree who needs some support, please reach out. Some of us actually do believe #FootballIsFamily https://t.co/l1OZ5zVKri

NFLPA protects Burfict at the peril of his fellow players. https://t.co/swR98HDwEE via @nypostsports

George F. Will: Football’s enjoyment is on a fade pattern, via @sltrib https://t.co/auIvMBp9Ln

Recovery efforts from Hurricane Harvey will be massive.
We must come together to help rebuild our communities.https://t.co/SR6DmnNbyM pic.twitter.com/iiMsG2i4dl

Just continue to let this soak in. In just 72 hours @JJWatt has raised over $6 million from over 65,000 people.
Amazing.

If he only stuck to sports. https://t.co/y8bbgaOg4W

Quick update of where we’re at right now… pic.twitter.com/a105oYRv3A

Guest column: The true Colin Kaepernick … from someone who has been there and calls him a friend – The Athletic https://t.co/Jq0dp6JZwc

Chalk one up for the tax-payers (finally) @dhellingsports has been on top of this one all the way! https://t.co/Qnot3kzfkU

The four amici curiae are:

Next up in NJ sports betting case:

The NFL May Not Like Sports Betting, But It Definitely Isn’t Opposed To Gambling , via @LSPReport – https://t.co/MGp2uKdoJu

Permanent link to this article: https://advocacyforfairnessinsports.org/2017/09/03/the-blitz-3/