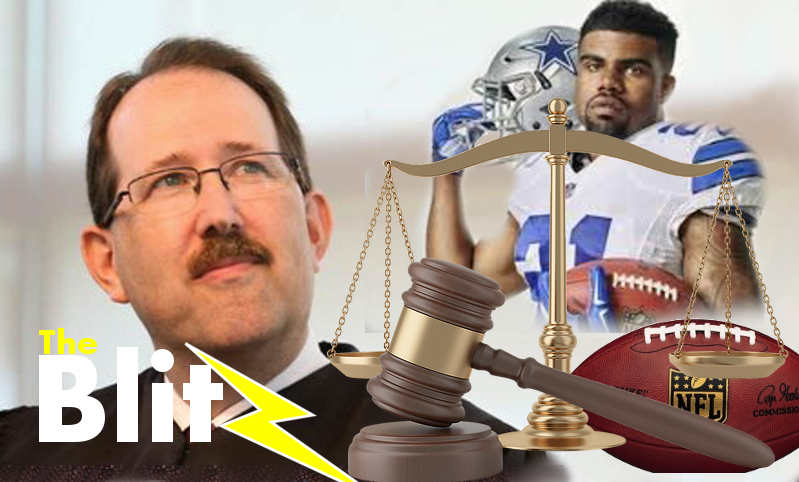 ?Tweets of the Week:

Labor needs to focus on modernizing Labor Laws to balance the inequalities politicians have legislated away from Labor on behalf of donors!

You see this @NFLPA? The NFL is telling you that you handed Roger Goodell your entire livelihood and he can do whatever he wants with it. https://t.co/duAeTxFOtY

NFL faces uphill battle in obtaining an “emergency stay” from the 5th Circuit in the Elliott case. My take: https://t.co/TmfxXantYe

Ezekiel Elliott news dominated the week. Here’s a day-by-day replay along with a new Twitter Moment that encapsulates the best legal commentary from the week.

ALERT courtroom source to me: Judge Mazzant just askd #NFL if #EzekielElliott is onfield for #Cowboys this wk, even if HH rules. Answer: YES pic.twitter.com/oxp5J3xsDM

Official word that Zeke Elliott’s 6-game suspension was upheld came with 5-10 minutes to go in the court hearing tonight.

Probably my favorite tweet coming out of Tuesday’s hearing:

Apropos of nothing, Nash complained of spending a weekend in hearings with Henderson. Judge: “I spend all weekend reading it.”

In the midst of all the Texas drama, the NFL filed a lawsuit in New York, asking the court to impose the suspension. Deja vu Tom Brady. The venue war begins.

I guess we will soon find out which venue (Texas or NY) is the “first-filed” lawsuit. My money is on Texas, since NFLPA could amend lawsuit.

@StephStradley details the “real & sick harm” NFL is doing to many people w/their everything is a hammer approach. – https://t.co/r3Poq5EHbe

NFL’s 4-page lawsuit vs. NFLPA makes no reference to Texas action. Would be surprised if this isn’t bounced soon. https://t.co/36a8VkrEL9

Here are key questions, answers and deadlines about what comes next for Ezekiel Elliott, via @khairopoulos (+ me): https://t.co/oMPPpYMVRP

With issues fully briefed & extensive oral argument, I expect Judge Mazzant to bypass the TRO and go straight to a preliminary injunction.

@McCannSportsLaw looks at next legal steps for #EzekielElliott; says he must “run the table” to prevail https://t.co/Z3MMRvWR8S

Does Roger Goodell have to make such an unholy stinking mess of things EVERY time? #CowboysNation #PatriotsNation https://t.co/xzZ9M2bcGF

Why Ezekiel Elliott could have advantage vs. NFL that Tom Brady didn’t in ‘Deflategate’, via @khairopoulos (+ me): https://t.co/pV1hYyXyQy

Will Ezekiel Elliot win a TRO in court today?

NFL faces uphill battle in getting emergency stay b/c no “time machine” for lost games, via @khairopoulos (+ me): https://t.co/Rvr7VHPIcW

All the other essential legal takes rounded up right here!

Michael Bennett May File Lawsuit against LVPD https://t.co/9HuAv5O1xk via @McCannSportsLaw looks at his legal options.

Looking forward to discovery:
The suit that the #NHL offered $325,000 to go away https://t.co/NS74UMVrBX via @dhellingsports

Judge in Eli Manning memorabilia case asked to step aside — again, via @jimbaumbach (with insights from @amilst44): https://t.co/6TyzIAccwj

Background on the football brain injury study of CFL alumni commissioned by the daily paper in Hamilton, Ontario. https://t.co/KL8OgnUtdC

If the hope is no scientists/physicians will sell their integrity to do NFL’s bidding the effort is already doomedhttps://t.co/O86jJOdad2

Number of hits to the head Texas Tech offensive lineman suffered in one “typical day” of practice: 100. pic.twitter.com/Yk5BYJdQEx

My question – What’s Maroon doing trying to “educate” anyone on head trauma? Corbin was right to intervene. https://t.co/VRgUncJgsb

Part 1 of a retired #NFL player’s battle with dementia and his daughter’s quest for his benefits via @RequiemRB https://t.co/cgKWERyycZ

I find the 2nd paragraph of this offensive but concur w/ the author’s larger conclusions & observations https://t.co/oHljDfRBL5 via @Newsmax

This is a big story that’s largely flown under the radar. I interviewed Cyrus last week and will be publishing some insights on the peculiar manner in which the constitution was amended as well as the focus of Mehri’s platform.

Prior to Mehri’s release of the new constitution, the NFLPA kept the 2007 version on their website, leading a belief that elections would be held in March.

Interesting to note that NFLPA has now added a link to the Constitution on their website. Competition is good! #LaborDay2017 https://t.co/njnnRu19he

?Of course we still crave football, but it’s getting tougher and tougher to ignore the brutality: @Lisa_Olson1 https://t.co/OnBWfAaNcw

Hundreds of players who were in NFL two days ago now with no pro football alternatives. Wrote on need for D League: https://t.co/5OKXQqVQTx

Le’Veon Bell says preseason holdout wasn’t about money but this one simple fact https://t.co/wMDqfxJv5T via @ryanwilson_07

Prosecutors decided in July not to charge Michael Irvin with sexual assault, but the NFL is still investigating https://t.co/guf3ABsBHu

Only 37 year old. How many more suicides will it take? ?Prayers for Drew & his family #RIP https://t.co/VrktDDfnEB via @denverpost

The NHL opted not to file a request w Nevada Gaming Commission to have Golden Knights games taken off betting board.https://t.co/M5TzIZqBbj

Story by @Jesse_Kramer shows how #NCAA schools are becoming more like #NFL‘s return to play culture https://t.co/GQa0IG5JFM via @thecomeback

Thanks and congratulations to J.J. Watt for some off the charts fundraising and support for Houston!

Your generosity knows no bounds. Thank you. https://t.co/SR6DmnNbyM

From #TheJump: You can’t praise athletes for caring about their community in a storm, but blast them for caring in other ways thru the year. pic.twitter.com/4H6vaFjeKs

I stand with @mosesbread72 on this one as a veteran I don’t respect the Vegas PD at all. pic.twitter.com/9HDoSfCIyX

From @MartysaurusRex Instagram regarding police brutality against his brother @mosesbread72 . ?for them & others who’ve had to endure. pic.twitter.com/50elPrpbCS

A video has emerged showing a portion of Michael Bennett’s encounter with Las Vegas police https://t.co/iNmTbNPnpo

“You have to let the public know what happened to you that night.” Michael Bennett Sr. (exclusively) to @Ben_Baskin https://t.co/cAGkCJqhtu

Kaepernick “Divisive and so galvanizing, so scorned and so appreciated” Masterful narrative from @JohnBranchNYT https://t.co/kQIAvf6TI6

NFL is vulnerable to Kaepernick boycott, thanks, in part, to this Alabama pastor https://t.co/TXjbxdAMgX via @roysj #NFLBlackOut

In our own words. This is not about protest. This is about reform. #PlayersCoalition pic.twitter.com/c8jLkqPD7T

On the @PlayersTribune, @TakeoSpikes51 challenges athletes to confront inequality and become part of the solution. https://t.co/dk0zdz4Ipa

Almost 50 years before Kaepernick’s protest, one NFL player made a similar statement https://t.co/aYxoO05vRT via @eric_adelson

This is important. SCOTUS ruling will essentially determine who is more powerful – states and their citizens or sports leagues pic.twitter.com/Qpnb3Cne47