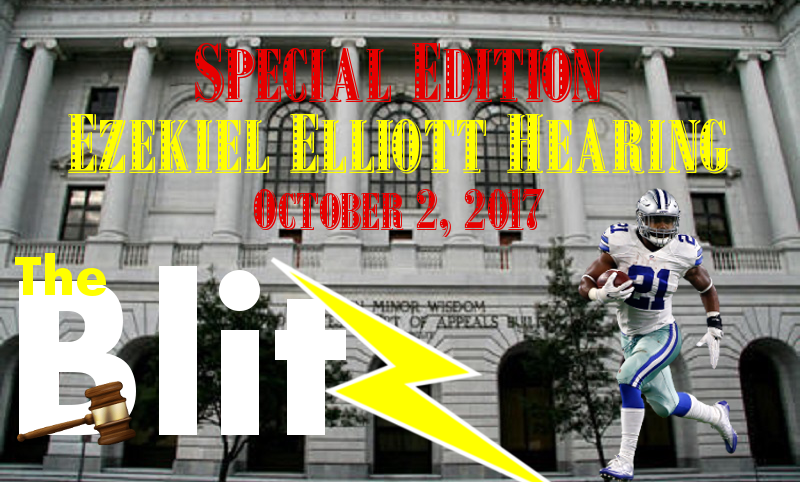 A hearing took place in a Fifth Circuit courtroom at 1:00 PM October second to determine a number of vital issues that will determine his availability as the season progresses.  The NFL asked the court for two things (1) a stay on Judge Mazzant’s injunction which has allowed Elliott to play thus far this season and (2) a decision dismissing the case on its merits.  The hearing lasted about an hour and no decisions were rendered at the hearing, but Judge Prado closed by stating that the court would issue its decision “as soon as we can.”  Here’s a Twitter wrap-up of what took place:

Ezekiel Elliott is not attending today’s oral arguments in the 5th Circuit.

The 3-judge panel peppered both sides with a lot of questions, particularly Jennifer Walker Elrod.

Kessler said the NFL never went for an emergency stay in Brady case & he played all season. So where was irreparable harm done to CBA?

In court, Kessler said discovery would be to see if “credible evidence” standard met. Need to know what Commissioner knew about the evidence

NFL cited this being one of the first times the new policy has played out. Said it can’t say what typical procedure is. https://t.co/D9DCq7LJ4D

Key question from panel to Zeke/NFLPA side: Has any court accepted argument a lawsuit can be filed before arbitrator issues decision?

“When the tractor trailer is running at your house, you don’t have to wait to get run over.” – Kessler on the exhaustion arguments.

Judge Graves asked NFL if Labor Management Relations Act requires “exhaustion” or arbitration to be issued. “So the answer is no?”

Judge Elrod zeroed in: Why did Elliott and NFLPA not file here After arbitration decision announced.

Judge Elrod asked about Elliott claim that needed to file in Texas: why is this futile if u can make arguments in New York?

Kessler introduced a new precedent at last minute and she gave him the what for for not giving it to NFL earlier.

Major issue: Exhaustion. (Not my exhaustion)
Did NFLPA and Elliott exhaust all of their legal remedies under the Collective Bargaining Agreement before filing In Texas Federal Court

Last comment was made by Judge Edward C. Prado: “We will try to get back to you as soon as we can” , in addressing the Attorneys for both sides at the conclusion of oral arguments.

Elrod backs NFL. Graves is for PA. Prado is the swing. He doesn’t like premature filing, but has issues with NFL’s irreparable harm.

Audio for the hearing was expected to drop at 5:00 PM and arrived as scheduled.

The NFL v. NFLPA audio is out. https://t.co/QUAWhmWn0q @WALLACHLEGAL @IanPGunn

Mike Florio on how Kessler should have answered Judge Elrod’s question on why #NFLPA filed suit prior to the award: pic.twitter.com/hwLUEnWHeQ

Great summary of hearing from Kate Hairopoulos. Another audio of the hearing is also included here.

An inside look into Ezekiel Elliott’s court hearing, plus a timetable for decision on RB’s playing status https://t.co/qDJgPaoRTP

After the hearing, around 10:00 PM EDT, Jeffrey Kessler filed a letter detailing the “new” case law presented for the first time earlier at the hearing.

For addition coverage of the wide world of sports law check out the regular edition of “The Blitz.”

Permanent link to this article: https://advocacyforfairnessinsports.org/2017/10/02/the-blitz-10217-ezekiel-elliott-hearing-special-edition/