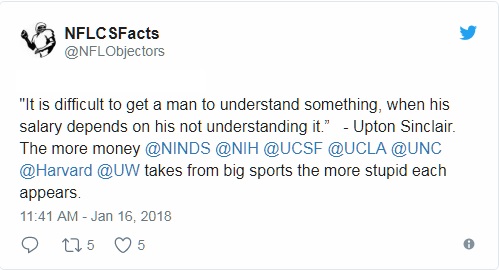 “If you asked the 20,000 retirees who are part of the class, they would say Mike Webster should be paid first.”

But Webster’s family has been cut out of the $1 billion N.F.L. concussion settlement. https://t.co/QgsKrz4rHs

A new #NFL #Concussion Settlement Claims Report has been posted to the Settlement website. https://t.co/TIJQN1zm5y

In a nutshell – Good news is checks have apparently been cut for 31 previously approved claims. Bad news is only 3 more claims have been approved (2 Alzheimer’s and 1 Parkinson’s) Eleven months into the claims process this is over 650 fewer than first year projections. https://t.co/REUmHMMAfH

NCAA, Athletes Draw Questions From Judge Over Pay for Playhttps://t.co/ZoUwGhBeDU

Raising her hand to join #MeToo, Simone Biles talked. How much longer will USA Gymnastics fail to listen? https://t.co/wZ3Yi62CjG

Ally Raisman to Larry Nassar: “You do realize now the women you so heartlessly abused over such a long period of time are now a force, and you are nothing.”

The moving video of her testimony (via @lindseyadler) here: https://t.co/gA2GIkDGO0

“USA Gymnastics has terminated its agreement with the Karolyi Ranch in Huntsville, Texas. It will no longer serve as the USA Gymnastics National Team Training Center.

Should non-disclosure agreements signed by sexual assault victims be enforced against them? Should the NCAA punish Michigan State in light of the NCAA’s Penn State precedent? My @SInow legal take on these and other consequences of the Larry Nassar scandal: https://t.co/kNpWcV15he pic.twitter.com/3TSAOXURnq

A fan ejected from the Eagles-Falcons game was arrested for punching a police horse in the face, neck and shoulder area. https://t.co/N1n1jUuWhs

Profile of 14 #NFL players with #CTE https://t.co/rPMffEFy05 via @cbsnews

#49ers great Dwight Clark upbeat but acknowledges reality of ALS: ‘The future is so scary, I can’t imagine being totally paralyzed’ https://t.co/eI8puQltHT via @mercnews

Who cares who wins the Super Bowl? Let’s talk about CTE https://t.co/lqEv4DQ6mb via @TheCurrentNSU pic.twitter.com/duoeNJFfpB

A Single Season Of Football Can Change A Kid’s Brain, New Research Shows. “All of our studies are pointing towards subconcussive impacts causing a change in the brain.” https://t.co/mJHENLOaUH

Eric Lindros believes #NHL needs to build a ‘stronger base’ of research on the issue of concussions https://t.co/YM1U7T7s24 via @Michael_Traikos

A new study shows that hits to the head, not concussions, cause CTE https://t.co/pcxor0SmFV

Nick Buoniconti advises no football until high school –
be sure to check out the video https://t.co/DvvcucArSW via @SINow

Kevin Stevens “had a problem with Percocet, Vicodin and Oxycodone since team doctors prescribed him the drug[s] in the mid-1990s.”
Thanks to Stevens for sharing his story & hat tip to @RobsonDan and @DavidAmber for solid reporting. https://t.co/vKYnJBcwEW

The #NFL Gives Away Opioids Like Candy but is Against the Use of Marijuana. Does That Make Sense? https://t.co/QFMnk0gVyH via @Gruelingtruth

Former #NFLer @boowilliams82 talks about his struggles with #TBI and how he was helped by cannabishttps://t.co/6rQ3VXrMoe pic.twitter.com/dPNTrpPQ31

.@dhellingsports interview with Tamarick Vanover reveals yet another story of a disposable #NFL player – and one betrayed by the #NFLPAhttps://t.co/ti7cf6riix

“Youth living in communities characterised by low educational attainment are less likely than other youth to have the option of a lower contact alternative to tackle football.” https://t.co/RkhDLfn965

“Suffering in silence: Tyler Hilinski battled his demons, but he’s not alone” Addresses the unique pressures of football in relation to mental illness. And this doesn’t even take into consideration the added challenge of brain injury. https://t.co/i55HlWFeje

How to Save Football Players’ Brains, by Paul S. Auerbach @Stanford https://t.co/TOKqwtIe5m via @WSJ

.@Kaepernick7 makes good on final $100K of $1M pledge – will announce 10 recipients of $10K each to be matched by another celebrity ??https://t.co/dsjNj7zMsN via @darrenrovell

Colin Kaepernick Has Done More for the 99 Percent Than the President of the United States https://t.co/ZOuSG3JWAC via @TheRoot

Miracle finish not enough to save #NFL playoff ratings https://t.co/z6YbSv9JqB via @nypost

Joe Lockhart has informed the NFL that he is leaving the league. He has been the NFL’s executive vice president of communications and public affairs for two years… https://t.co/NHlHQk3bcE

Some #NHL teams hide injury information, but it might be hurting players https://t.co/bbBX53cMo2

The prospects for daily fantasy sports in a regulated sports betting environment, via @novy_williams & @iboudway (with insights from me): https://t.co/SRoIbKXwwy

The latest from @SportsLawProf: Horse racing and sports betting have a lot in common. https://t.co/c12QGIGlRb

Did Mississippi legislators do a back flip?
New Mississippi Sports Betting Bill Would Ban — Yes Ban — Wagering , via @LSPReport – https://t.co/uWKy7hDMtE

A FIFA referee manipulating goal totals in a World Cup qualifying match may never have been caught without sports betting data monitoring https://t.co/1EM4PThwiz

One-armed DC sports legend Gary Mays has passed away. I wrote about him a few years ago, and if you’ve never heard his story, trust me – it’s so worth your time: https://t.co/wP0fI6IcPb