I’m a bit behind in updating the blog homepage, so here’s a recap of our most recent work and also a few blasts from the past and other tidbits of interest.  ~Sheilla

NFL Concussion Settlement Opt-Out cases are back in the news – sort of.  While not receiving mainstream news coverage some important developments are taking place within the court.  A recent, and to my knowledge unreported development outside Law360 and here is Judge Brody’s decision to issue an order demanding medical records of the majority of opt-out plaintiffs. This is a ruling of great significance that could result in many cases being tossed without having the benefit of complete motion practice, mutual discovery, or trial.  I explain in detail here:

Judge Hurls Lone Pine Order at NFL Concussion Settlement Opt-Outs. Could this be an axe to their cases? 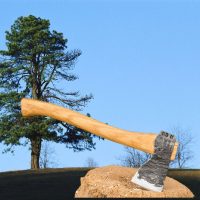 True or False? The Constitution of the United States of America guarantees every injured party his or her day in court?  You’d have been correct with either answer.  While the Constitution does make that guarantee, other laws and pleading rules tend to cloud it. That’s the situation players who opted out of the NFL Concussion Settlement are looking at due to a recently filed order. Read More about “Judge Hurls Lone Pine Order at NFL Concussion Settlement Opt-Outs. Could this be an axe to their cases?”…

END_OF_DOCUMENT_TOKEN_TO_BE_REPLACED

At the present time, the lawsuit filed on behalf of the daughter of Aaron Hernandez is considered an opt-out, although Hernandez neither opted into or out of the settlement, and has filed claims substantially different from most others in the opt-out designation.   I’ve analyzed recent motions in this case that will likely keep it afloat or torpedo it. 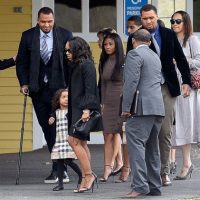 END_OF_DOCUMENT_TOKEN_TO_BE_REPLACED

One group of opt-out players, who spent their careers with Missouri teams have filed claims based on state law against the Chiefs and Cardinals.  This article was written before oral arguments were held in April 2018.  No additional information is available on the public docket in respect to this case, but the arguments are summarized here: 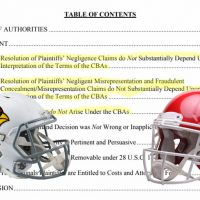 In Part 1 of this series I detailed how §301 of the Labor Management Relations Act is the NFL’s number one go-to defense.  This provision brings cases filed in various state courts against the league into federal jurisdiction when reliance on CBA interpretation is necessary.  Often when the NFL successfully invokes this provision, especially in lawsuits involving retired players, there is no legal standing for the lawsuit under the CBA and the case is dismissed typically without extensive exploration the merits and allegations of illegal or unethical conduct. Read More about “NFL Concussion Settlement Opt-Out Plaintiffs Take on Chiefs & Cardinals”…

END_OF_DOCUMENT_TOKEN_TO_BE_REPLACED

Retired NFL players are not the only athletes facing challenges in having their league accountable for brain injuries the dangers of which were hidden and mishandled. The proposed class action against the National Hockey League failed to receive class certification, leaving the players and their claims in limbo.  Derek and I teamed up for a two-part series analyzing the denial of class certification and projecting the road ahead. 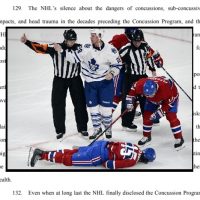 Last Friday, Judge Susan Richard Nelson issued a decision denying class certification in the NHL Concussion Litigation, consolidated in Minnesota District Court in August 2014. The case revolves around claims that the NHL has concealed the risks and dangers of brain damage inherent to the sport of professional hockey for decades, as well as rendering improper diagnoses and treatment, prioritizing profit at the expense of the health and safety of those playing the game. Part I of this series analyses Judge Nelson’s ruling and how the case arrived at this point, and Part II will analyze the impact of the ruling and what the players must prove in order to prevail. Read More about “Class Certification Denied in NHL Concussion Litigation – An analysis of the decision and future implications”…

END_OF_DOCUMENT_TOKEN_TO_BE_REPLACED 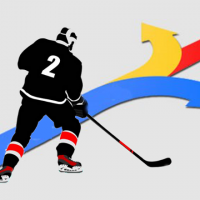 If no appeal is filed, the burden of “pushing the puck” of NHL concussion litigation further “up the ice” toward the goal lies even more firmly on the shoulders of the current and former players who feel they have been wronged. In comments to Hockey News, Stuart Davidson, another attorney representing the players stated, “walking away is not an option,” and hinted that the Steve Montador wrongful death suit may be the first individual case to go to trial.  Comments from William Gibbs of Corboy and Demetrio, who individually represents the Montador estate, seemed to confirm. Read More about “What’s next for retired NHL players in their quest for brain injury accountability?”…

END_OF_DOCUMENT_TOKEN_TO_BE_REPLACED

Retired NFL players who did not opt out of the settlement have seen a slight uptick of claims approvals, but continue to face challenges. See the thread below for more information (click to expand).

One example of the less than accurate actuaries, is that ALS claims submitted & approved have already exceeded 65 yr. projections. This is a huge reason for the higher dollars along with more Death with CTE claims than anticipated. https://t.co/OwYCQEWy1F

Settlement claims reports have been revamped and have been consolidated with other reports in a summary report.  I wrote about the changes here. 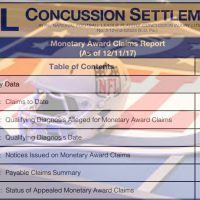 In keeping with Judge Anita Brody’s announcement following a closed hearing with Chris Seeger, NFL Counsel, and Special Masters, a claims report dated December 11, 2017 has been posted to the settlement website.  The seven-page PDF document  which details the current status of claims highlights numerous issues in the settlement, not the least of which is a mere 10% approval of submitted claims. Read More about “NFL Concussion Settlement Claims Report:”…

END_OF_DOCUMENT_TOKEN_TO_BE_REPLACED

Shortly after I wrote the article above, Claims Administrator Brown Greer submitted a status report that explained the changes in detail as well as adding additional relevant information.  The report is embedded below:

Permanent link to this article: https://advocacyforfairnessinsports.org/2018/08/01/updates/