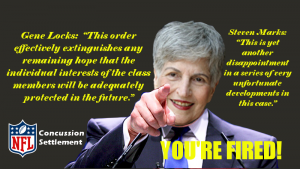 The reasons stated in the order appear to be a smokescreen in that no class counsel are paid unless assigned work by Chis Seeger or Judge Brody.

END_OF_DOCUMENT_TOKEN_TO_BE_REPLACED

Outside the concussion settlement, another terrible injustice is being exposed in Olympic Taekwondo.

END_OF_DOCUMENT_TOKEN_TO_BE_REPLACED

Permanent link to this article: https://advocacyforfairnessinsports.org/2019/05/25/youre-fired/