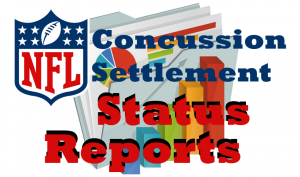 Three status reports were released on Monday, detailing various aspects of the NFL Concussion Settlement; one each from the Special Masters, Claims Administrator, and BAP Administrator.  The reports provide a great deal of information, and the BAP report is especially revealing.

END_OF_DOCUMENT_TOKEN_TO_BE_REPLACED

In other NFL Lawsuit news, Richard Dent has appealed the denial of his proposed class action painkiller lawsuit to the Third Circuit as noted below.

His appeal has now been docketed at the Ninth Circuit as Case No. 19-16017. The appellant brief is due on August 22. (Yes, I marked this one on my calendar so I'm not caught with my pants down again! ?)
Here's hoping for success at the Ninth! ?? pic.twitter.com/JTs6Baqvq7

Permanent link to this article: https://advocacyforfairnessinsports.org/2019/06/03/latest-nfl-concussion-settlement-status-reports-released/