What do the Packers’ financials reveal about the NFL Concussion Settlement? 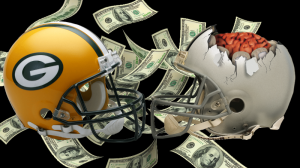 On July 12, Daniel Kaplan of the Athletic reported on a staggering drop in profits for the Green Bay Packers as revealed in their 2018 Financial Report.

This was a huge departure from the prior financials, in which the team gained $75 million in profit from operations in 2016 and $65.3 million in 2017. Since the publicly owned Packers are the only team required to release financial reports, their reports have often been viewed as a barometer for the NFL as a whole. The NFL Concussion Settlement was cited as one of their increased expenses.

END_OF_DOCUMENT_TOKEN_TO_BE_REPLACED

Permanent link to this article: https://advocacyforfairnessinsports.org/2019/07/14/what-do-the-packers-financials-reveal-about-the-nfl-concussion-settlement/