NFL Disability Pulls Rug From Under Player Disabled Since ’82

NFL Disability Feeds Another Player to the Lions 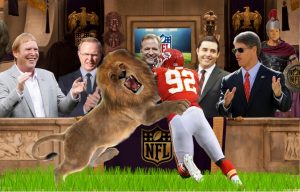 Speaking of Throwing Players to the Lions… 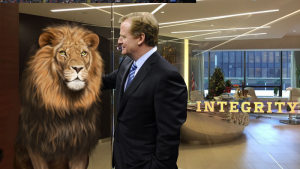 The  NFL Concussion Settlement has done more than its share.  Today Amon and Roxanne Gordon, represented by Wendy Fleishman of Lieff Cabraser filed an appeal of the denial of Amon’s settlement award after the NFL was given four times to challenge it and attempt to discredit his diagnosis.  Their claim is the first to be taken all the way to the Third Circuit.  Wishing them much success in arguing their case.  Click below to read the Notice of Appeal

Amon Gordon Notice of Appeal to the Third Circuit

And here’s the background on how Amon’s thrice approved claim came to be denied.

If there’s one thing consistent about the NFL, it’s their passion in denying benefits to former players. Roxanne Gordon described how the NFL fought and fought until her husband Amon’s thrice approved claim was denied when the NFL was given a 4th bite at the apple, and then backed up with a final denial by Judge Anita B. Brody on July 2.
Judge Brody’s order was cryptic at best, alluding to references that were no where to be found. She did not attach supporting documents with the arguments she viewed just as she didn’t in two rulings on June 13, which I wrote about shortly afterward. The article had barely been published when I was contacted by Kendra Stabler Moyes, daughter of beloved Raiders quarterback Ken Stabler, to tell me one of those denials was her father’s claim. Now the family affected by Judge Brody’s most recent ruling has come forward.

END_OF_DOCUMENT_TOKEN_TO_BE_REPLACED

Permanent link to this article: https://advocacyforfairnessinsports.org/2019/07/29/nfl-disability-feeds-another-player-to-the-lions/