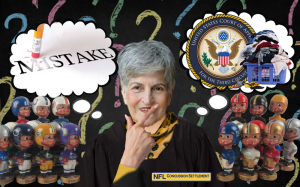 Amon Gordon was a defensive lineman for 9 seasons in the NFL, shuffling from team to team as his injuries began to accrue. He never entered the higher echelon of the pay NFL pay scale and often worked for league minimums as he battled through surgeries for various orthopedic injuries and rehab became a way of life. What did he get for his time in the NFL aside from a whirlwind tour of 11 cities with repeat stops in Nashville and Seattle over the course of his 9 years in the league?

END_OF_DOCUMENT_TOKEN_TO_BE_REPLACED

Permanent link to this article: https://advocacyforfairnessinsports.org/2019/08/27/correct-the-mistake-motion-tells-the-court/