What’s Next in the Face-Off Between Kaepernick and the NFL? 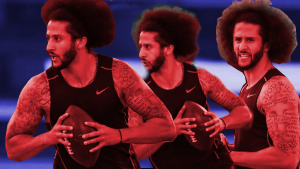 When Colin Kaepernick first tweeted about the invitation he had just received via his team, from the NFL to participate in a private workout in front of franchise executives 4 days later, to many it sounded like a step in the right direction from a league that had essentially turned its back on him for the past 3 years. It came out of the blue, however, and that alone was enough to invite skepticism as to the motivation behind it. There has been speculation that Jay-Z, who with his Roc Nation agency has embarked on a partnership with the NFL earlier this year with musical and social justice angles, had something to do with the decision, but that has neither been confirmed or denied by Jay-Z, his representatives or the league.

END_OF_DOCUMENT_TOKEN_TO_BE_REPLACED

Permanent link to this article: https://advocacyforfairnessinsports.org/2019/11/19/whats-next-in-the-face-off-between-kaepernick-and-the-nfl/