Regarding the proposed NFL/NFLPA CBA, #JustSayNo 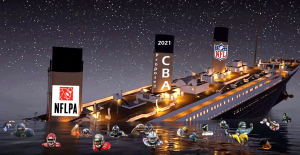 It was an interesting 24 hours.  During this time the NFL voted to adopt a proposed CBA and a vote was to be taken by the NFLPA executive committee.  Conflicting reports sprang from there.  The NFLPA’s official statement is that no vote was taken, however, according to Tom Pelissero a vote was taken and it was 6-5 against adopting the proposed CBA.

END_OF_DOCUMENT_TOKEN_TO_BE_REPLACED

Permanent link to this article: https://advocacyforfairnessinsports.org/2020/02/22/regarding-the-proposed-nfl-nflpa-cba-justsayno/