Sometimes the Best Move is No Move 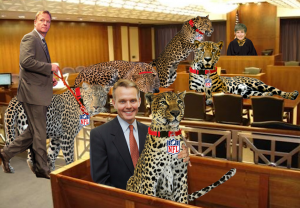 It’s hard to tell when you observe the attack on Amon Gordon’s dementia claim.

Courtroom or Leopard Lounge? When you consider the NFL and its highly paid Paul Weiss lawyers are the symbolic leopards in this picture it’s really hard to tell the difference. There’s an adage among lawyers that says, “If the facts are on your side, argue the facts. If the law is on your side argue the law. If neither the facts nor the law is on your side, yell the loudest.” Brad Karp and Bruce Birenboim of Paul Weiss have refined the latter to an art in their representation of the NFL, along with developing mastery in deflecting away from the real issues their opponents raise while reiterating a one-sided refrain that repeats over and over until the officers of the court are sufficiently programmed to sing along.

Perhaps nothing illustrates this better than their latest briefing in the Amon Gordon appeal.

END_OF_DOCUMENT_TOKEN_TO_BE_REPLACED

Permanent link to this article: https://advocacyforfairnessinsports.org/2020/02/25/courtroom-or-leopard-lounge/