Permanent link to this article: https://advocacyforfairnessinsports.org/archive/nflpa-painkiller-grievance/ 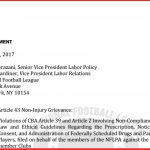 May 9, 2017
Sheilla Dingus
@SheillaDingus In an unusual legal twist, NFL Counsel Paul Clement filed a letter with the Ninth Circuit Court of Appeals on Monday citing a grievance against the NFL and its Clubs by the NFLPA. The grievance claims violations of the CBA in … 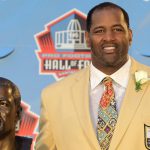 Will the NFLPA’s grievance impact current painkiller litigation against the NFL?

May 10, 2017
Sheilla Dingus
@SheillaDingus Richard Dent is a Hall of Fame defensive end, and MVP of Super Bowl XX, but now his opponent is the league for which he once played – and it may prove to be his fiercest opponent of all.  In May 2014 …