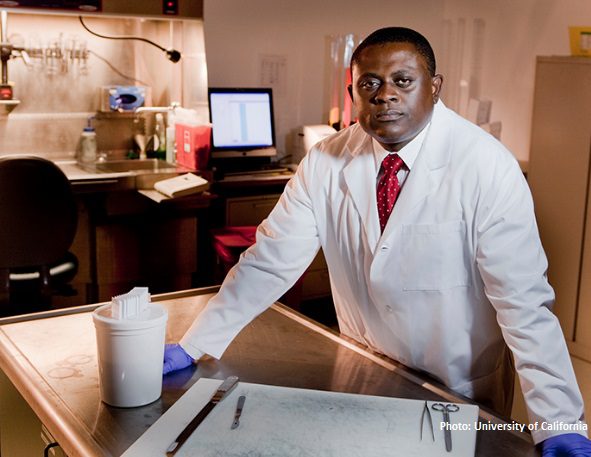 “They deny the truth and humanity of science in order to protect their revenue streams.”

On Wednesday as Judge Anita Brody held a conference detailing registration and award information regarding the well publicized NFL concussion settlement, renowned neuropathologist and researcher Dr. Bennet Omalu, submitted a sixteen-page letter defending the integrity of his research in a similar, but somewhat lesser known suit against the NHL.

Dr. Omalu is best known for his research on CTE, regarding Mike Webster, the first NFL player to be posthumously diagnosed with the disease.  Omalu’s findings were first published in the medical journal, Neurosurgery in 2005.  The resistance he faced from the NFL as his research increased and passed the scrutiny of peer review is chronicled in the movie, “Concussion.”

Like the NFL, the NHL has faced increasing lawsuits claiming that the hockey league enables a culture of violence that knowingly puts players at risk from brain trauma in order to maximize profits at players’ expense.  In August 2014 these lawsuits were combined into a multidistrict litigation (MDL) in Minnesota District Court.  The NHL, through Commissioner Gary Bettman has consistently and repetitively denied a link between concussions and sub-concussive brain injury and CTE.  In contrast to public statements, the NHL has taken a tough stance this season on pulling players from the ice when they are suspected of having a concussion through their new concussion spotter policy.  Apparently this has been implemented to minimize legal liability since the league’s official line still maintains that the players aren’t in any danger.

In their latest attempt to squelch the lawsuit, the NHL has hired a medical “expert,” Dr. Rudolph J. Castellani to represent their interest.  According to Castellani, the images of the brain tissue samples published in Omalu’s research do not show signs of the condition, and that the slides detailing Mike Webster’s brain did “not remotely qualify for any neurodegenerative process and was well within the range of normal for a 50-year-old man.  As such, there was no evidence whatsoever that the decedent described in this paper had a progressive neurodegenerative condition, and I disagree that the material provided by Omalu et al. in that paper permits the diagnosis of any neurodegenerative disease, including so-called ‘CTE.’” Castellani also found fault with research conducted by Boston University CTE Center, one of the nation’s largest and most prominent leaders in brain trauma research.

Based on Castellani’s statements, the NHL has filed a motion to compel Boston University CTE Center to release an enormous volume of documents and materials related to its research.  Castellani claims that publicly available materials are insufficient.  “If I had access to copies of gross pathology photographs, all brain slides, and clinical data, I could verify the accuracy of the reports, evaluate for other pathological processes that may be significant, and conduct a full, independent neuropathological analysis of the cases reported by researchers at the BU CTE Center,” Castellani claimed.

The NHL issued subpoenas to Drs. Ann McKee and Robert Stern, BU’s leading CTE researchers however, the doctors refuse to comply unless they receive signed medical releases, citing ethics and privacy responsibilities.  Dr. McKee also expressed grave concern for the sheer amount of work it would take to comply with the NHL’s discovery demand.  “The NHL subpoena’s invasive demand for all CTE-related pre-publication discussions, including with peer reviewers retained by journals, threatens the foundation on which science thrives,” Dr. McKee wrote, according to TSN.

“Dr. McKee also criticized the NHL’s offer to pay for a third party to comb through Boston University’s records and remove any patient identifying information before using the records in the litigation.

Dr. McKee said the school’s brain bank contains about 172,000 photographs from 400 donor brains (donors have included military veterans and former professional and amateur athletes). To eliminate the identifying autopsy number included on every photograph – assuming six photographs were processed each hour – could take one employee as long as 13 years, she wrote.”

“In practical terms it would shut down my research,” she said.

“The Boston University issue is between BU and NHL.” Plaintiffs’ counsel Charles Zimmerman said to Law360, “but clearly our view is the motion by the NHL is a vast overreach and an attempt to inhibit and chill valid and important research on the important topic of what happens to the brain during contact sports, at one of the foremost centers for the study of brain disease in the world.”

Concerned in regard to what is taking place, Dr. Omalu wrote a letter to Plaintiffs’ counsel which has now been submitted to the Court.  In the letter, Dr. Omalu begins by stating his background and qualifications, and then describes how his work over the last several years has passed the most stringent levels of peer review.

Dr. Omalu, who is no stranger to league opposition detailed how science from the 1700’s forward began to recognize the “emerging evidence that high-contact sports like boxing can cause brain damage in human beings.”  In his letter he summarized the school of scientific thought and research from this time going forward. 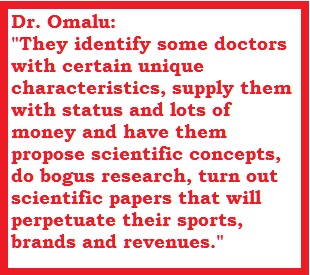 “In spite of this long history of very well-established science and common knowledge, sports organizations and leagues that govern high-impact, high-contact sports in the United States like boxing, American football and ice hockey have historically misappropriated, denied, undermined and dismissed this science in order to protect and expand their brand equity, financial health and market share. In other words, they deny the truth and humanity of science in order to protect their revenue streams.  Based on historical precedence. . . sports organizations may actually go even farther to influence science and steer the direction of outcomes of scientific research to their benefit. They identify some doctors with certain unique characteristics, supply them with status and lots of money and have them propose scientific concepts, do bogus research, turn out scientific papers that will perpetuate their sports, brands and revenues.”

Dr. Omalu sees a familiar pattern in how the NHL’s hiring of Castellani mimics what he’s seen from the NFL and Boxing Commission:

“The historical positioning of these organizations is to retain doctors like Dr. Rudy Castellani who use the privileges of their licensure and certification to make calculated attempts to deny the generally accepted principles of science and medicine, denying that common humanity we all share together through science. These doctors are usually doctors of meagre repute with very marginal and outlying opinions and interpretations of science that are grossly outside the widely and generally accepted principles and standards of science and medicine. They propose “alternative facts”. . . and use the prominent platforms of these extremely rich and famous sports leagues to propagate their “alternative facts’ and falsehoods. Historically they eventually fail, but after inflicting irreparable harm because the health and safety of the public is undermined.”

Omalu explained the lengthy, detailed and independent process of scientific peer review which his work has withstood.  Omalu said that Castellani is entitled to a “personal opinion,” comparing it to the marginal physicians who dispute the necessity of vaccines despite overwhelming scientific evidence, but emphasized, his personal opinion “does not change the generally accepted principles of science and medicine.”  He added, “Dr. Castellani, the last time I checked, is not a leader of thought in any field of science or medicine.”

Unlike the “alternate facts” claims of the NFL and NHL doctors, Dr. Omalu has submitted numerous papers pointing to the same conclusion as his initial paper on Mike Webster.  Thousands of research papers have been submitted since from major researchers and universities including BU, and they have independently reproduced and validated Dr. Omalu’s work.  “It is troubling and professionally negligent that a single physician, Dr. Rudy Castellani, an expert of the NHL, an interested party in the scientific outcomes of CTE, would single-handedly challenge the communities and colleges of scientists and physicians across the world,” Dr. Omalu wrote in his letter.  “He is positing that as an expert of the NHL, only he knows it best. . .  This is a very dangerous approach that undermines the primal foundations of science and medicine.”

“As a licensed physician and scientist, I will oppose, in the strongest terms possible, Dr. Castellani’s attempt, on behalf of the NHL, to compromise the integrity of the independent standards of practice of science and the scientific process,” Dr. Omalu exhorted. “These standards should in no way be steered by interested parties and industries like a powerful sports league.”

For better or worse, Dr. Omalu’s been here before.  He sees the light at the end of the tunnel.  “History, in its own generous way, takes care of the opinions and practices of doctors like Dr. Rudy Castellani of the NHL, Dr Elliot Pellman, Dr. Ira Casson and Dr. David Viano of the NFL,” Dr. Omalu stated.  He detailed and chronicled the “work” of these doctors and how it has been invalidated as well as that of the “experts” who represented boxing.

While the NFL’s stance on CTE has been shameful and referred to as the “League of Denial,” the NHL has become a “league of denial” squared.  Commissioner Bettman continues to tout the company line, “…to this day…no medical scientific study has ever concluded that concussions suffered by players who have played hockey at the NHL level can or do cause degenerative ‘brain diseases.”  Fortunately for the players, he’s on the wrong side of science.

How long it will take for this case to wind through the legal system is anyone’s guess.  Will the NHL wind up settling as the NFL did, without an admission of liability, and then later portray the settlement as an act of generosity they’re “proud of,” as NFL counsel Brad Karp said yesterday at Judge Brody’s concussion settlement conference?  Perhaps, but it seems this case has gone deeper into discovery than the NFL was willing to risk.  More and more judges are acknowledging the science behind CTE and are looking at the latency of the disease in regard to statute of limitations.  Litigation is a battle of attrition, but it would seem that at some undetermined point fairness and science will at last be validated.  One would at least hope for this outcome.  In the meantime, players wait; many will suffer, and some will die.

Permanent link to this article: https://advocacyforfairnessinsports.org/archive/nhl-concussion-injury-litigation/cte-expert-dr-bennet-omalu-challenges-nhls-alternative-facts/