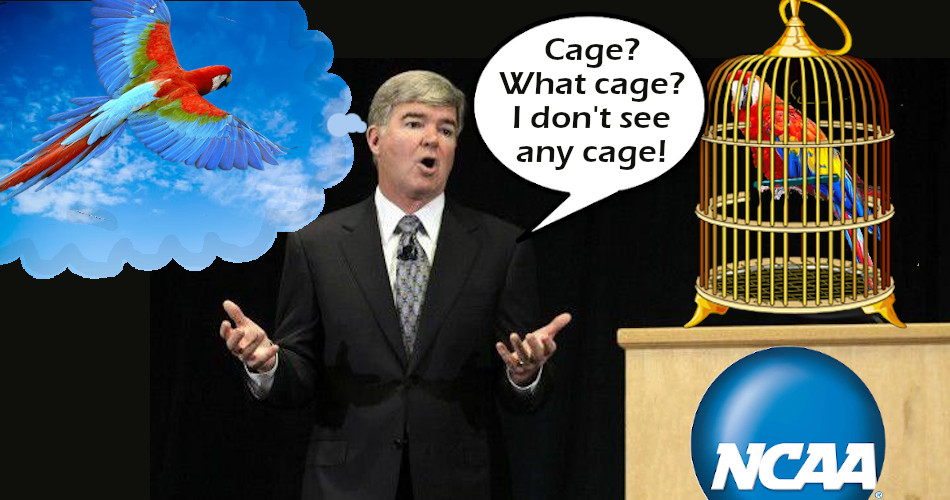 The best way to characterize the statements made by both sides is by introducing an episode of the animated video series Red vs. Blue. The Rooster Teeth Studios production was a parody of the popular video game Halo. In the series’ 31st episode, named “Room for Rent,” the audience sees how reality and one character’s perception of reality vary greatly.

The plotline of the episode centers on two of the characters (Church and Tex) entering the mind of another named Caboose. Caboose had established a reputation for being one of the dimmest characters in the cast intellectually speaking. Inside his mind, the other two characters found altered versions of other cast members and as the episode’s name suggests, plenty of open space.

In a similar way, the NCAA’s continued defense of its illegal and immoral activities can only be understood if you approach its “reasoning” in an altered state of mind. Reading the 17 pages of the NCAA’s response to the court’s call is like taking on the role of Church and Tex in “Room For Rent.” Everything is off and nothing makes sense.

To support its first argument, the NCAA states that the California law narrowly applies to compensation for the use of athletes’ images, likenesses and names. Alston, on the other hand, puts in jeopardy all compensation restrictions currently encoded in NCAA by-laws. The NCAA goes on to say that the law is not set to take effect for almost three years yet and that Alston will likely conclude by then.

In terms of supporting its statement that California may never actually be able to enforce its statute, the NCAA calls the law unconstitutional. The defendants cite Miller v. NCAA in that argument, which is undoubtedly the precedent that the same organization would use to try to nullify any law that tries to legislate any of its conduct out of any state. Yet, the NCAA states, such litigation may not prove necessary because the state may alter the language of the law.

The NCAA quotes the law’s preamble, arguing that California is monitoring the NCAA’s activity on the issue. Using that language, the NCAA suggests that California may either significantly alter or wholly repeal the law before it takes effect. Because of that, the 9th must consider it immaterial to Alston. That leads to the NCAA’s second argument regarding its working group on NIL policy.

It is here that the NCAA’s rantings grow most nonsensical and self-serving. The NCAA says that it is drafting rules to “account for recent technological and other developments and that college sports retains its amateur character.” In the same paragraph, the brief says “that complexity confirms that the NCAA and its members, not federal courts, are the proper entities to evaluate and decide on any possible revisions to the NCAA’s rules.”

These words replace reality with a lot of empty space. The NCAA and its members have had half of a century to “modernize amateurism” and have taken zero action to do so besides those which courts have forced it to take. The “other developments” the brief refers to is likely the shift in United States’ society’s view of the NCAA, which its own internal report laments is increasingly negative. That college sports have an “amateur character” is the most ludicrous statement of the bunch.

The only people who aren’t compensated directly and equitably for their work in college athletics are the athletes, and that only because of the very illegal constraints that Alston seeks the court to enjoin the NCAA and its members from keeping in place any longer. College sports are professional in character, as evidenced by the fact that the NCAA and its members effectively require athletes to sign non-compete agreements among other ways that they treat athletes as employees when convenient.

While it might be convenient for the NCAA and its members to be the only parties that can make rules for themselves, that doesn’t make it true. Like any other organization, the NCAA and its members are subject to federal and state laws. The fact that such authorities have allowed the NCAA and its members to skate by with its exploitative practices for decades does not mean that judicial and legislative bodies have no place in reversing that course now. In this statement, the NCAA is the cause of its own frustration. Had it been more proactive to modify by-laws to recognize athletes as the employees that they are and negotiate a collective bargaining agreement with them, the litigation it finds itself in would be unnecessary. Additionally, the negative press it decries would never have been brought against it. It is the greed of the NCAA and its members, not Alston or any of the other plaintiffs, that have brought it before the 9th in this matter.

The plaintiffs’ filing in response to the court’s demand is like exiting Caboose’s mind and coming back to reality. The brief makes three arguments.

First off, the plaintiffs state that California’s law and the formation of the NCAA’s working group on legislative issues is proof that Judge Claudia Wilken was correct in her ruling that consumers don’t support the NCAA’s illegal compensation restraints. Secondly, the work to possibly modify by-laws to allow athletes to benefit from the use of their NILs is proof that plaintiffs’ claims aren’t barred by the 9th’s ruling in O’Bannon v. NCAA. Finally, the plaintiffs argue the NCAA’s possible alteration of by-laws on this matter proves how it’s necessary for the 9th to expand on Wilken’s ruling in their favor.

Reading the plaintiffs’ arguments reveals one significant flaw. The plaintiffs act as if the NCAA has already modified its by-laws to allow athletes to receive compensation in exchange for the use of their NILs. That’s demonstrably false and may never happen. To date, very little has actually taken place on that matter as far as NCAA activity goes. Last October, the NCAA’s Board of Governors voted to accept a recommendation that each division of the NCAA form its own working group to investigate how such by-laws might be changed and make recommendations upon those findings. While some insight from the NCAA on how that process is going is expected in April, any votes on such changes would not take place until Jan. 2021 at the earliest. Until such votes take place, if they ever do, the same by-laws that the plaintiffs are asking the court to invalidate remain in place.

Other than that, the plaintiffs’ arguments are sound. Wilken was correct in her decision that consumers do not support the illegal constraints levied by the NCAA and its members. The NCAA’s own internal report demonstrates that the NCAA itself doesn’t even really believe the weak argument that removing the restraints would harm consumer interest. The fact that California passed its law with such broad and non-partisan support is further evidence of that.

To support their argument that their claims are not preempted by the 9th’s ruling in O’Bannon, plaintiffs refer to Wilken’s ruling which is in keeping with the theme of the NCAA’s nonsensical worldview. Wilken found that the defendants “do not follow any coherent definition of amateurism.” The plaintiffs are somewhat in alignment with the NCAA’s argument that Alston is about much more than NIL compensation but frame the NCAA’s movement on that issue in response to California’s legislation as proof that there are larger issues at play.

The plaintiffs conclude their brief by giving an account of every instance in which individuals and institutions have challenged NCAA by-laws on antitrust grounds and prevailed. The “doom and gloom” that the NCAA predicted would follow each change has been found fictitious, as demand for college athletics has never been higher. Yet this is the first such case that could give athletes the same relief that has been granted to athletic departments and coaches by courts in the past.

How much these briefs may influence the court, if at all, remains to be seen. If the 9th upholds Wilken’s ruling, remands it back to her with instructions or strikes it down also is yet to be determined. What’s clear once again in these briefs is how the NCAA’s only hope is to convince the court to enter its deranged mind. If the justices remain tethered firmly to reality, they must find for the plaintiffs.

Permanent link to this article: https://advocacyforfairnessinsports.org/archive/past-ncaa-cases/alston-v-ncaa/the-ncaas-latest-filing-in-alston-continues-its-nonsensical-campaign/