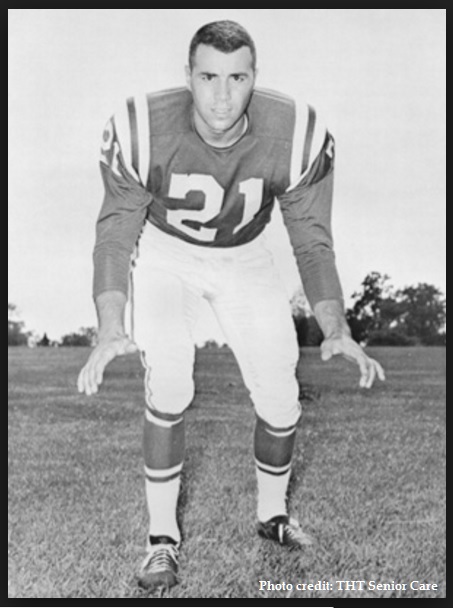 In November 2015 a wrongful death law suit was filed against the NFL by Arthur DeCarlo Jr., son of Arthur “Art” DeCarlo Sr., who was a defensive back in the NFL from 1953 through 1960.  Drafted by the Chicago Bears in 1953, DeCarlo Sr. was quickly traded to the Pittsburgh Steelers where he played for a year prior to enlistment in the Army.  While still in the Army, his contract was traded to the Washington Redskins.  Afterward, he finished his NFL career playing for the Baltimore Colts from 1957 – 1960. “DeCarlo was exposed to numerous concussive and sub-concussive blows throughout his NFL career, [including] . . . loss-of-consciousness concussions where DeCarlo was subsequently returned to game play within the same game, within several plays of having been rendered unconscious,” states DeCarlo Jr., in the lawsuit.

The lawsuit claims that DeCarlo’s death on December 21, 2013 was caused by Chronic Traumatic Encephalopathy (CTE) and that information concealed and/or withheld by the NFL contributed to his death.  “Beginning in the 1920s, evidence linked repetitive head-trauma to the unrecognized symptoms experienced by DeCarlo and to CTE, the neurological illness that claimed his life.”  The suit alleges that “the NFL had constructive and actual knowledge” of the dangers of repetitive head trauma yet failed to inform the players of the dangers.

Numerous studies, beginning with one published in the Journal of the American Medical Association in 1928 are cited in the lawsuit to support the claims.  At the time, what is now known as CTE was then referenced as “dementia puglistica.”  Especially noteworthy is the fact that the NCAA acknowledged the dangers of concussions as far back as 1933.

“As a direct and/or proximate result of this failure to warn, and also as a direct and/or proximate result of the later subsequent failure to alert Art DeCarlo to the risks and warning-signs of devastating latent injuries from repetitive head trauma, DeCarlo and his family were unaware of the cause, extent, and true nature of his devastating injuries and lacked the ability to mitigate his pain and suffering prior to death. And as a direct/proximate result of this failure to warn, Art DeCarlo ultimately suffered death,” says DeCarlo Jr. The lawsuit also accuses the NFL of investing in “self-serving research about a problem the NFL knew was on its horizon before victims like . . . DeCarlo did,” and as such attempted to suppress and withhold knowledge from former players such as DeCarlo regarding the latent effects of the brain injuries they sustained while playing professional football.

Because of the purposeful concealment of the latent dangers posed to former players’ as a result of the mild traumatic brain injuries, the lawsuit asserts that players such as DeCarlo didn’t seek proper medical attention when their symptoms first began to surface which caused increased suffering, and possibly contributed to premature death.

In numerous lawsuits the NFL has relied on its collective bargaining agreement with the Players’ Association, which has always disproportionately favored the management side of the equation in order to evade legal arguments against it.  But – as this lawsuit points out – the first CBA was negotiated in 1968 – eight years after Art DeCarlo retired from professional football, therefore, negotiations that ensued after his retirement should have no relevance to this case.

Another legal tactic the NFL has relied upon in concussion, and other liability suits is that of affirmative defense, where certain allegations are acknowledged but another set of facts, typically legal technicalities, are used to mitigate and defend against claims of otherwise unlawful conduct.  One affirmative defense that has been used successfully many times is that of  statute of limitations.

A recent court ruling indicates that the NFL may have, in a manner of speaking, reached it’s own “statue of limitations.”  In the Supreme Court of the State of New York, Judge Manuel J. Mendez declared on Friday, that he rejects the NFL’s argument regarding statute of limitations beginning with the initial injury sustained by a player.  Noted sports law, gaming and appellate attorney Daniel Wallach first broke the news on Twitter:

NY court says ex-NFL player’s #CTE claims are not time-barred because disease is not discoverable until autopsy: pic.twitter.com/XkNb8J2X7Z

I asked Wallach for his insights on this important development.  “This is a significant ruling which could impact the other concussion ‘opt-out’ cases,” he said.   “In many of the other concussion cases, the NFL will be arguing that the players’ claims are time-barred because they waited too long to file lawsuits. Under the NFL’s theory, the statute of limitations on any claim begins to run from the time the players sustained their initial concussions, which in virtually all of these cases, was many, many years ago. The DeCarlo court rejected this argument, and, instead, applied the ‘delayed discovery’ doctrine to CTE cases, analogizing the condition to asbestos, where the injuries lie latent for many years and, in the case of CTE, is not discoverable until a post-mortem autopsy.  Thus, on any CTE-based claim, a cause of action for statute of limitation purposes begins to ‘accrue’ no earlier than the player’s death, and, in most cases, no sooner than the autopsy result.”

He explains the broad application of this ruling in regard to the 57 federal concussion opt-out lawsuits which are now pending:  “This decision represents the first significant setback for the NFL in any of these concussion cases, and could be persuasive authority in the other lawsuits.  If this decision is followed by Judge Brody in the other opt-out cases, the statute of limitations falls away as an affirmative defense for the NFL in cases involving CTE,” Wallach said.  “This is now the fourth case overall in the CTE context—with the other lawsuits involving the NHL, NCAA and UFC—where a court applied the ‘delayed discovery’ doctrine to CTE.”

In the large class-action concussion settlement, which was approved by Judge Anita Brody last year, in settling, the NFL was neither forced to undergo extensive discovery nor admit liability for injuries to former players that were induced by concussive and sub-concussive head injuries.  A group of former players objected to this settlement and sought to have their case heard in the Supreme Court of the United States because they felt the settlement did not go far enough in acknowledgment of CTE among other issues.  Some players opted out completely.  In December, the High Court declined certiorari review, and as such, these cases that were shelved awaiting the Supreme Court’s decision are now proceeding in addition to a related lawsuit brought by the NFL’s insurers as well as state court cases such as DeCarlo.

In light of Wallach’s insights, it appears that should this precedent hold – which seems likely in view of recent applications of the “delayed discovery” doctrine – then it is probable that the NFL will either finally have to submit to discovery or settle in a much higher monetary capacity than we’ve seen in the past.

UPDATE: This case reached settlement on March 16, 2018 for an undisclosed sum.