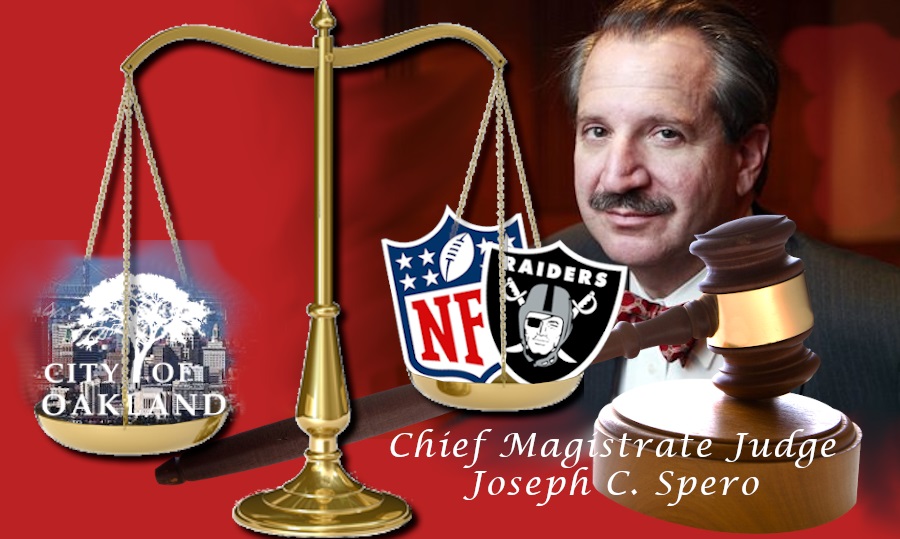 On Friday the NFL, and Mark Davis, led Raiders responded to the City of Oakland’s recent brief, hoping to put a quick end to their lawsuit seeking damages for the Raiders’ relocation to Las Vegas.

NFL Reply Brief in Support of Motion to Dismiss

A quick view of the contents reveals that the NFL is still pursuing the same arguments as before the response from the City was filed, namely, “Oakland Lacks Standing To Sue Under The Antitrust Laws,” “Oakland Has Not Alleged Injury,”, “Oakland’s Claims Fail As A Substantive Matter,” and in all caps, “THE CITY OF OAKLAND FAILS TO STATE A CONTRACT CLAIM.”  Let’s take a look at their arguments and see how the reply of the white-shoe firms of Arnold & Porter and Covington & Burling representing the NFL stack against the City of Oakland’s brief, authored by famed litigator Jim Quinn.

The NFL’s brief begins with the following introduction: 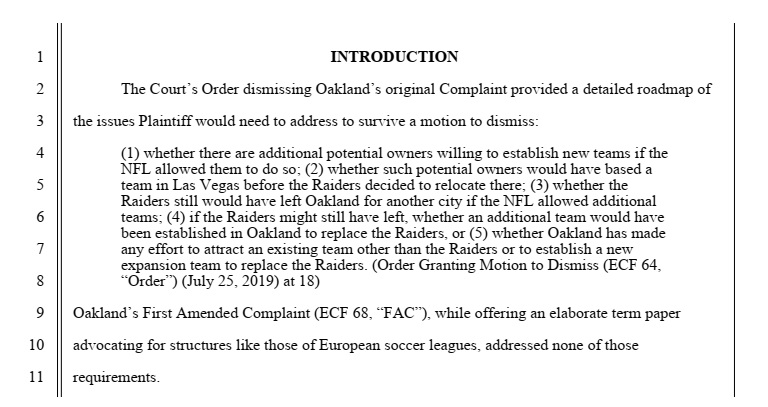 The indented portion quotes from Judge Spero’s order asserting that Oakland “has not alleged injury-in-fact.”  In addition, Judge Spero opined:

“[I]t is not material whether Oakland captions its claims as based on theories of “boycott” or “price fixing.” Regardless of such labels, Oakland must “demonstrate that a particular contract or combination is in fact unreasonable and anticompetitive…In other words, it is not enough that a plaintiff has been injured; the plaintiff also “must have ‘antitrust standing.’” Id. That question turns on the following factors: “(1) the nature of the plaintiff’s alleged injury; that is, whether it was the type the antitrust laws were intended to forestall; (2) the directness of the injury; (3) the speculative measure of the harm; (4) the risk of duplicative recovery; and (5) the complexity in apportioning damages.”

In his analysis dismissing the original complaint with leave to amend, Spero deferred to the “Rule of Reason,” that has proved to be a formidable challenge to plaintiffs challenging sports organizations.

“Where some “‘restraints on competition are essential if the product is to be available at all,’” however—as in the case of professional sports leagues—“per se rules of illegality are inapplicable, and instead the restraint must be judged according to the flexible Rule of Reason.”

The NFL brief doubles down that Oakland has still failed to meet the threshold.

To best analyze the arguments, let’s take a look at the major points made by each party, noting that Judge Spero’s position was based on the original and not the amended complaint.

The NFL never concedes an easy win and often seeks to deflect away from legitimate arguments as it does here.  Oakland’s First Amended Complaint (FAC) goes into extensive detail as to how the NFL’s revenue-sharing works to create a cartel and restrain trade.  It also elaborates on Oakland’s fruitless attempts to retain the Raiders and demonstrates this is due to the closed nature of the NFL, compared with European soccer leagues, and how it makes obtaining another NFL team a virtual impossibility.

Oakland also cites binding Ninth Circuit precedent in Raiders I which should carry weight with Judge Spero or failing that, on an appeal to the Ninth Circuit.  Unfortunately, sports leagues and associations have been subject to the “Rule of Reason” as noted by Judge Spero, and this has at times allowed anti-competitive behavior to continue with more leniency toward sports organizations than other industries enjoy.  “The Rule of Reason” is also responsible for the plaintiffs’  limited wins against the NCAA in O’Bannon and Alston.

In Alston and O’Bannon, the NCAA claimed its anticompetitive behavior was due to the unique nature of the “collegiate model” and that its style of amateurism separated it from professional sports and was essential to its continued popularity.  While I personally believe the NCAA’s argument is contrived and completely false, courts, including the Ninth Circuit have given deference to the “amateur model,” and as such have made only minor adjustments while conceding that their model clearly is in opposition to anti-trust law.

The NFL makes no such argument nor does it present any pretense justifying its anti-competitive behavior outside of profit, and the assertion that they are entitled to make their own business decisions.

The NFL also claims that Oakland’s case law is invalid because the plaintiffs in the cited cases “identified specific competitors that had been foreclosed from the market by the defendant’ conduct,” implying that Oakland did not.

To the contrary, Oakland cites a very recent example of another city foreclosed from the market in St. Louis, stating it its reply brief, “the Missouri court overseeing the action by the City of St. Louis against Defendants for the relocation of the Rams has rejected the very same Relocation Policy arguments made by Defendants here using the same pleading standard.”  Furthermore, Oakland argues:

I tend to agree with Oakland’s assessment, and it appears based on the current status of proceedings in St. Louis that should Spero dismiss on these grounds conflicting case law will emerge if upheld at the Ninth Circuit.  While it’s true that Oakland was unable to name a new team that sought to enter the market and was barred by the NFL, that seems to be a straw man argument.  One could plausibly argue that no new teams have formed and attempted to join the NFL due to its anticompetitive model and it’s generally understood that the enormous costs involved would end in a fruitless endeavor due to the NFL’s operating practices.  If Spero takes the plaintiffs’ pleadings as true as demanded in the pleading stage as long as a plausible argument is made, I believe Oakland’s arguments in this respect are strong enough to survive the current motion to dismiss.

There are other arguments that come into play and will factor into Judge Spero’s analysis in granting or denying the NFL’s motion to dismiss.  We’ll take a look at the questions, “Is Oakland a Proper Antitrust Plaintiff?” in Part 2 and “Did Oakland suffer a direct injury?” in Part 3.

Permanent link to this article: https://advocacyforfairnessinsports.org/archive/past-nfl-cases/city-of-oakland-v-raiders-nfl/raiders-nfl-respond-to-oakland-in-a-bid-to-dismiss-part-1/