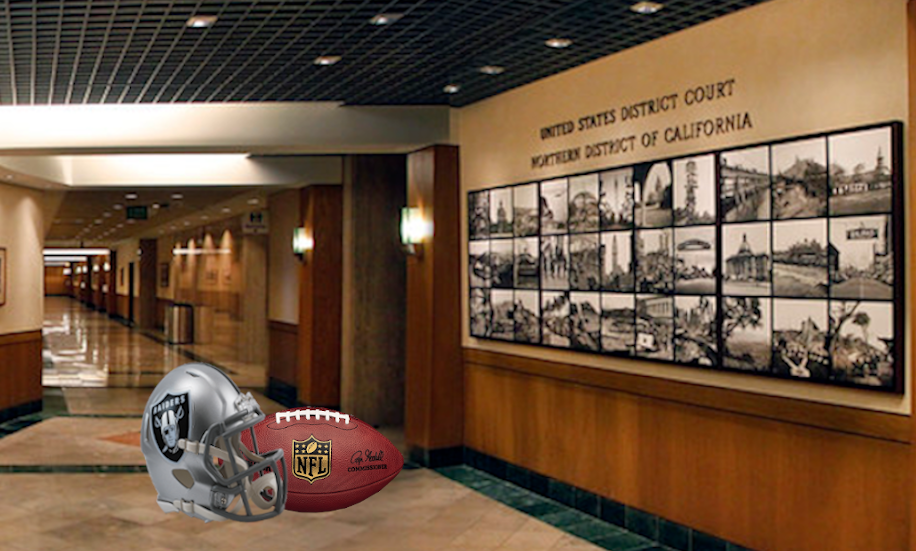 In Part 1 of our deep-dive on the Oakland lawsuit, we covered whether Oakland had properly alleged an antitrust claim and in Part 2, if Oakland was the proper plaintiff.  Without taking time to review, we’ll move ahead to the next argument presented by the NFL in their recent brief.

As noted in Part 2, “circuits have, for the most part, either limited standing to those “directly injured” or to those “in the target area” of the antitrust violation.See In re Multidistrict Vehicle Air Pollution Litigation M. D. L. No. 31, 481 F.2d 122, 126-28 (9th Cir.)  This means that the direct standing argument could have great impact on the case depending on how broad or narrow Judge Joseph C. Spero views the net.

NFL: Oakland Lacks Standing Because Any Injury Is Indirect. 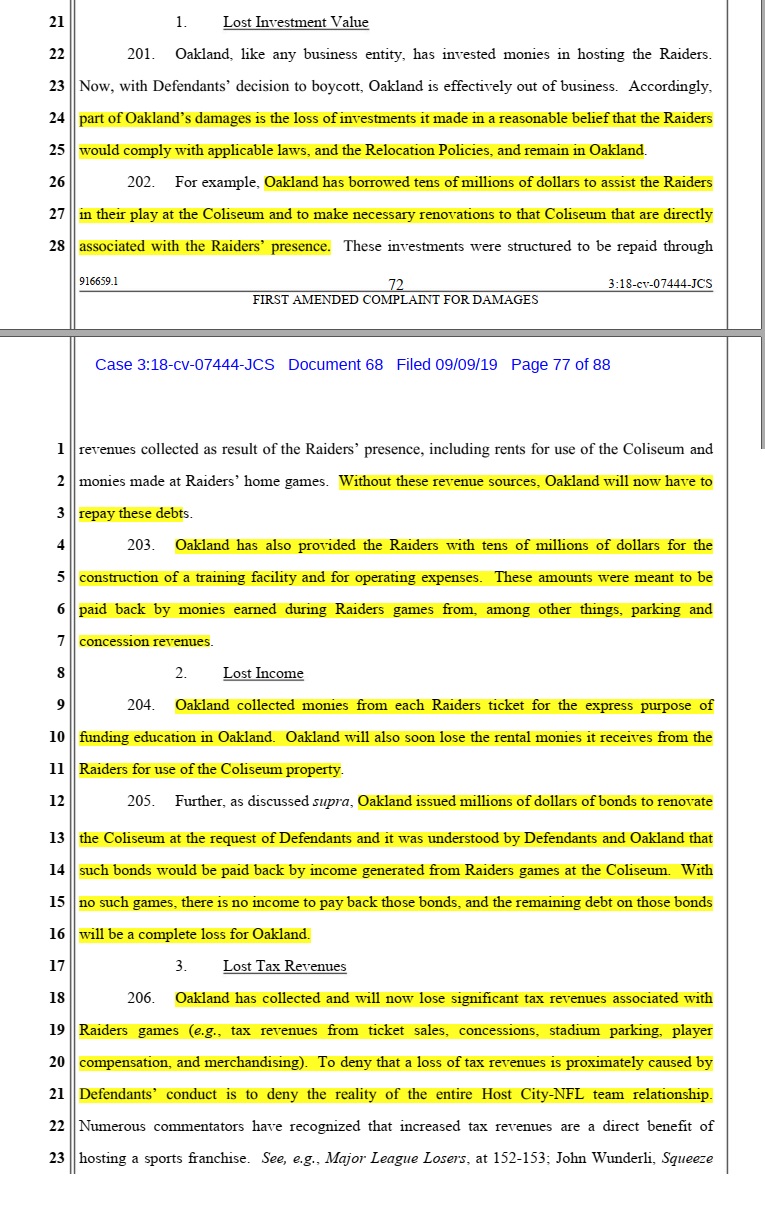 In Oakland’s First Amended Complaint (FAC), multiple damages are alleged, though rent was not among them.  It’s likely the NFL wanted to focus on rent because the Raiders were given free or sharply discounted rent with the City’s income flowing from other sources.

Judge Spero notes that lost rents may be recoverable but adds that Oakland has not alleged that loss, but rather the losses highlighted above.  In the FAC, Oakland notes that rents are among the revenue sources that Oakland has lost in order to obtain the funds to repay debt incurred to retain the Raiders.

Continuing with the arguments:

The NFL’s arguments as to the identity of the landlord seem to be a strawman.  Oakland states that it directly owns the coliseum jointly with Alameda County.  A property owner who utilizes the services of a leasing agent has not forfeited her property and is still very much the owner and true landlord, even if the tenant deals directly with the property owner’s agent, as is the case here.

While Judge Spero declined to rule on the “indirect relationship” he did not seem to view it as a major obstacle if Oakland can meet his bar in other areas of standing.

One of the stated obstacles Oakland must clear in order to meet Judge Spero’s bar is Hawaii v. Standard Oil Co. of California. 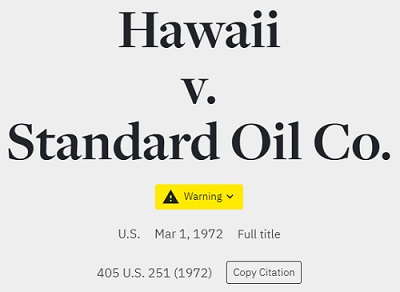 The first thing that caught my attention when I pulled Hawaii, was that a warning flag for citation was displayed.

The warning flag pointed to two contradictory opinions, one of which originated in the Ninth Circuit.  In California State Council v. Associated General, 648 F.2d 527, 538 (9th Cir. 1980).  In California, the Ninth Circuit held that “injury to the Unions’ business was more than merely a “foreseeable consequence” of the AGCC’s boycott of union-signatory subcontractors — it was the intended result.” and “Under the target area test then, the Unions’ complaint satisfies the legal causation requirement for standing.”

Oakland has asserted genuine monetary damages in loans that must be repaid without the benefit of the revenue they expected to receive, and had in the past, received from the Raiders.  Oakland would also appear to be “more than merely a foreseeable consequence,” but the intended target, as alleged.

Though lost tax revenues have been challenged by both the federal government in an interest brief, and the NFL, citing Hawaii as well as concerns by Judge Spero, Oakland differentiates their position from the one in the NFL’s chosen case law.

In Radovich v. Nat. Football League, 352 U.S. 445 (1957), the Supreme Court held that the NFL is subject to antitrust law and though it has found minor exemptions since that time, such as Brown v. Pro Football, Inc. 518 U.S. 231, 248 (1996) in which Justice Stephen Breyer wrote for the majority, “clubs that make up a professional sports league are not completely independent economic competitors, as they depend upon a degree of cooperation for economic survival,”  Radovich has generally withstood the NFL’s challenges.

Oakland has pleaded real damages and has challenged the interpretation of Hawaii, to demonstrate standing regarding lost taxes that are directly tied to the Raiders’ presence. They have argued that there are no overlapping claims, because the tax revenue they seek is derived from the revenue generated by the Raiders and should a business seek to sue for damages, the money sought by Oakland would not be recoverable by that business, nor does Oakland seek to recover damages incurred by that business.

If not for Judge Spero’s interpretation of Hawaii when dismissing the original complaint, and the government’s brief alluding to the same, I’d think the issue would be a near slam-dunk for Oakland.  It remains to be seen if Spero will revise his considerations based on Oakland’s arguments, but I believe that regardless, Oakland’s other damage claims will survive the motion to dismiss.

In Part 1 we covered the question of whether Oakland fails to state an antitrust claim.  In Part 2 we looked at the question, “Is Oakland a proper plaintiff?”  Read on for an analysis of the arguments regarding the NFL’s relocation policy.

Permanent link to this article: https://advocacyforfairnessinsports.org/archive/past-nfl-cases/city-of-oakland-v-raiders-nfl/will-oakland-survive-the-nfls-motion-to-dismiss-part-3/