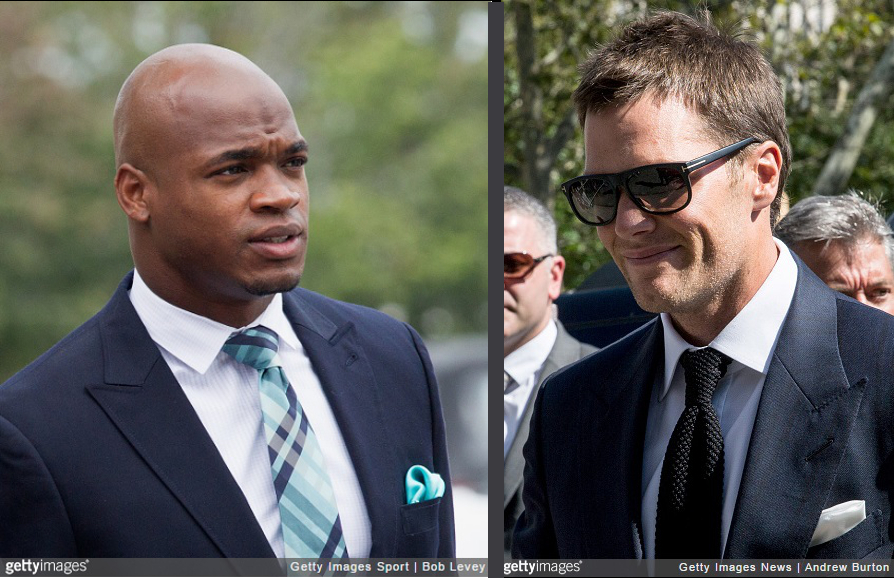 Long ago, in a galaxy far, far away, impartiality and fairness were considered an integral part of the judiciary. Perhaps this is still true in the criminal justice system, but apparently not so in the alternative universe of labor, collective bargaining and subsequent arbitrations.

Around 11:00 am Thursday morning noted sports, gaming, and appellate law attorney Daniel Wallach broke the news of the long awaited decision in the Adrian Peterson case on Twitter.

The Eighth Circuit decision did not bring the circuit split from the April 25 Second Circuit opinion in the Brady case that most following the two stories had been hoping for.  Instead, once again, this time in a unanimous opinion, the circuit court vacated a district court decision further strengthening the absolute authority of NFL Commissioner Roger Goodell, as defined by Article 46 of the collective bargaining agreement, and upholding precedents of arbitral deference.

There were significant differences in the Brady and Peterson cases; in the former there was no admission of guilt as well as evidence strongly pointing toward innocence.  In the Peterson case, a nolo contendere, or “no contest” plea was entered in misdemeanor judicial proceedings. Despite the surface contrasts, however, there were also striking similarities. The NFLPA argument in the Brady case placed emphasis on bringing additional charges (non-cooperation) against the defendant after the fact, whereas with Peterson, the focus was on how Goodell improperly and retroactively applied discipline under a personal conduct policy that was not in place at the time NFL appointed arbitrator Harold Henderson affirmed Goodell’s decision.

Here are a few key take-aways from the Eighth Circuit decision (these will sound eerily reflective of the earlier Second Circuit opinion):

1.  It is unnecessary for the court to disagree with the arbitrator’s decision unless it fails to draw its essence from the collective bargaining agreement. 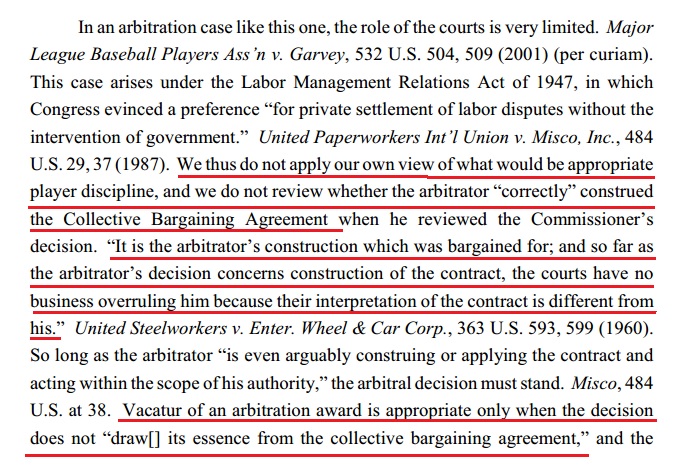 2.  Law of the shop is not violated so long as arbitral precedents are applied. Proper application is irrelevant.

3.  The language of a collective bargaining agreement supercedes bias or impartiality. In other words, if impartiality isn’t specifically bargained for, civilly applicable due process becomes irrelevant. 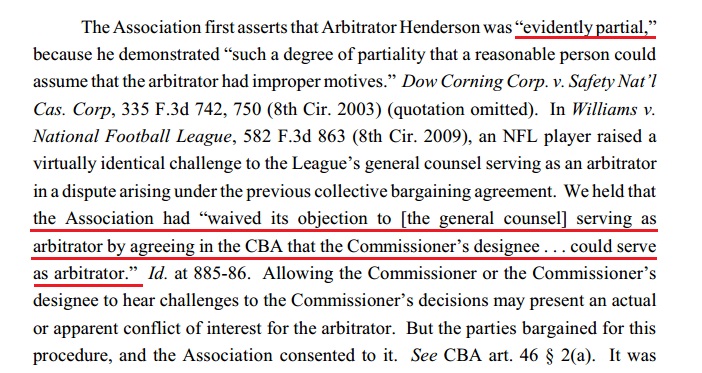 4.  Fundamental fairness is not the responsibility of the court under the Labor Management Relations Act or the Federal Arbitration Act. 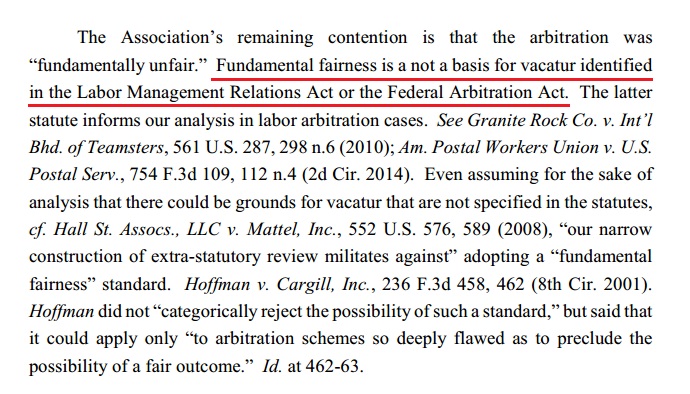 Shortly after the Eight Circuit decision was announced, the NFLPA released the following statement: 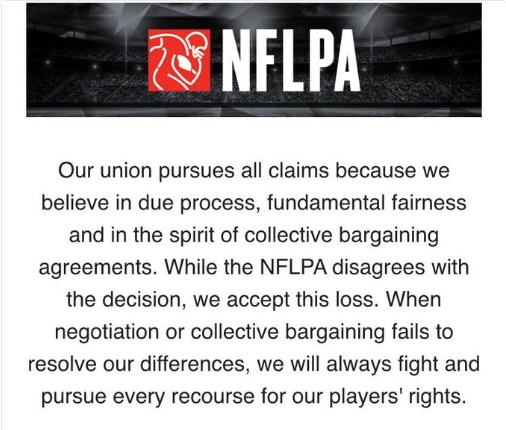 The court opinion coupled with the Player’s Association release sparked a great deal of debate within the Twitter legal community regarding whether or not the NFLPA will continue to pursue judicial action, with this case as well as the Brady case, and if so, what the options and strategy might be.

In order to sort out the complexities of this dilemma I called upon Daniel Wallach, who graciously agreed to discuss the issues with me and offered his insights into what’s coming next and what needs to take place.

He told me that he believes the NFLPA will continue to pursue both cases, in fact, he believes that they “must do so” in order to shield themselves from further regression.  For Brady, the next step is the Supreme Court; for Peterson, an en banc hearing will most probably be petitioned.  Wallach emphasized that these cases go far beyond individual players and will “impact every subsequent CBA” should the current precedents be permitted to stand.  He also noted that cases such as Brady and Peterson come “once in a decade” and that the NFLPA cannot allow this opportunity to pass without pursing every possible avenue for judicial intervention.  “If they don’t they may not have another opportunity for ten or more years,” he stressed.

Wallach stated that “the U.S. Constitution has an ex post facto clause, but the CBA apparently does not.”  To simplify, this means that a law or interpretation thereof is applied retroactively, and makes illegal an act that was legal when committed, increases the penalties for an infraction after it has been committed, or changes the rules of evidence to make conviction easier.  In both the Brady and Peterson cases, this has been a major focus.  In both instances, the district courts observed this constitutional edict, whereas the circuit courts appear to have vacated the same in strict interpretation of the precise wording of the collective bargaining agreement coupled with a staunch refusal to overturn an arbitration award.  Abandonment of these safeguards boils down to “anything goes,” as Wallach said.

“Does the Players’ Association waive constitutional protections,” he questioned.  “What does it mean to be evidentially partial? Do you waive any and all claims to arbitrator bias simply by agreeing to a party-selected arbitrator in the CBA?  That’s an area in need of refinement,” Wallach stated.

Some of Thursday’s Twitter discussion centered on whether or not the Union intentionally forfeited these rights and protections through the CBA as the circuit judges contend.  Thomas A. Baker III, a law professor at the University of Georgia stated, “I hate defending this process, but I agree with CA2 and CA8. NFLPA let the players down.”  When I asked if he felt this was through intent or oversight he replied, “I think intent. NFLPA wanted other concessions. Don’t litigate for what you should negotiate.”  When I asked Wallach his opinion on the matter, he emphatically stated, “Not intentional,” explaining that no one would reasonably expect that a high profile discipline case would be handled in such a “dictatorial” manner.  He went further to explain that players have little control in this process.  “They don’t have much of a choice if they want to play in the NFL.”  He reasoned that unlike workers in many other professions, professional football players don’t have a choice of employers, nor do they have the luxury of being able to opt out of a union agreement.  If they want to play, “they take what was given to them,” he said.  Many other respected legal scholars offered similar opinions throughout Thursday’s Twitter discussion.

The issues arising from Article 46, including the commissioner’s definition of “conduct detrimental” and his ability to preside over player conduct arbitrations weren’t a topic of contention when the CBA was adopted at the beginning of Goodell’s tenure.  Now they are.  Article 46 has been a part of the CBA since it’s inception in 1968, and had worked with prior commissioners because they respected the unspoken limitations inferred.  The NFLPA didn’t try to fix it because it hadn’t become blatantly apparent that it was broken.  That’s certainly not the case now, but the remedies seem vague, given the deference of the Circuit courts to strict interpretation of the CBA and affirmation of the broad authority granted to the commissioner through the same.

I queried Wallach regarding the recourse he feels the NFLPA might have in order to remedy the situation and he emphatically emphasized the importance of the courts.  He pointed out the limited resources of the Players’ Association and how their bargaining leverage is far from equal with the NFL.  The biggest imbalance, he stated was that “the players on average have less than five years to establish themselves and earn substantial income through their time in professional football, whereas the owners are billionaires who can afford to hold out.”  While the players are “taking a real gamble” as he phrased it; NFL management is not.

Currently Federal courts are somewhat deadlocked in balance between pro-labor and pro-management leaning justices; this is especially true of the Supreme Court.  Wallach noted that it will be interesting to see how the judicial balance might change with the upcoming election.  The Obama presidency has afforded 8 years of liberal leaning judges, and should the tide continue in this direction he feels that the labor stance of the court system will be much stronger in 2021 than it was in 2011.  It will be riveting to see how this plays out.  A great deal is at stake here, not only for athletes but for organized labor as well. Imbalances and discrepancies in labor and non-labor arbitration rulings need clarification and synchronization.

The American judicial system was founded on the ideals of justice, fairness and integrity.  These principles must be preserved, and while current circuit court precedent appears swayed toward technicality, many within the legal profession, including district court judges Richard Berman and David Doty, and circuit court judge Robert Katzmann tend to place a high value on these inalienable rights.  To close his opinion of dissent, Judge Katzmann aptly wrote, “It is ironic that a process designed to ensure fairness to all players has been used unfairly against one player.”  When you broaden the scope of his statement and substitute “citizen” for “player,” it is easy to see why this issue should be of utmost importance to the Supreme Court.  One can only hope the justices agree.

Permanent link to this article: https://advocacyforfairnessinsports.org/archive/past-nfl-cases/deflategate-archive/impact/