Why Labor Unions Should Care About Deflategate 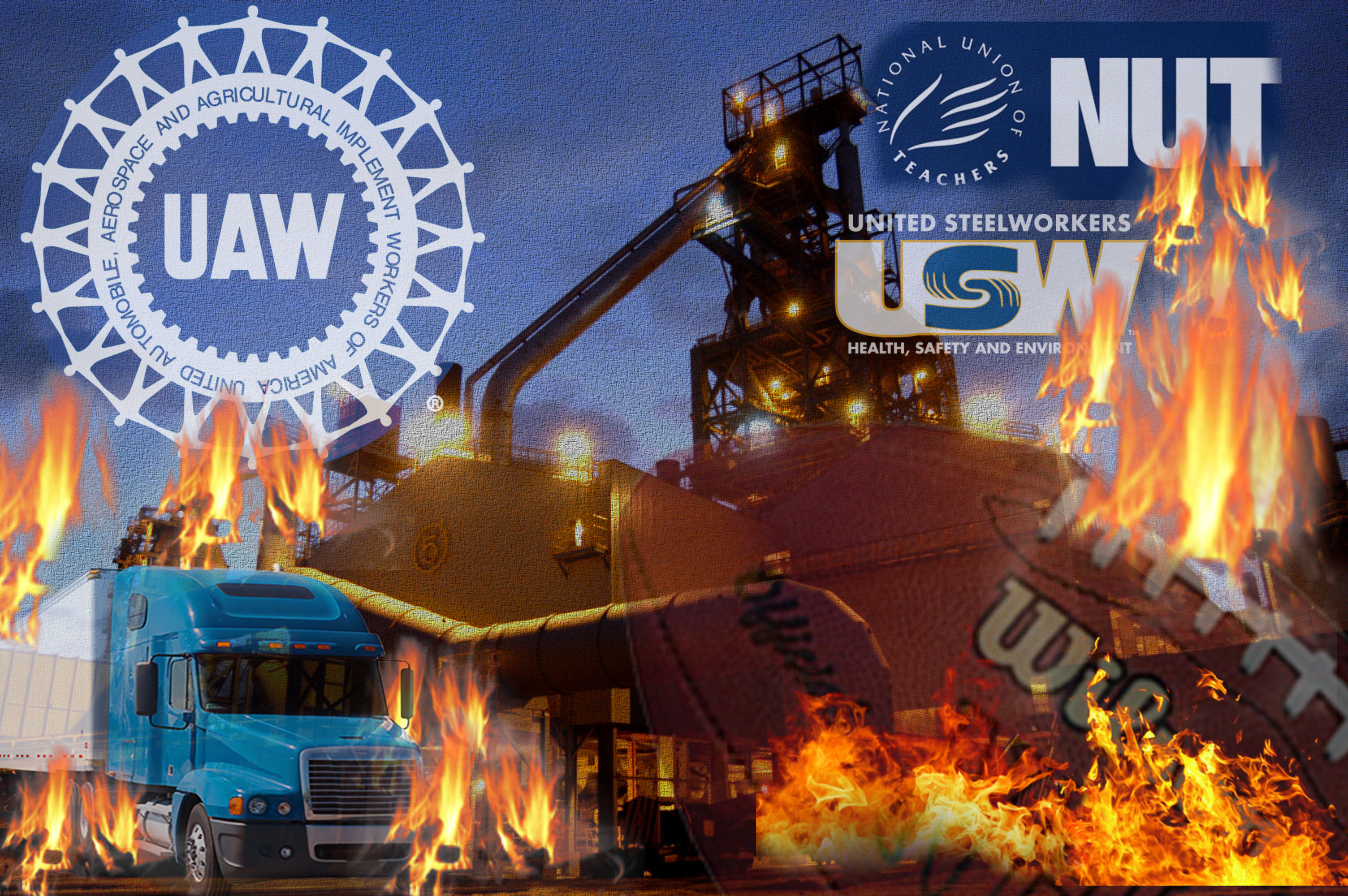 The Second Circuit Ruling Impacts Everyone

Deflategate is back in the news again!  Patriots fans, dismayed and disappointed by the April 25 split ruling by the U.S. Court of Appeals for the Second Circuit, are once again holding their breaths as they await a decision of the Second Circuit regarding whether an en banc (full panel) hearing will be granted to Tom Brady and the NFLPA.  Others moan for having to endure more Deflategate stories.

Regardless of whether or not you like the New England Patriots, or believe in the guilt or innocence of their famed quarterback, if you believe that justice and fairness should prevail, you should be hoping that this case beats the odds.

Less than 1 percent of the cases requesting en banc are actually granted a full panel hearing. To up the odds on this four amicus briefs from unlikely sources have been submitted to the Court to help tilt the balance..

The first brief, filed by 20 members of the scientific community demonstrates the science behind the accusations against Tom Brady.

The second, filed by the New England Patriots organization strongly supports Brady and references the bias and unfairness demonstrated on the part of the NFL throughout the debacle.  While on the surface it may appear to be a natural move on the part of the Patriots, it is anything but.  As a franchise owner, Robert Kraft is a part of NFL management, so in reality, the brief supports the argument against himself.  Due to provisions in the NFL Constitution Kraft and the New England Patriots could face some very steep legal fees for the submission of this brief.

Yesterday, at the buzzer deadline two additional amicus briefs from unlikely sources were filed.  The AFL/CIO, representing 12.2 million diverse union workers, sought to convince the court of the fundamental unfairness of process in the Brady case and how it can impact all people who rely on union representation.

The final brief filed came by way of legendary attorney Kenneth Feinberg, who has represented victims of numerous disasters, including 9/11 victims. His work has been primarily accomplished through mediation and arbitration with the objective of seeing victims of various disasters fairly compensated. In his strongly worded brief, he explains to the Court how the the ruling upholding the shoddy arbitration process of the NFL will impact future credibility of arbitration and damage many who seek justice through this path.

These briefs are of great importance.  While the Court is not obligated to weigh them in their decision making, it stands to reason that as the judges of the Second Circuit deliberate on whether or not a re-hearing is mandated they should go a long way toward convincing the panel that the criteria in accordance with the rules of Federal Appellate Procedure, Title VII, Rule 35 at least one the following criteria have been met:

(1) en banc consideration is necessary to secure or maintain uniformity of the court’s decisions; or

(2) the proceeding involves a question of exceptional importance.

It is my opinion that both criteria have been met and if left unchallenged the current Second Circuit decision could have an impact, not only in the world of sports, but in the world at large.

“This case arises from an arbitration ruling by NFL Commissioner Roger Goodell that undermines the rights and expectations of parties to collective bargaining agreements, and runs roughshod over the rule of law…When Brady exercised his right under the collective bargaining agreement to appeal the punishment, Goodell appointed himself as the arbitrator and “affirmed” the punishment he had himself imposed.”

“Goodell’s biased, agenda-driven, and self-approving ‘appeal’ ruling must be vacated.” (emphasis mine)

The arbitration system is in place to handle disputes between two parties without tying up the court system and it has long been the opinion of the court not to interfere with said arbitration unless exceptional circumstances dictate intervention.

In District Court, Judge Richard Berman vacated Brady’s suspension because he detected fundamental unfairness in the arbitration process administered by the NFL.  Second Circuit Chief Judge Robert Katzmann agreed in his opinion of dissent, but nonetheless, majority opinion prevailed setting a dangerous precedent for the workplace in general. Consider this excerpt from the Second Circuit majority opinion: 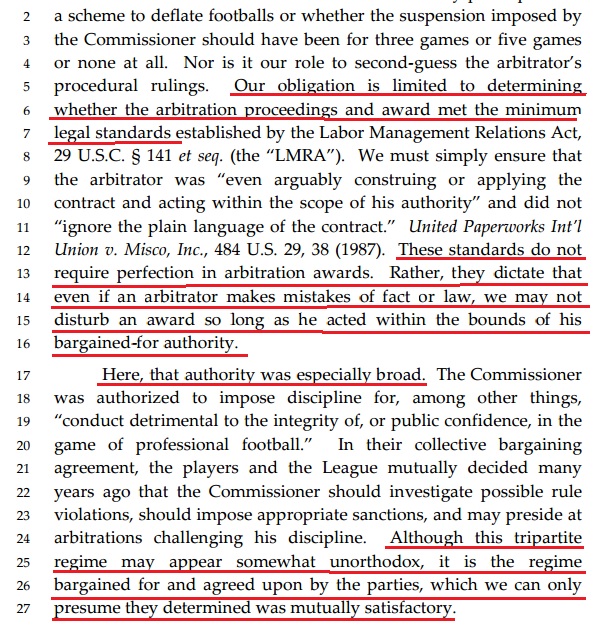 The language above should be disturbing to anyone who desires fundamental fairness in the workplace valued over loopholes in a CBA, union, or trade guild agreement with industry management.

Industry management, by its very nature, always has the upper hand in collective bargaining agreements.  Workers unions, although often viewed as powerful entities never have the financial resources or bargaining chips available to them that their counterparts do.  When considering points of leverage against employers, union represented employees have only one major weapon at their disposal, the workers’ strike.  This option is typically used in only the most severe negotiation deadlocks because it is extremely costly to every member of the union.  Because of this, the language of a CBA generally favors employers over labor.

This can only work, however, if interpreted through the lens of what is often referred to as the “law of the shop” (see pages 21-24, 27 of Judge Berman’s ruling).  Indeed, Article 46, which lies at the root of this controversy has been in place since the first CBA negotiated between the NFL and NFLPA in 1968.  Prior commissioners used the power granted them under this provision, but as has come to light in many recent discipline issues, Roger Goodell has abused it.  Judge Berman found that Commissioner Goodell had dispensed his own brand of “industrial justice” in the Deflategate arbitration hearing.

Nevertheless, the District Judge was overruled and the Chief Judge out voted, therefore at the present time dangerous technicalities stand as legal precedent.  Should this precedent be cited and followed again by this or other courts, here’s what labor might expect to see in the future.

Neutrality in arbitration is no longer a vital factor.

NFL Commissioner Roger Goodell initiated an investigation, which later came to be known as the Wells Report.  Goodell publicly praised the report and issued an extreme penalty based on the conclusions of said document.  Tom Brady and the NFLPA appealed that decision, requesting that Goodell recuse himself from the role of arbitrator, however Goodell refused.  In spite of new evidence Goodell confirmed the punishment that he had previously imposed, thus he was permitted the ability to rule upon the decision that he, himself made.  The AFL/CIO brief states this error very plainly:

“The substantiality of ‘the Commissioner’s shifting rationale for Brady’s discipline,’ . . . serves as strong evidence that the Commissioner was not acting as a neutral arbitrator considering an appeal at all, but rather as an employer seeking to justify his own initial disciplinary decision.”

In situations such as this, fairness and neutrality are an anti-thesis to reality.  Nevertheless, according to Judges Parker and Chin, this is lawful behavior.

Workers need not have notice or be aware of potential consequences of their actions.

On page 15 of the District Court ruling Berman pointed out what should be an obvious flaw; Brady was not given access, as a player, to documentation potentially applicable to expected behavior and potential consequences of a violation of such:

This point is amplified again on page 25:

If allowed to stand, Labor Management can devise rules as desired without having to provide them to workers, who can nonetheless be held accountable for violations.

Punishments need not be aligned with prescribed penalties.

The NFLPA has a collectively bargained for schedule of fines which may be imposed for various infractions, much as the criminal justice system has a range of punishments suitable for various crimes.  Goodell, however, chose to ignore this and issued a punishment of unprecedented severity without even considering CBA guidelines.  Katzmann’s opinion of dissent makes note of the obvious error:

Olson also points this out in his petition for rehearing:

” Goodell did not even mention or discuss the collectively bargained penalties for equipment-related violations—the very misconduct he alleged.”

The potential adverse consequence to workers and employees for this type of inconsistency is enormous.

An arbitrator’s ruling and punishments need not be based on the initial accusation.

In this particular instance, prior to arbitration, it was deemed “more probable than not” that Tom Brady was “generally aware” of alleged misconduct by others.  Goodell’s ruling however is based on a purported but unproven scheme by the quarterback to illegally release air from footballs. Berman affirms the NFLPA argument in this regard on page 39 of his ruling: 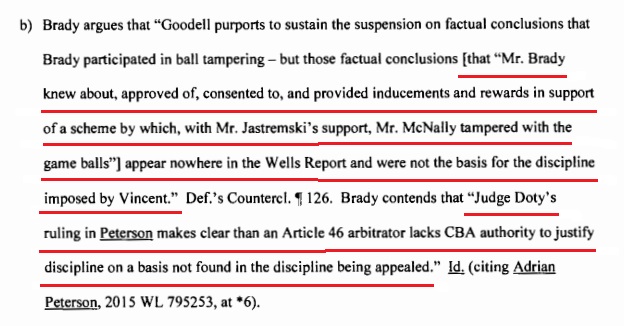 This is further elaborated in page 6 of Olson’s petition to re-hear:

Essentially if upheld and used as precedent, this means that an employee need not know all accusations against him or be disciplined according to an employer’s initial accusation.  This of course denies the employee a proper chance to defend or dispute his actions.  To put this in perspective, imagine being accused of removing pens and notepads from the office and then being disciplined for stealing a computer!

Discovery protocols need not be honored.

While Discovery is less stringent in matters of arbitration than in the court system, it is still considered an important element of justice; at least it has been in times past.  One needs to look no further than this case to see a clear and allowed breach of process.  The NFL’s lack of cooperation in this regard was duly noted in Judge Berman’s now overturned ruling: 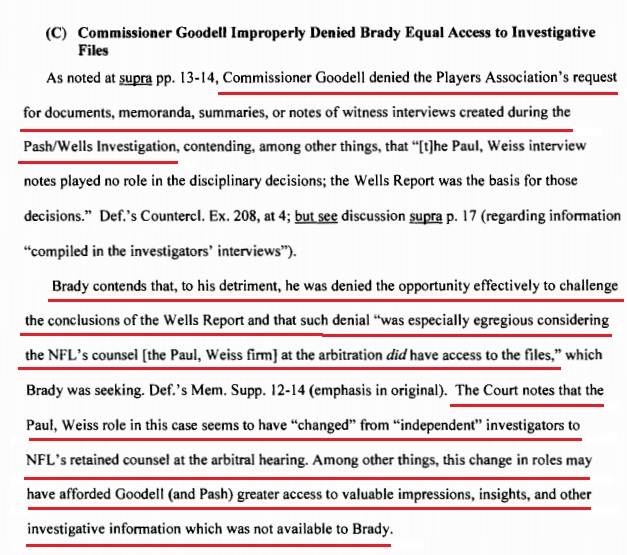 While the points above are not inclusive of all potential adverse outcomes in regard to the ruling on this case, they should merit ample cause for concern for any worker.

Feinberg’s closing amicus statement should be strongly considered and reviewed: 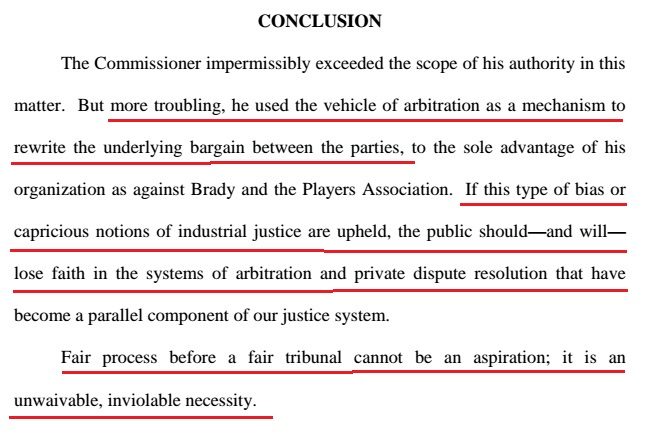 Theodore Olson has likewise providentially warned that if this ruling is not overturned, [it] “will fuel unpredictability in labor arbitrations everywhere and make labor arbitration increasingly capricious and undesirable for employers and employees alike.”

So maybe you’re tired of the Deflategate saga and just wish it would go away.  I think most people are in that boat right now — but for the good of everyone let’s hope it stays around long enough to see justice served.

Permanent link to this article: https://advocacyforfairnessinsports.org/archive/past-nfl-cases/deflategate-archive/labor1/