Permanent link to this article: https://advocacyforfairnessinsports.org/archive/past-nfl-cases/ezekiel-elliott-v-nfl/ 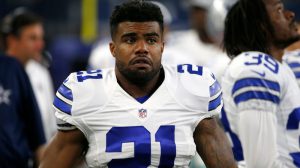 The NFL has botched a number of domestic violence investigations over the past few years unleashing a public relations nightmare for the league. A seemingly contrite Roger Goodell pledged to do better after public outrage from the Ray Rice fiasco nearly cost the NFL a lucrative Anheiser Busch relationship. Part of his new “get tough plan” included a baseline six-game suspension for first-time domestic violence offenders. Then last year he reduced that suspension for unknown mitigating circumstances to a mere one-game suspension for Giants’ kicker Josh Brown; that is until Brown’s own journal admitting abuse surfaced in the media. Another firestorm of public rage erupted, again bringing into question the NFL’s seriousness in regard to domestic violence. The NFL needed to get the next one right. Enter Ezekiel Elliott.