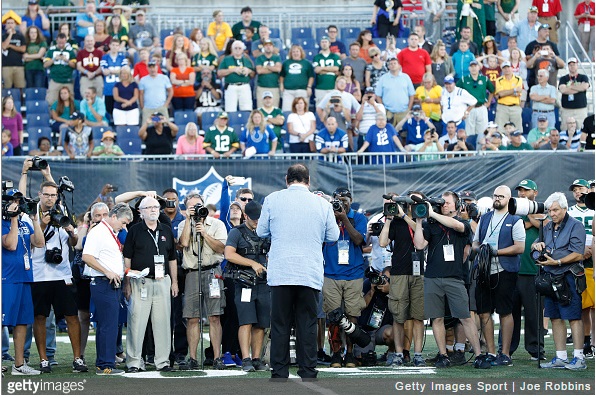 Last week, on September 9, the Pro Football Hall of Fame filed a motion to dismiss the fan suit, currently pending in the Ninth Circuit, for lack of jurisdiction.

Here’s a quick snapshot of the Pro Football HOF’s arguments for dismissal and/or transfer of the HOF Game lawsuit: pic.twitter.com/kYHGXHuO8l

In the motion, the Hall of Fame claimed no connection to California and accused the plaintiff and plaintiff’s counsel of improper forum shopping..  Additionally the Hall of Fame has asked the Court to transfer the proceedings to the Northern District of Ohio circuit court where the original suit was filed.

On September 13, the NFL filed a motion with the Court denying involvement in the Hall of Fame Game.  The NFL claimed that the ill-fated game was exclusively controlled by the Pro Football Hall of Fame, stating they had no stake in ticket sales or revenues from the same.  In the motion, the NFL asserted that a HOF game ticket  “does not confer any rights on NFL, or set forth any obligations to be undertaken by NFL.”

But, as sports law attorney Daniel Wallach pointed out on Twitter:

HOF website: “In its day-to-day operation, the Pro Football Hall of Fame works very closely with . . . the NFL” https://t.co/M7MjFtUahh

It is hard to deny the connection, however.  In addition to the facts stated above by Wallach,  NFL players are inducted into the Hall of Fame.  The annual Hall of Fame games are played by two NFL franchises.  The Hall of Fame would not exist without the NFL, therefore the connection is difficult to dismiss.  Unless, perhaps you follow the line of reasoning expressed in this tweet:

@bruceallen @WALLACHLEGAL #JudgeChin: “The evidence of a lack of association between the NFL & HoF is compelling, if not overwhelming.” 🙂

Meanwhile as the NFL and Hall of Fame seek to weaken the suit with the courts, they are pursuing similar action with the fans, or plaintiffs of the case, in trying to make a settlement outside the proposed classes. This has forced the plaintiffs’s attorney, Michael Avenatti, to file a reply stating that the NFL and Hall of Fame, “have no right to extract settlements from class members.”  Daniel Wallach, who has been on top of this case from the beginning provides the settlement offer the NFL and HOF have been sending to individual plaintiffs.

Here is the settlement offer that the Pro Football Hall of Fame has been emailing to putative class members (1/2): pic.twitter.com/o0DOterHIY

Here is the remainder of the Pro Football HOF’s settlement offer to ticket holders: pic.twitter.com/rI04celLlL

The packet is going out unsolicited to class members and “does not include a copy of the complaint or Plaintiff’s counsel’s contact info”  Wallach via Twitter provides the accusations lodged against the defendants in this regard:

Here are the new accusations lodged against the NFL in the Hall-of-Game cancellation lawsuit: pic.twitter.com/xkcSgQRNJQ

This case that will no doubt encounter many twists and turns as the NFL and Hall of Fame attempt to minimize their liability while the plaintiffs and their attorney seek reasonable compensation for losses incurred because of the mismanagement and potential fraud in relation to the game.  Thus far the Hall of Fame game suit has been an under reported story.  If you’re unfamiliar with the background on the case, this piece that I wrote will bring you up to speed, and for future updates, stay tuned.  Or better yet, if you’re on Twitter, follow @WALLACHLEGAL, who has provided consistent and up-to-the-minute coverage throughout.

Permanent link to this article: https://advocacyforfairnessinsports.org/archive/past-nfl-cases/hall-of-fame-game-suit/nfl-denies-connection/