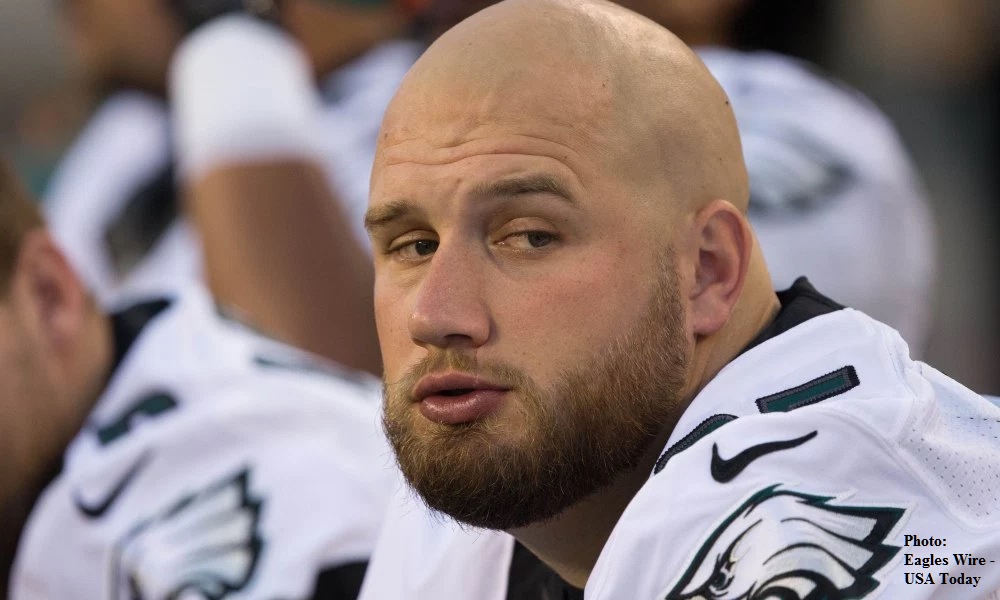 In response to a 10-game suspension for violation of the league’s Performing Enhancing Substances Policy, Philadelphia Eagles tackle Lane Johnson claims he was denied a “fundamentally fair hearing and was instead subjected to an arbitration scheme so deeply flawed as to forever preclude the possibility of a fair outcome,” in a lawsuit filed against the NFL and NFLPA last week.  The suit follows a complaint of similar allegations filed with the National Labor Relations Board and Department of Labor, by Johnson last November.

Johnson’s attorney, Stephen Zashin, who also represented Mike Pennel, in a similar suit, made the following announcement on January 6. 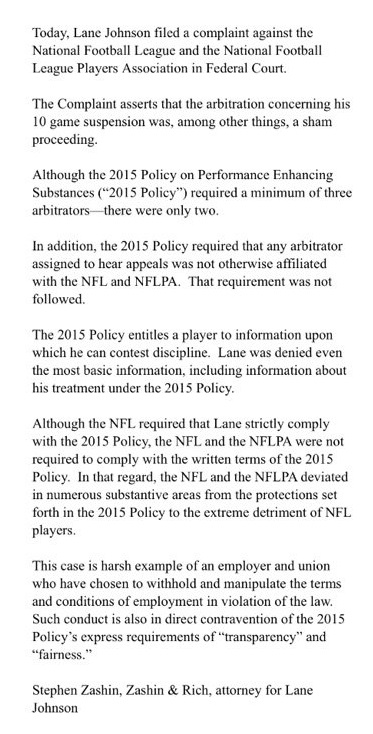 Johnson maintains that he bought a supplement online that was approved according to the Aegis App, the tool the Union provides its members to aid in determining if a substance is prohibited, and then later failed a drug test after relying on the app.  “I feel like the players have no rights,” Johnson said in August, “The supplement industry is not regulated, so you do not know what’s in it. That’s hard to believe, coming from a second-time offender, but I want that to be clear – that the NFLPA does not stand up for players.”

George Atallah, the NFLPA’s assistant director for external affairs responded to the criticism, “While the App may have listed it with a green check, players are reminded within the app, at team meetings and as part of the policy that a) supplements may contain stuff not on the label and b) there is still strict liability for putting it in your body if it contains something not on the label.”

This seems to be a matter of contention with a number of players who claim they’ve inadvertently ingested banned substances.  This lawsuit, however, is not based on the apparent difficulty in determining which substances are legal and which aren’t, but in the way his arbitration process was handled by both the league and the union in a meeting that Johnson described as “eight hours of bickering back and forth and discussing league policy”

In lessons apparently taken from Brady and Peterson, in which the circuit courts, put little weight in agreement with an arbitrator’s decision versus if the decision was grounded in the CBA, Johnson’s counsel asserts it is not.  My first reading of Johnson’s complaint revealed that he is indeed attacking the technicalities where the NFL tends to prevail, but whether or not he’d poised himself to override the arbitrator deference typically upheld by the courts seemed less clear.  For insights, I turned to David Evans, a respected arbitrator who knows the arbitration process inside out and also has a strong familiarity with the current CBA and NFLPA policy.

One of the allegations asserted by Johnson is that the testing itself was “improper,” having previously served a suspension for a PED violation and then successfully going through the mandated two-year period of “reasonable cause” testing, and then being tested under that auspices after the two years had passed.  To this Evans responded, “Johnson was a repeat offender, subject to more frequent sampling. But he claims that he fell out of the program after 2 years pursuant to the CBA. The 2 year provision was added after his first offense, however, and he basically was subject to ‘reasonable cause testing’ until he was informed otherwise.”

Like Mike Pennel, Johnson faults the number arbitrators assigned to hear appeals.  The CBA specifies that at least three and no more than five arbitrators must be retained.  While only two arbitrators were assigned, this appears to be an agreed-upon provision by both the league and Players Association.  In Pennel’s case, a third arbitrator was added to the rotation, likely to put a quick end to his argument, but in Johnson’s case, he would need to prove that having only two arbitrators in the rotation (as opposed to three, four or five) somehow caused him harm.  This would be extremely difficult to argue and prove.

Unlike in Article 46 of the CBA where the commissioner or his designate is authorized to hear player appeals, under the Performance Enhancing Substances Policy, a neutral arbitrator is bargained for.  Because of his law firm’s representation of the NFL in other matters, Johnson contends that James Carter, the arbitrator assigned to hear his case was not “neutral.”  His allegations supporting Carter’s non-neutrality primarily center around Carter’s refusal to release certain correspondence and files requested for discovery.  To this claim, Evans referred to Carter as “a well-known and respected arbitrator,” and said that the “challenge to Carter’s independence because his law firm does NFL work will also fail because he was approved for the panel by the NFLPA.”

Much of Johnson’s complaint revolves around what he felt was improper handling of the “B sample” of urine which must be tested if the “A sample” is returned as positive.  I asked Evans if he felt Johnson might fare better in this regard.  “The complaints about handling of specimens, lab protocols etc. are also unlikely to get any traction in court,” he said.  They reflect a misreading of the CBA requirements regarding specimen certification, collection and analysis. Nothing resonates as important to the ultimate conclusion.”

In summary, Evans said, “The case asserts a number of mostly procedural defects in the PED collection and suspension process.” He also states that Arbitrator Carter, “disposed of most of the arguments in his award.”  Evans goes on to explain that this case “raises similar complaints as the last Ohio case [Pennel] about the rotation of arbitrators. He also challenges the independence of the program administrators. These deviations from the CBA, if they occurred, appear to have been consented to by the NFLPA.”  Neither the NFL  nor NFLPA have issued public statements regarding the lawsuit at this time.

Since the Pennel case settled and his suspension was reduced, it is possible this will take place here as well.  Based on Evans’ evaluation, it would probably be in Johnson’s best interest to do so if the defendants are agreeable.  Though his suspension has already been served, he would recoup lost income for any games that might be restored.  If the NFL and NFLPA have no desire to settle the case, it appears that Johnson has an uphill battle ahead.

Though Johnson’s legal arguments likely lack the strength to prevail, I don’t expect this issue to go away any time in the near future.  A number of athletes have complained about the difficulty in determining what’s allowed and what isn’t, and while both the NFL and NFLPA would probably assert that the players who fail tests are not exercising due diligence, many players seem to disagree.  During the course of the season, most players are consumed with practice, film study and learning a playbook that is often four-inches-thick.  While they are provided the information they need, the large packets full of legalese are often placed on a shelf unread, or put off until a more convenient time which unfortunately can be too late.  A related issue is the league’s stance on the use of marijuana, which is banned under the Substance Abuse Policy, but is legal in many of the states where players live and work.  As the current CBA counts down to the next negotiation period, I expect these issues to be among the hot-button areas where players will demand change.

Permanent link to this article: https://advocacyforfairnessinsports.org/archive/past-nfl-cases/lane-johnson-v-nflpa-nfl/eagles-tackle-lane-johnson-claims-his-suspension-is-a-result-of-misconduct-by-nfl-nflpa/