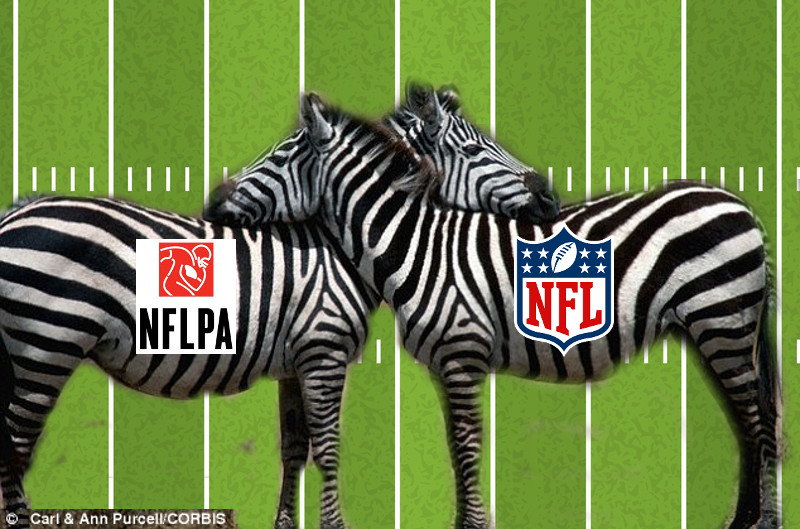 Attorney Cyrus Mehri may very well be the hero that the National Football League Players Association needs, even if he isn’t the hero that the leadership of the NFLPA deserves. A report by Mehri recently detailed how the union has harmed the interests of its membership, whose sole purpose it is supposed to be to serve, by giving the millions of dollars it has to dole out in legal fees to attorneys and firms with blatant anti-labor biases. With his findings, Mehri concludes that the NFLPA has become the dramatic foil to its express purpose, working against the interests of NFL players instead of protecting them. Recent developments in somewhat unrelated matters act to substantiate Mehri’s claims.

Lane Johnson is a Philadelphia Eagles offensive lineman, who after failing a second drug test, was subject to the discipline process for such a violation under the current CBA. Johnson appealed the suspension he received but found no relief, and thus filed suit against both the NFL and the PA for what he views as misconduct in January.

Recently, many current NFL players representing several disparate franchises formed a separate organization, called the “Players Coalition.” The purpose of the group is to address the social issues that have prompted many players to kneel or sit during the playing of “The Star Spangled Banner” prior to NFL games.

The details of both of these storylines support Mehri’s stance that the NFLPA has become just an extension of the league, making it not only impotent in representing their interests, but actually harmful to those interests.

Johnson’s case and Mehri’s story both bring to light a lack of transparency in the PA among its membership. Mehri announced his candidacy for the position of executive director of the NFLPA in August, which had an election for the position by the sum of its membership scheduled. However, the PA’s board of player representatives voted to create an executive committee in March of 2015, and then in March of 2016 changes to the PA’s constitution were made without the knowledge of the general membership.

Those changes gave the committee power to unilaterally decide on a candidate, without any input from the membership at large. The committee did so on the first day it was able to do so, re-electing DeMaurice Smith for another three-year term in September. Despite NFLPA president Eric Winston’s insistence that, “it’s a democratic organization,” it seems that Smith was retained because the only conversation that was had among the 14 members of the committee was whether or not the committee wanted to extend the sitting director, not whether or not any alternatives would be better.

Another quote by Winston sums up the sentiments of the executive committee: “This is the position we’re in, this is the position we want to be in, and this is the guy that is going to help take us there.” While Winston’s words about the position that the PA finds is in could be read several different ways, and Winston is also unclear here about what the position he wants to be in entails, it’s obvious that the committee has confidence in Smith. Whether or not the membership at large shares that sentiment is unclear. They never got a chance to express an opinion on that matter either way.

That lack of transparency has also been revealed by Johnson’s suit. Since the negotiation of the 2011 CBA that Smith oversaw, there have been several changes to the language of the governing policy regarding player drug tests and the adjudication of appeals of discipline resulting from such activity. Again, this was done without the involvement of the membership of the PA.

According to the CBA, a neutral arbitrator is to be assigned from a pool of three to five candidates to preside over hearings of appeals of disciplinary action resulting from failed drugs tests, without notification to the players, that pool was shrunk to two candidates. When Johnson filed his appeal, he was left with only one possible arbitrator, because originally-assigned Glenn Wong was removed from the hearing due to reasons undisclosed to Johnson. Johnson was thus forced to choose between the lesser of two evils: drop his appeal and serve the suspension or continue with the proceeding before an arbitrator of the league’s choosing. He chose to proceed and the PA labeled that as Johnson’s endorsement of arbitrator James Carter.

In addition to the fact that Carter had a potential conflict of interest because his firm, Wilmer Hale, had previously represented the NFL, Johnson was denied the right to other arbitrator options that should have been afforded to him under the language of the CBA. In response to this, the PA took no action whatsoever. In fact, Johnson has been denied any written documentation of policy change in this regard according to a Nov. 8 filing.

“Contrary to the NFLPA’s arguments, and unaddressed in its Opposition, Johnson sought information about the operation of the Policy’s arbitrator selection process and arbitrators.  The NFL refused to respond on grounds that the information was ‘beyond the scope of discovery of the policy.’”

There is another policy change that has been enacted since the CBA was ratified, which again, is in violation of the CBA terms. The CBA called for a neutral chief forensic toxicologist to verify the results of tests found to contain violations. That step to ensure integrity has been removed, without the notification of the players. Again, the PA has taken no action to address that violation of the CBA.

The same lack of transparency signaling a failure by the PA has become evident in the storyline of the Players Coalition.

A second player advocacy organization existing outside of the PA is a strong indictment of the PA’s failures in and of itself, but it also highlights how conditioned players under Smith’s leadership have become to fighting among themselves and handing power over to the league/owners.

The disassociated players have raised concerns over the league effectively trying to buy an end to their civil rights demonstrations with monetary donations to non-profits. Reid has criticized the leadership of the coalition for arranging secret meetings with NFL Commissioner Roger Goodell.

Additionally, the players object to a proposed structure for determining how those monies are delved out. Reid said that the committee would include two league officials, five owners and five players. Reid points out the obvious: the league would have the power to outvote the players and potentially turn this initiative meant to be a benefit to the players’ communities into a sham.

A sham is exactly what the NFLPA’s stated mission to advocate for its membership could be described as. Mehri goes into great detail about how the PA under Smith has used law firms with blatant anti-labor, anti-union biases to represent itself, thus taking player dollars paid in union dues and at the very least being irresponsible with them by hiring such counsel. In addition, the PA hired Jeffrey Kessler to represent a player’s interest in the Ezekiel Elliott case while simultaneously employing Kessler to represent itself against a player’s interest in the Johnson suit. That opens the door for Johnson’s attorney to use Kessler’s own arguments regarding issues like the importance of sticking to the language of the CBA, player access to records, and the neutrality of the arbitrator that he made in the Elliott case against Kessler in the Johnson case. At best, that’s a foolish oversight.

If the PA’s failure to negotiate an equitable CBA in 2011, with benefits like lifetime health insurance and guaranteed contracts which professional athletes in other leagues enjoy were the sum total of the incompetence and cooperation with the league, that would be sufficient grounds in and of itself to necessitate massive reform in the organization. Unfortunately for the PA’s thousands of members, that’s just the beginning. The PA has failed to hold the league accountable for violating the CBA, been foolish with its resources and excluded its membership from the most important aspects of its governance.

It’s no coincidence that Johnson’s suit names the NFL and the PA as co-defendants. The two organizations might as well be one entity.

Permanent link to this article: https://advocacyforfairnessinsports.org/archive/past-nfl-cases/lane-johnson-v-nflpa-nfl/lane-johnson-lawsuit-and-players-coalition-prove-cyrus-mehri-is-right-about-nflpa/