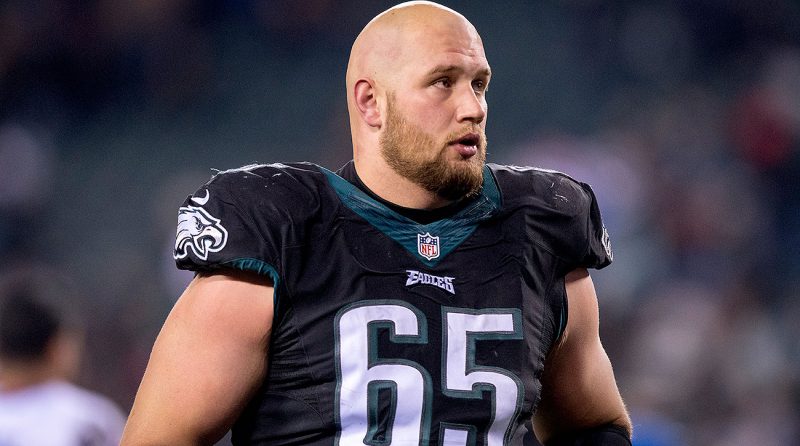 In January Philadelphia Eagles’ offensive tackle Lane Johnson filed an unusual lawsuit in the Northern District of Ohio.  His complaint alleges that Johnson is the victim of an unfair arbitration due to possible collusion between the NFL and the NFL Players Association to deny him due process as bargained for in the CBA regarding a 10-game PED violation suspension.

Johnson’s first PED infraction occurred in 2014 when he failed a drug test and said that it was the result of taking a physician prescribed medication which unknown to him, contained ingredients that were prohibited under the NFL and NFLPA’s collectively bargained policy.  Under CBA rules, it is irrelevant as to why a banned substance is in a player’s system, only that it is, and he alone is responsible for what he may ingest.  As a result of the 2014 drug test, Johnson became subject to “reasonable cause testing” which according to his interpretation of the CBA was to last two years – and until July 11, 2016, shortly after two years had elapsed, he passed each drug test administered.

Again, Johnson claims he was unaware that he ingested a banned substance, this time attributing it to an unlisted ingredient in a supplement he took.  Afterward, he criticized the union, claiming that he relied on the Aegis app they provided to players in determining if the supplement was allowed, and stated that it was not included in a list of banned products.  The union responded that his statement was “factually inaccurate,” and that they have never indicated the app guarantees a product’s compliance.  Johnson believes his criticism of the players’ association resulted in retaliation by the union and failure to properly represent his interest as he challenged his suspension.

According to standards outlined in the CBA, urine samples are to be divided into an “A” sample and a “B” sample.  If the “A” sample tests positive, then certain procedures are to be followed in regard to the testing of the “B” sample.  Johnson alleges these procedures were not followed and that he was denied relevant information regarding the “B” sample testing which compromised his ability to defend himself.  Among additional allegations, he further believes the union and league cooperated in this regard and also in approving a neutral arbitrator who wasn’t truly neutral due to his firm’s representation of the NFL in other matters.

The NFL responded to the lawsuit by filing a motion to dismiss or alternately transfer it to the Southern District of New York claiming that the case has no relevant ties to Ohio, where it was filed, and should be litigated where league offices are located in New York if the suit is permitted to move forward.

A short time later, the NFLPA filed a sealed motion to dismiss.  Both the NFL and NFLPA agree that Johnson’s arbitration ruling was correctly upheld because by his own admission he ingested the substance in question and that the lawsuit should be moved to New York, claiming the case has no connection to Ohio outside of it being the location of Johnson’s lawyers.

On February 8, Judge Sara Lioi issued an order staying, or placing on hold the proceedings until she could render a decision on the motions to dismiss or transfer.  While venue shopping is quite common in federal cases, Lane Johnson appears to be in an all out “turf war” with the defendants.  In violation of the order, Johnson presented the judge with a “Valentine gift” on February 14, in filing an amended complaint which attempted to show further case connections to Ohio.

The amended complaint claims numerous connections to Ohio, including:

Because of these and other considerations, Johnson pled that “the venue is proper.”

At this point, it seems that the defendants decided to violate the judge’s stay as well, replying to Johnson the following day. 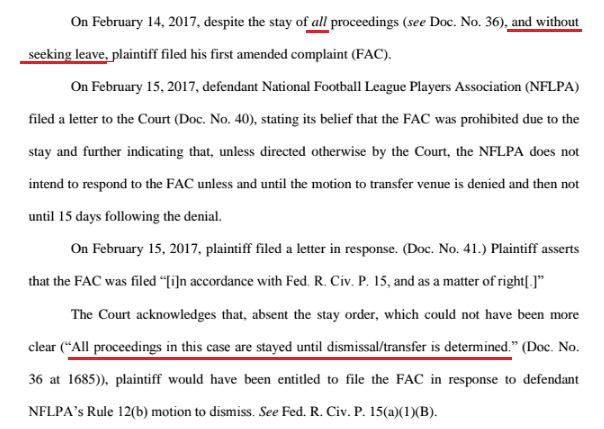 It seems that at least for now Johnson’s unorthodox strategy of defying a court order has worked.  Judge Lioi, while stating that she could have rejected Johnson’s amended complaint, decided to lift the stay and allow the lawsuit to progress with any supplemental motions or responses the litigants may choose to file through April 10.

What remains to be seen is how much traction Johnson’s lawsuit will gain beyond that point.  He will likely view it as a huge win if he is able to keep the lawsuit in Ohio and avoid New York since that district has generally been perceived as favorable to the NFL in past litigation.  Even if the lawsuit remains in Ohio, Johnson faces a high hurdle in overcoming court deference to arbitration.  In order to succeed he will have to convince the court not only that he was unjustly treated but that the arbitration proceedings ran afoul of the CBA and NLRA rules, and that the appeals process was so fraudulent it was in violation of the law.  This appears unlikely in that James Carter is a well respected and experienced arbitrator, and a neutral agreed upon by both the NFL and NFLPA.  He would not appear to be viewed as biased, in contrast to the commissioner arbitrating his own disciplinary decisions.

If Johnson should prevail, however, as UNH law professor and Sports Illustrated legal analyst Michael McCann noted in his initial breakdown of the case, “Johnson’s strategy of suing both the NFL and NFLPA offers a potential new approach for players who are dissatisfied with how they are treated and demand change.”

Permanent link to this article: https://advocacyforfairnessinsports.org/archive/past-nfl-cases/lane-johnson-v-nflpa-nfl/lane-johnson-violates-a-court-order-to-engage-in-a-turf-war-with-the-nfl-and-nflpa/