Lane Johnson Wants Discovery as His Battle with NFLPA Intensifies 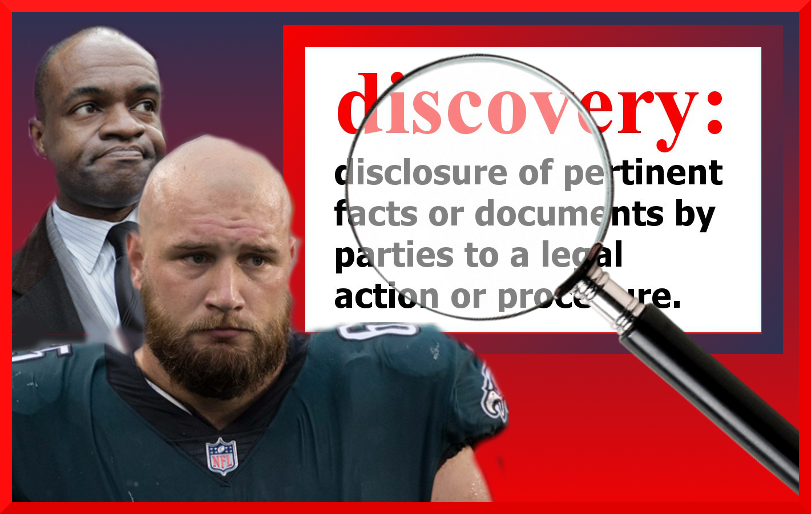 The NFLPA has summoned all the king’s horses and all the king’s men to blitz Eagles OT Lane Johnson, but he and his attorney Steve Zashin have demonstrated they won’t go down without a fight and they’re seeking discovery in order finally prove Johnson’s allegations.

As I reported previously, Judge Richard Sullivan dismissed all of Johnson’s claims against the NFLPA on procedural grounds except one—a LMRDA violation in which the union refused to provide Johnson with all documents related to his CBA which involved the handling of PED violations.  Facing a suspension for a PED violation for a substance which Johnson maintains had a green checkmark in the union-provided Aegis app, he says he was then stalled and evaded as he tried to defend himself in the union-bargained arbitration without the benefit of discovery including the very documents his suspension was based on.

For all practical purposes, Johnson had to fight his case with one hand tied behind his back all the way from arbitration to federal court since he had no access to the documents that determined his fate.  Johnson accuses the union of retaliating against him because he dared to voice criticism describing how he was essentially thrown to the wolves.  As the case proceeds, the NFLPA seems determined to prove him right.

Following Johnson’s indication to fully pursue his rights attached to the LMRDA count, NFLPA has filed a motion for summary judgment seeking to put an end to Johnson’s lawsuit supported by a posse of declarations.

In the briefs seeking to extinguish the lawsuit, NFLPA claims it has now provided Johnson with all relevant documents, which they assert nullify his claim.

It’s interesting to note that a document dated December 1, 2016 is purported to correct an injury that Johnson suffered up to and through October 11, 2016. 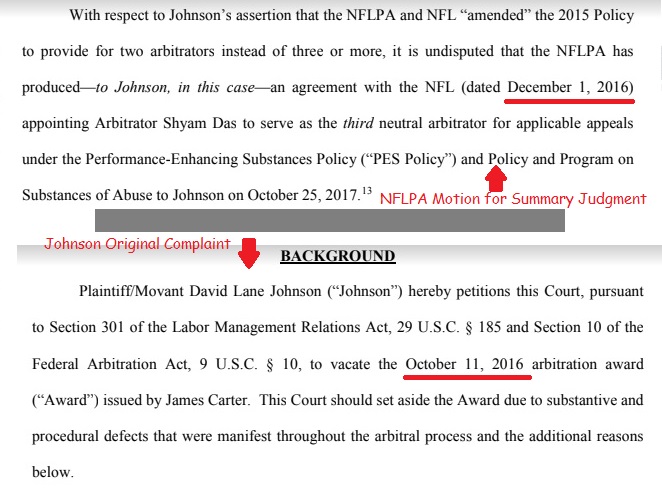 How can this possibly be of any benefit to Johnson when obviously the union made the correction as a result of Johnson’s complaints and in anticipation of his lawsuit to be filed about a month later.  How does the appointment of an additional arbitrator after Johnson’s arbitration had already concluded benefit him in any way?

The NFLPA further addresses documents Johnson claims he was denied: 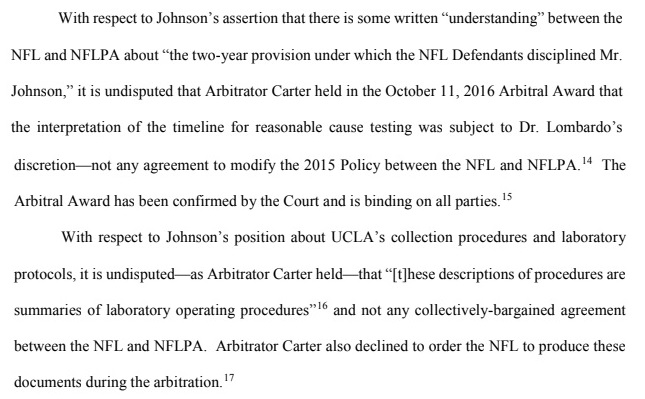 The first paragraph should be cause for concern for every NFL player. If no written understanding was made and through oral agreement the union is permitted to engage in conduct and procedures undisclosed to its membership, i.e., “Dr. Lombardo’s discretion,” how are players to even discern what they have and have not bargained for?

The 2015 Policy on Performance Enhancing Substances (as presented to Johnson and displayed on the internet) details procedures and a chain of command for drug testing, and specifically, in Johnson’s case, the handling of a “B” sample.  If, as NFLPA states, these provisions are reflective of laboratory operating procedures, if the procedures have been changed or modified, shouldn’t this be reflected in documentation?  If the answer to this is “no,” one could credibly ask why Section 4 of the policy even exists and if it might be replaced with a section that reads something like this: “The parties involved in the testing will act in accordance with their own wishes and players need not be informed of any details.”

When I stated that NFLPA has “summoned all the king’s horses and all the king’s men” to blitz Johnson, I’m referring to their top litigator, Jeffrey Kessler and other Winston Strawn attorneys, NFLPA in house counsel Heather McPhee, and Groom Law Group attorney Stephen Saxon, whom the union says represents them in labor matters.  I was somewhat surprised to see that Groom Law Group is still representing NFLPA since they are counsel for the retirement and disability plans, and as such, on information and belief the NFL discontinued use of Groom to avoid the appearance of a conflict of interest.  I guess the NFLPA isn’t terribly concerned about that, but that’s a conflict to address another day.

Both McPhee and Saxon state they are not aware of oral agreements to modify the Policy.  Saxon says, “I am not aware of any—and understand there is no—side agreement relating to the bargaining parties’ interpretation of the timeline for reasonable cause testing.”  This is a major reason Johnson needs discovery.  Documentation says one thing. Attorneys affirm through declaration they are unaware of modifications, yet the procedure surrounding Johnson’s PED handling, reasonable cause testing, and related issues deviate from written policy and document production.  How and why did this occur?

Johnson’s attorney, Steve Zashin, responded to the NFLPA through a letter to Judge Sullivan on November 19. 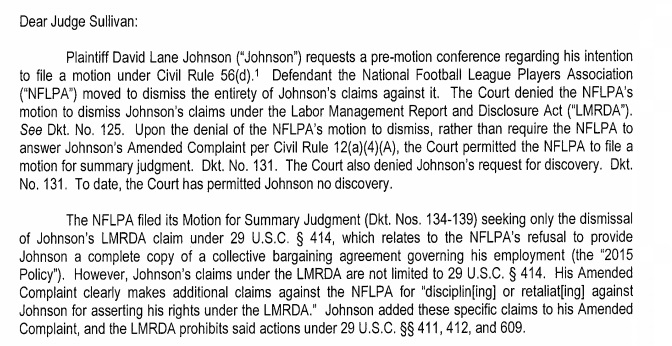 NFLPA seeks summary judgment based on FRCP §56.1, claiming no material dispute of facts.

Zashin, begs to differ.  Johnson and the NFLPA most definitely dispute the facts and Johnson has not received the benefit of discovery in order to fully have the opportunity to prove his claims.

The NFLPA says Johnson’s claim is moot since they, after-the-fact in 2018 provided some of the information that he asked for in 2016, and aver that the other information Johnson seeks is non-existent.

Because the case has been involved in procedural motions to this point, with no substantive discovery taking place or merits of the case addressed, NFLPA has ignored Johnson’s allegations of retaliation.

Zashin addresses the observable inconsistencies and asserts, “Heather McPhee’s declaration in support of the NFLPA’s Motion for Summary Judgment, in which she states she does not ‘believe’ there were any ‘oral agreements between the NFLPA and the NFL to modify the [applicable collective bargaining agreement]’, is hardly conclusive or definitive and leaves open the possibility that such agreements exist.”  He points out her belief conflicts with an assertion made by the NFLPA when the case was still in Ohio.

Never has any documentation been produced to verify the mutual consent which undoubtedly took place.  As mentioned previously, Johnson’s arbitration took place in October 2016 and in December 2016 a third arbitrator was added to retroactively correct the deviation from CBA defined procedure.  This doesn’t help Johnson, nor does it explain why “the NFLPA’s counsel further stated he was unsure whether the referenced modification was oral or in writing.” It also doesn’t explain why an agreement no one can seem to identify supplanted CBA terms with no input or notice to membership.

Since NFLPA relies on declarations in which Heather McPhee and Stephen Saxon disavow knowledge of certain deviations, Zashin points out that both Ms. McPhee and Mr. Saxon face credibility issues.

Aside from the issue of persons Johnson has accused of collusion disavowing knowledge of NFLPA actions, Zashin specifically points out two areas of document production in which NFLPA has failed to produce anything to support their assertions.

On November 19, Judge Sullivan ordered the NFL to respond. 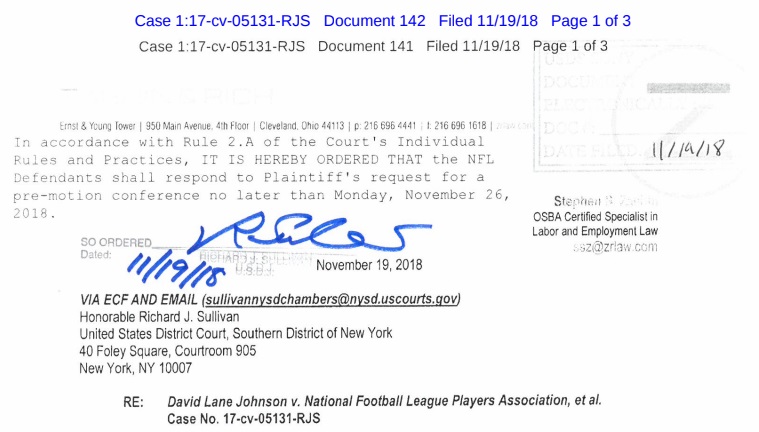 Since Johnson’s request isn’t directed to NFL Defendants, but rather the NFLPA, hopefully the appropriate party will respond.  (I guess judges are capable of typos just like the rest of us.)

Hopefully, Johnson will be permitted at last, to obtain the discovery he has sought for almost two years in two federal courts.  It’s troubling that a union member would ever have to go to these lengths to get an answer to questions owed to him by virtue of his union membership, not to mention lawful obligation of the same.  Then again, it’s not a pleasant contemplation that union leadership might conspire against one of their own members.  A settlement shortly after the case was filed would have made a lot more sense than trying to steamroll a union member, because someone was apparently offended by Johnson’s criticism.

Johnson’s criticism could have been taken as constructive and used as a catalyst to find better ways of protecting players from accidental ingestion of banned substances. It could have jump-started a plan to modify the cumbersome list of modest, at best “performance enhancers” including medications with legitimate medical use without a player having to second guess anything his doctor might prescribe.  Had the NFLPA taken this approach and then supported Johnson as he tried to appeal the suspension, there would have been no lawsuit.

Unfortunately, this isn’t the reality. NFLPA has shown itself to be reactive, jeopardizing long-term goals in exchange for a short-sighted result.

Since January 18, 2017, the day Jeffrey Kessler filed notice of appearance in this case, I’ve been critical regarding NFLPA’s use of Kessler against a union member. To avoid misunderstanding, I wish to make clear that I have great respect for Kessler’s work and my misgivings are directed at NFLPA management and not Mr. Kessler.  Based on the volume of cases Kessler and his colleagues at Winston Strawn have handled for NFLPA it seems reasonable to believe that he is under retainer, and as such he is bound by the ABA Code of Professional Conduct which dictates, “The duty of a lawyer, both to his client and to the legal system, is to represent his client zealously within the bounds of the law.”  While Kessler has vigorously argued on behalf of players in prior lawsuits the NFLPA was the client.

Instead of using in-house counsel or retaining a different firm, the union has placed Mr. Kessler in the position where his arguments against Lane Johnson will be used against him in his next representation of a union member through the NFLPA.  This has already occurred in the Ezekiel Elliott lawsuit and threatens to undermine the next player who already faces nearly insurmountable odds in overturning an unfair NFL arbitration in view of binding Second Circuit precedent.  In allowing Lane Johnson’s lawsuit to progress to this point, the NFLPA has not only sabotaged Johnson, but their best attorney and union members who will need his services in the future.

In this sense, even if NFLPA wins summary judgment or an ultimate victory in this case, in reality they still lose.

Permanent link to this article: https://advocacyforfairnessinsports.org/archive/past-nfl-cases/lane-johnson-v-nflpa-nfl/lane-johnson-wants-discovery/