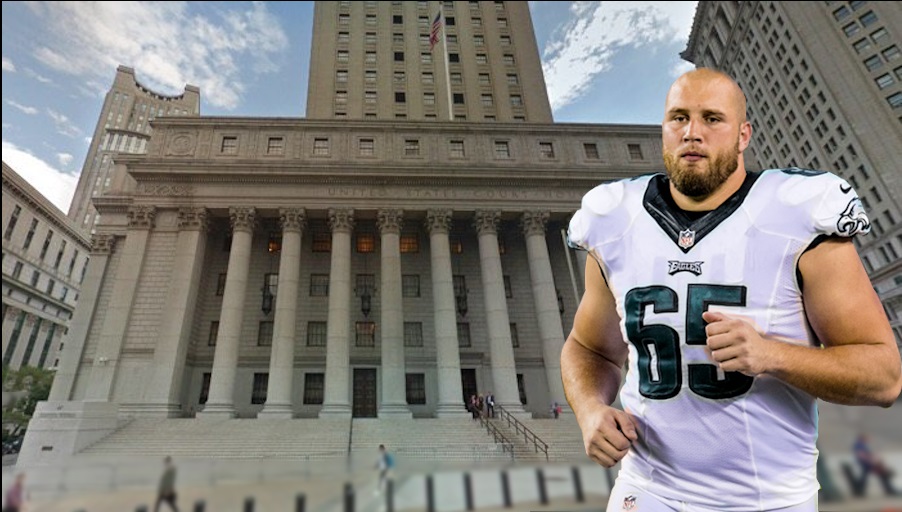 On Monday, Lane Johnson of the Philadelphia Eagles left the game after sustaining brutal blindside hit when his quarterback, Carson Wentz, unprotected on the left, slammed into the offensive lineman’s leg during a sack by Dalvin Tomlinson of the New York Giants.

On Tuesday Johnson, in a brief filed at the Second Circuity Court of Appeals by his attorney Stephen Zashin, accused the NFLPA of a blindside shot of their own and Southern District of New York Judge Richard Sullivan of abusing his discretion in dismissing his claims.

In the 32-page brief, Johnson asserts that the NFLPA refused to provide him a complete copy of his collective bargaining agreement (CBA) sabotaging his defense of a PED suspension in which both the NFL and NFLPA refused to play by their own agreed-upon rules and frequently contradicted each other in their attempts to impede Johnson’s defense and cover their apparent back-door deals altering the CBA.

Johnson, who is currently the highest-paid right tackle in the NFL missed 10 games due to the PED suspension in which he maintains that the supplement that resulted in a positive test appeared to be approved, with a green checkmark in the Aegis App provided to players.  Johnson’s suspension cost him millions of dollars and was also costly to the Philadelphia Eagles who finished dead last in the NFC East in 2016.  Two years later, with Johnson back on the field, they won the Super Bowl.

In the appellant brief, Johnson leads with a statement of six issues the appellate court must resolve. 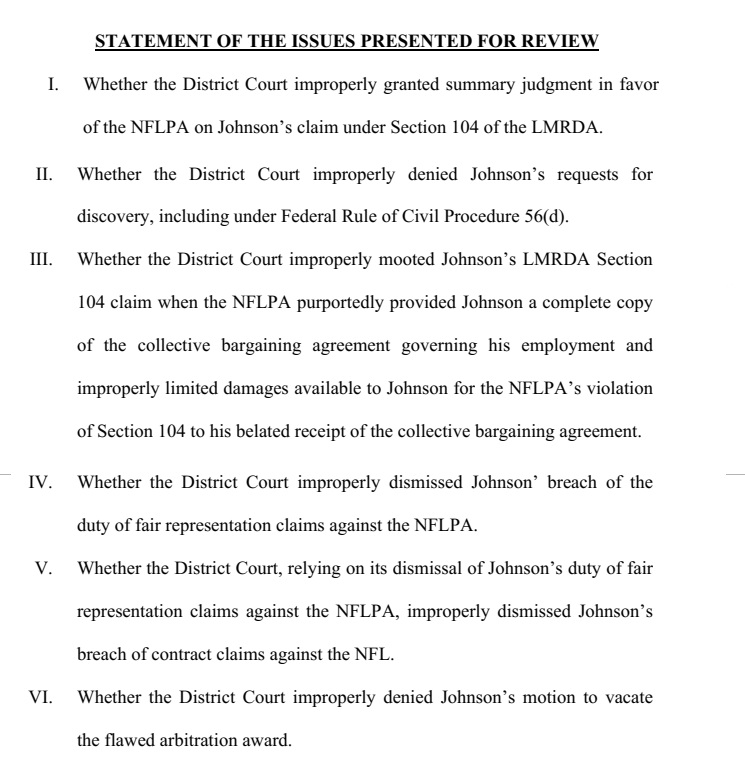 I’ve written quite a bit about Johnson’s case as it was working its way through the district court, and at one point compared the NFLPA’s tactics to the “Who’s on First?” comedy sketch in which the confusion just continues to amplify as the dialog progresses. With those articles in place, I’ll focus on the major points brought out in Johnson’s brief.

In recapping the events, Zashin describes how Johnson received notice that he’d tested positive for a banned substance mid-2016 and would be disciplined.  It was here that Johnson ran into what would be the first of many inconsistencies.  Instead of the five arbitrators provided for in the CBA, only two had been appointed, and only one was available to hear his appeal.  Wilmer Hale, the firm of James Carter, the sole arbitrator available has done considerable work for the NFL, creating what Johnson believes is a conflict of interest.  Carter upheld Johnson’s suspension on October 11, 2016.

In the time leading up to the arbitration, Johnson repeatedly requested a complete copy of the complete CBA.

As Zashin explains further along in the brief, this is required by law (Section 104 LMRDA) and as interpreted in the Department of Labor’s OLMS Manual. 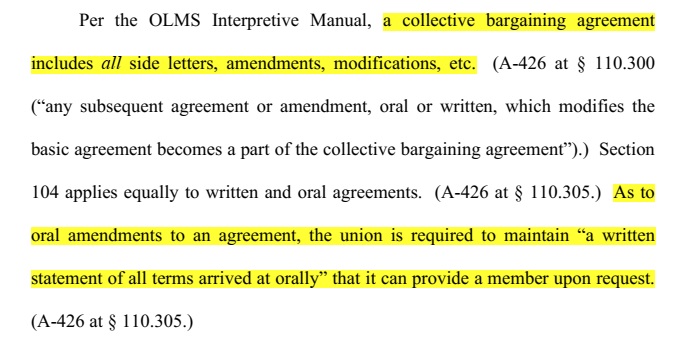 It’s abundantly clear that documents referenced and incorporated into a collective bargaining agreement also become part of the agreement and a union must produce them upon a member’s request. Johnson is still not convinced that the NFLPA has provided this to him and as such, has posed problems for him throughout the entirety of the litigation on through the district court’s improper grant of summary judgment. 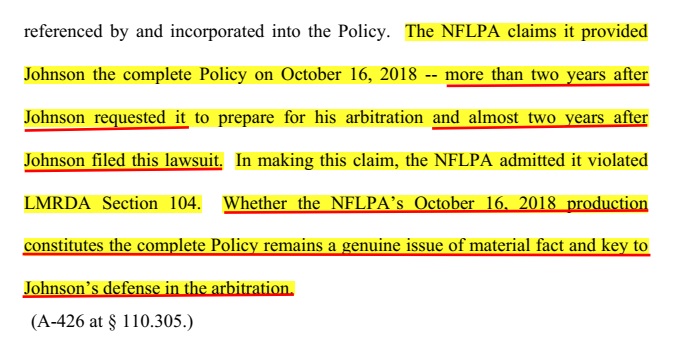 Johnson made multiple requests for discovery to no avail, with Judge Richard Sullivan leaning heavily on Twombly to claim that Johnson had not met the plausibility threshold.  But—even without the benefit of discovery, Johnson identified at least three deviations from the CBA provided to him that as yet, he’s received no documentation to support that these areas were legally changed.

No documentation of the reduction from “three to five arbitrators” to two has ever been made available.  While both the NFL and NFLPA concur that they agreed to lower the number of arbitrators, both tell a different tale as to how it came about.

Zashin points out that the policy on substances of abuse contains an identical provision for three to five arbitrators.  Mere months before Johnson’s case, Zashin represented another player, Mike Pennel, who discovered that only two arbitrators had been appointed despite the CBA’s provision for a minimum of three.  Unlike Judge Sullivan, Judge John Adams, who presided over Pennel’s lawsuit found the “back-door” dealings between NFL and NFLPA to be problematic. 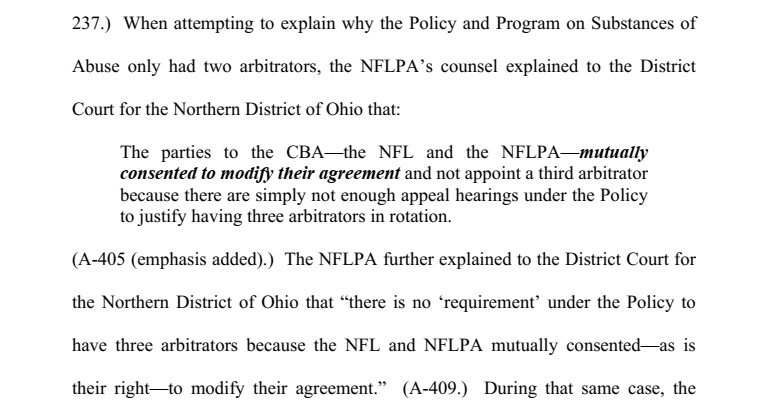 The NFLPA further stated to the Ohio court that the policy had been in effect “for a couple of years,” acknowledging its existence while failing to provide documentation of the same.  Inconsistent with its statements in Ohio, the NFLPA told the New York court there was no agreement on the subject to produce. 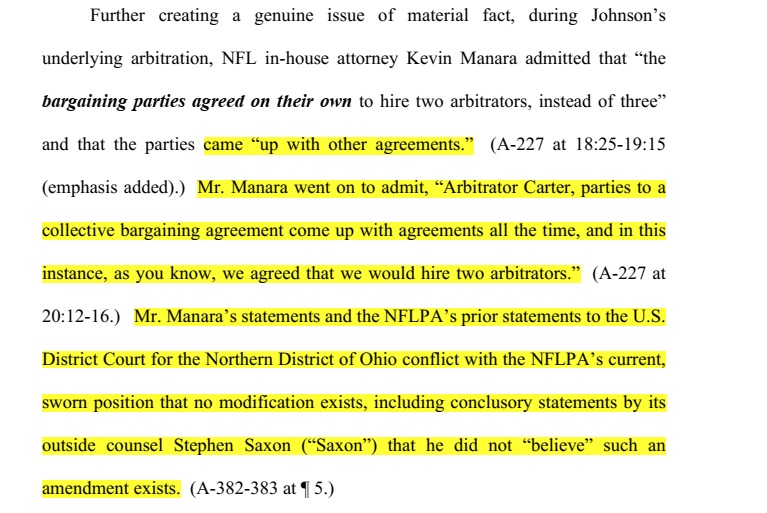 Professor Sam Ehrlich elaborated on the problematic back door dealings of the NFLPA in an academic paper cited in Johnson’s brief:

Zashin writes, “The Policy expressly requires that testing for prohibited substances occur ‘in accordance with the collection procedures and testing protocols of the Policy and the protocols of the testing laboratory.’” These protocols are referenced as the “Collection Procedures.”

Additionally, the Policy requires that “the bargaining parties—the NFLPA and the NFLMC—annually review and approve the testing protocols.”  It further includes “procedures for handling of NFL Player specimens following laboratory analysis, which shall be subject to approval by the Parties.” 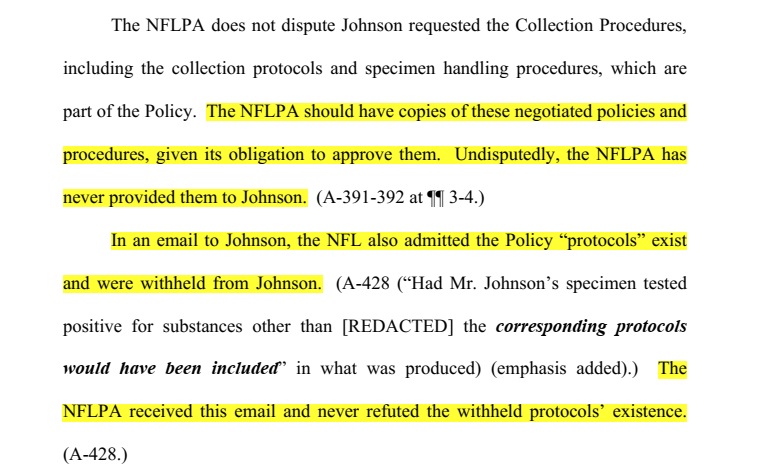 It would seem this alone would have been sufficient as to merit discovery.  It would also seem that there is a genuine dispute of material fact regarding the very provisions that were used to determine that Johnson’s “B Sample” tested positive for a performance-enhancing substance which formed the basis for his suspension.

The 2015 CBA policy clearly identifies Dr. Brian Finkle as the CFT, but Finkle did not perform the testing of Johnson’s “B-Sample.”  To explain this away, the NFLPA cites language in the 2014 policy.

Why Was Johnson Placed on Reasonable Cause Testing for More than 2 Years?

The Drug Policy states that after a PED offense, a player is placed on reasonable cause testing for a period of two years.  Despite the plain language, which both the court and arbitrator recognized and despite the fact Johnson was tested after the expiration of the two-year period, no reasonable explanation has ever been produced.

According to the appellate brief, the NFLPA told Johnson, the arbitrator, and finally the court that an amendment had been adopted but it has never been produced.

Either an agreement was made and NFLPA is still not in compliance with Section 104 of LMRDA or a conscious and arbitrary choice was made to test Johnson outside the time frame specified in the Policy.

In the BEST case scenario, Johnson was presented a complete copy of the CBA and amending policies over 2 years after his arbitration and entry to federal court.  Should the ruling stand it will only serve to fuel union misconduct, as Zashin makes abundantly clear. 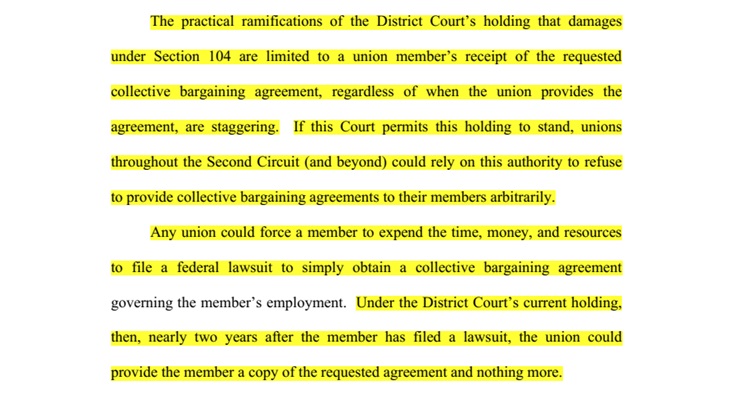 It’s hard to imagine why Judge Sullivan brushed this aside so easily.  When dismissing the LMRA portions of Johnson’s claim, he found them in violation of LMRDA, which provides for, among other damages, punitive awards to discourage union misconduct.

Sullivan never acknowledged, nor addressed Johnson’s LMRDA claims in their entirety which in addition to the NFLPA’s refusal to turn over the complete collective bargaining agreement, included a retaliation claim. Since he failed to share his reasoning by failing to even acknowledge the claim existed, Judge Sullivan leaves his own impartiality and credibility severely in question.

Improper Summary Judgment Undermines the Credibility of the Judiciary

It’s not enough for a plaintiff to see his day in court; when he arrives, our laws indicate that he will receive a fair and impartial hearing.  While much civil procedure heavily favors defendants, summary judgment is considered to be proper only when the material facts of the case have been argued and are undisputed, leaving only interpretation of the law at question.  This is not the case for Lane Johnson.

It’s truly difficult to see how Judge Sullivan arrived at summary judgment without the benefit of discovery.  Instead of granting discovery as Johnson requested, he took the word of two of the people Johnson wanted to depose.

Zashin points out in the brief that nowhere is it said that McPhee or Saxon claim that all policy amendments or modifications must go through them or that they are solely responsible for negotiating, approving, or even maintaining all amendments and modifications. “That the two ‘believe’ or are ‘not aware’ of amendments hardly establishes conclusive facts for purposes of summary judgment.”  Further indications of improper dismissal rest in the fact that Judge Sullivan simply took Saxon and McPhee at their word despite, as noted in Johnson’s amended complaint, McPhee was one of the parties Johnson suspected of collusion.

How can reliance on the declaration of an accused conspirator be established as credible without seeking any documentary evidence to make a determination as to that party’s credibility.

How can summary judgment be justified when the disagreement around the material facts of the case between the plaintiff and defendant presents a gulf as deep and wide as the Grand Canyon?

Also troubling is the fact that Judge Sullivan granted summary judgment without requiring NFLPA to respond to Johnson’s Amended Complaint.

How can injured parties maintain trust and confidence in a judiciary in which the rights of one party are suppressed while the other party is given benefit of the doubt regarding every disagreement or dispute?  Without discovery establishing what’s credible and what isn’t, how could any potential plaintiff view the proceedings in the Southern District of New York as fair and neutral?  How could someone of lesser stature than Lane Johnson, especially someone with less experienced counsel or God forbid, proceeding pro se even hope to be heard?

The Second Circuit needs to firmly correct this mistake if, by extension, their appellate court is to be regarded as a place of law and justice rather than a court of expediency that merely gives lip service to those principles.

Permanent link to this article: https://advocacyforfairnessinsports.org/archive/past-nfl-cases/lane-johnson-v-nflpa-nfl/lane-johnsons-appeal-brief-casts-shadows-on-nflpa-and-district-court/