Will Lane Johnson Finally Be Able to Expose the NFLPA’s Spin? 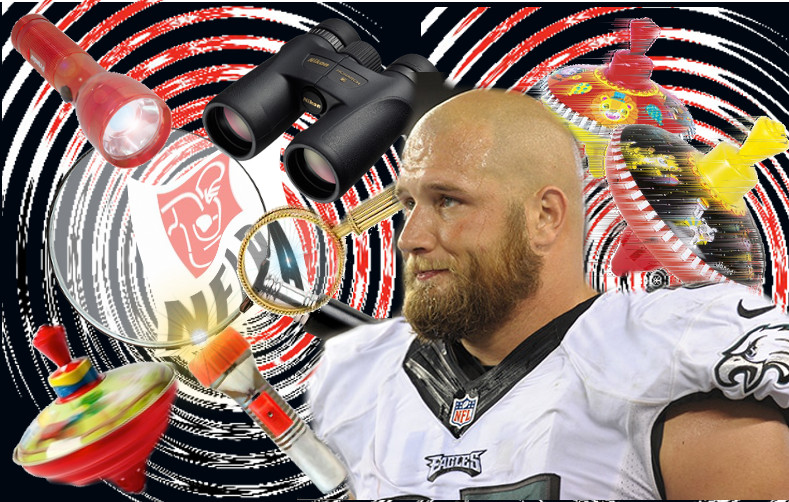 For nearly two years, Lane Johnson has been asking questions and is now waiting to see if the court will, at long last, grant his request for discovery.

In the letter, Zashin stated that the LMRDA requires unions, including the NFLPA to provide their members with all written and oral modifications to their CBA and extending policies.  The NFLPA claims to have complied, yet questions remain, and documentation is still incomplete.

While the NFLPA submitted declarations from attorneys Heather McPhee and Stephen Saxon, he emphasizes, “neither declaration states the production to Johnson is complete.  Rather, both state that they only ‘believe’ that the NFLPA provided a complete copy of the Policy or that there are no oral agreements.” (emphasis in the original text)

Zashin reminds the court that the credibility of McPhee and Saxon is “squarely at issue,” since Johnson ascertains that those very people are among those he believes conspired against him with the NFL.  Zashin cites case law in Colby v. Klune supporting the discovery request, “when the facts of a case turns on credibility, a triable issue of fact exists, and the granting of summary judgment is in error.”

Lane Johnson ingested a substance he says was designated with a green check mark on the Aegis App provided by the union.  A banned substance not listed on the label caused Johnson to fail a urinalysis.  This happens frequently in sports.  Only days ago, 49ersWebZone reported that long snapper Kyle Nelson is facing a suspension for a substance he believed was safe.

“I have been taking the same supplements for my entire time with the 49ers, while undergoing often simultaneous testing by the NFL with no issues,” Nelson said on Tuesday via a statement issued by the team. “I do not deviate from my nutrition routine, and I would never knowingly take a banned substance. I am currently having the supplements tested, and I hope to uncover the cause of the positive test. When the product is identified I fully intend to seek legal action against the manufacturer to protect against this happening to other players in the future.”

The story says that Nelson is scheduled to become a free agent in March and the ten-game suspension will include the first six games of the 2019 season.  This will most likely impact his value at a time when players have the best chance of securing lucrative contracts.

A similar occurrence happened to 49ers practice squad wide receiver Victor Bolden, Jr. earlier in the season, costing him a quarter of his salary for the year.  He filed a lawsuit against the supplement manufacturer.  Why isn’t the union suing manufacturers who fail to list ingredients to the detriment of membership?  Why are players having to go it alone?

Meanwhile, 49ers general manager John Lynch stated, “Hopefully this serves as a reminder to all of our players that they need to take the proper steps to know exactly what they are putting in their bodies.”  In this respect, the NFLPA often sounds like the NFL’s echo chamber.

“What steps can a player take, one might ask.”  The answer is sending a sample of the supplement to a lab for testing.  Since the industry is unregulated, one batch could test clean and another batch could contain a substance that could cost a player 25% or more of his annual salary in a league where players realize NFL stands for “Not for Long.”  It seems absurd that everything a player might ingest be submitted to a laboratory for testing, at risk of substantial loss of income.  I don’t mind stating that I’d go insane if I had to send supplements, and perhaps even medicines to a lab every month, and it’s hard to believe that most players are doing this.  My research indicates that if you pull something off the shelf, it’s “more probable than not, ” it could spell trouble.  I’ve checked some nutritional supplements I’ve tried to see if they are permitted and most of the time the answer is “no.”  I even have two commonly prescribed medications for legitimate medical issues that are on the banned list, and I’d gladly swear in a deposition that in no way have these substances enabled me to take on J.J. Watt, or even the slowest player on a practice squad.  I tend to think the fact that more players aren’t popped for a violation stems as much from luck and timing as diligence.  Anabolic steroids are one thing.  Most of the substances that get guys in trouble are something else entirely.

While the players union should be fighting for men who find themselves in the unfortunate position of accidental ingestion, they  rarely provide credible support to players facing a PED suspension, and because Johnson was critical, fought against him.  AT EVERY TURN, it seems.  For  2 years they refused to provide him with nearly every document he requested.  As he went through the system, protocols in the CBA and Policy for Performing Enhancing Substances that he could pull from the internet differed with almost every procedure he was subjected to beginning with the testing itself.

Dr. John Lombardo the Independent Program Administrator for the Policy directed Johnson to provide a urine sample for reasonable cause testing, after, according to his reading of the Policy, he should have been removed from that pool.  No documentation was provided to Johnson to justify this, however, and during his arbitration the NFLPA stated that “reasonable cause” didn’t begin until he was removed from the “random” list, but no one provided documentation to that affect and even Judge Sullivan noted that the wording “to be sure, is not a model of clear draftsmanship.”  Johnson’s still waiting for the documentation.  During the arbitration Johnson learned that Dr. Lombardo was not actually “independent,” when an attorney-client relationship between Lombardo and the NFL was revealed.  The NFLPA could have pulled the plug at any time, but they did not.

According to Zashin, the following documents still haven’t been produced: 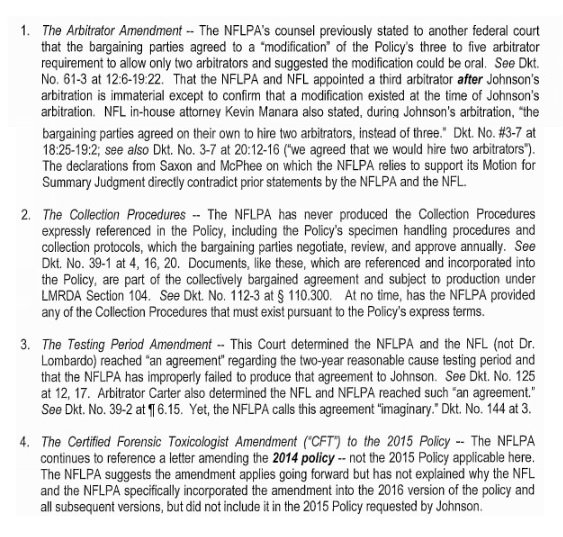 Incomplete documentation and conflicting statements continue to remain in force.  The NFLPA has also failed to acknowledge or address Johnson’s claims of retaliation for his criticism of the union. 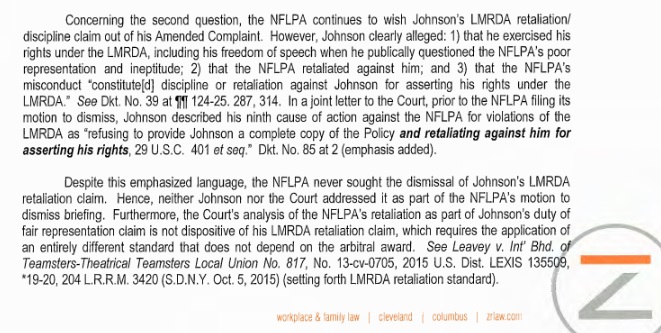 Zashin quickly points out that the NFLPA hasn’t sought dismissal of the retaliation claims related to his LMRDA causes of action; as such, discovery is necessary and the case needs to proceed.  (The NFLPA addressed and denied Johnson’s retaliation and duty of fair representation claims attached to his now dismissed LMRA claim but not the allegations based on LMRDA.)

Furthermore, Zashin states that the NFLPA admits it did not produce what it claims to be a complete Policy to Johnson until October 2018, more than two years after Johnson requested it and after his LMRA claims were dismissed.  The overdue documents certainly didn’t help Johnson understand his rights or defend himself in his arbitration.  “Without discovery, the NFLPA can continue to avoid explaining why it refused to provide the most basic document (Policy) to a member in blatant violation of the LMRDA.”

Johnson also wants to depose Heather McPhee, Stephen Saxon, NFLPA employee Todd Flanagan, NFL employee Kevin Manara, Dr. Lombardo, and other representatives of the NFL and NFLPA.  Zashin points out that it’s improper to grant a summary judgement motion when the party opposing the motion has been denied access to potentially favorable information. How could anyone credibly claim that Johnson has had access to anything that could shed light on his union’s blatant withholding of information and the contemptible manner in which they’ve evaded—or worse, every attempt from Johnson to assert his grievance.

The  NFLPA “does not refute or respond to its prior statements to the Court that it agreed to discovery if any of Johnson’s claims survived its motion to dismiss,” writes Zashin. This has taken place, yet the NFLPA still opposes Johnson’s request and seeks summary judgment.  “The nonmoving party must have had the opportunity to discover information that is essential to his opposition to the motion for summary judgement.”

Even without the benefit of discovery, Johnson’s lawsuit has opened a window and placed a flashlight on dealings it seems the NFLPA would like to keep hidden away.  In reading through the text of the Labor Management Reporting and Disclosure Act, it is clear that Johnson’s requests are firmly due him by law.  It also shows that the NFLPA has taken liberties and shortcuts with other provisions, not the least of which is union elections, which are no longer done by a majority vote of the membership, but rather a select group of player reps who have assumed authority to deny challenges to the incumbent executive director and reinstate him if the members of the inner circle agree.

In August 2017, when Cyrus Mehri announced his plans to challenge DeMaurice Smith in the upcoming union election, Mark Maske of the Washington Post wrote:

“NFL player representatives are scheduled to vote by mid-October on whether to retain DeMaurice Smith as the union’s executive director and bar other candidates from challenging him for the job, under a new set of election procedures not previously disclosed publicly.

The voting rules, outlined in a set of documents obtained by The Washington Post, establish what amounts to a referendum this fall on Smith retaining the job he has held since 2009. The procedures put the decision of whether to sign Smith to a contract extension in the hands of a 14-member selection committee and the board of team-by-team player representatives. If those players opt to keep Smith, the union would not consider other candidates for the executive director job.”

According to Maske, a spokesperson for the NFLPA said “the election procedures were voted on and implemented by the board of player reps,” but declined to further comment.  While it appears no members have challenged the board’s decision, it plainly conflicts with election procedures required by the LMRDA.

I accessed the NFLPA website shortly after Maske’s report to obtain an updated copy of the constitution, only to learn that the 2007 version was still posted online.  It was only after Mr. Mehri obtained a copy and posted it on his website that the NFLPA linked to the current document on their own site, as I wrote in September 2017.

This seems to be another area that NFLPA has undertaken in shrouded secrecy and attempted to shield from both members and the public.  While courts are typically reluctant to grant broad discovery that might extend past the issue at focus in a particular lawsuit, if Johnson obtains only what he’s requesting in regard to his own claims, what he finds promises to shed illumination on at least a few of the secret dealings that occur inside the NFLPA.  Since numerous players are impacted with PED suspensions each year, Johnson’s questions, if answered, would likely be helpful to others who find themselves in a situation of accidental PED ingestion.  With a bit of luck, perhaps it will be the catalyst for some sorely needed reforms.

Permanent link to this article: https://advocacyforfairnessinsports.org/archive/past-nfl-cases/lane-johnson-v-nflpa-nfl/nflpa-spin/