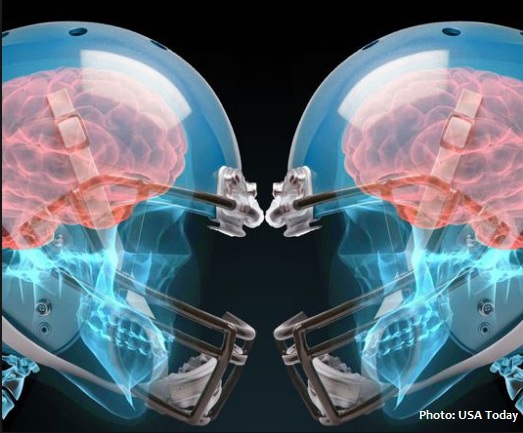 In a lawsuit filed against the NFL and its 32 member teams, Monday in Florida District Court, thirty-eight retired NFL players seek recognition of “living CTE.” CTE, or chronic traumatic encephalopathy is a progressive degenerative condition of the brain caused by repeated blows to the head. The Plaintiffs state, “The crux of our argument centers around the fact that, within the past two years at minimum, the medical diagnosis of CTE in living players has now become viable. Yet, Defendants relentlessly continue deny this science.” Sports law attorney Dan Werly broke the news of this fifty-four-page complaint  which details several new studies and advances in research including a “simple but innovative” new blood test that detects high levels of tau proteins. Previous CTE diagnoses have been through autopsy after a player’s death, denoting the presence high levels of tau proteins in the brain causing this neuro-cognitive disability.

The lawsuit seeks an injunction requiring the NFL to amend its collective bargaining agreement to provide worker’s compensation benefits to living players based on CTE as “a distinct and compensable occupational disease,” and to include CTE compensation in the Neuro-Cognitive Disability Benefit. In their petition to the Court, the plaintiffs state that preemptive declarative relief is warranted to help avert prolonged litigation and endless future court battles in this regard.

The Plaintiffs allege: “Not only have Defendants been negligent in failing to adequately care for Plaintiffs’ traumatic head injuries during and after their careers, they have habitually failed to sufficiently forewarn players of the excessive occupational risks involved in sustaining repeated concussions and head trauma – in violation of OSHA. They have also been notoriously reckless in engendering a mode of game-play where ‘head banging’ and ‘using the helmet as weapon’ is not only facilitated but is encouraged for the purpose of adding visual interest to the game. But most discouraging, Defendants have also been spinning and publishing a web of distorted science for decades that, in effect, trivializes and even denies the causal link between repeated in-play head trauma and the probable development of CTE. Defendants have embraced this ‘junk science’ when, in fact, it has been otherwise proven that CTE is an irreversible, progressive, and fatal degenerative disease of brain tissue that is directly linked to repeated severe head trauma, similar to that which Defendants promote. This overwhelming evidence has been readily available to Defendants for many, many years. Yet, they have been excruciatingly reluctant to subscribe to the majority of these scientific findings, and they continue to promote their biased version of the evidence.”

The complaint reiterates this claim in stating, “Defendants have a long history of conjuring and promulgating maligned scientific studies and medical research, which have been observably devised to complement their financial state of well-being. Strikingly, NFL-Defendants have been handling this health crisis similar to that of the tobacco industry, which is known for using questionable science to minimize the dangers of cigarettes. Defendants have gone so far as to hire many of the same lobbyists, lawyers and consultants that have become infamous for representing the big tobacco companies in the same manipulative manner.”

According to sports law attorney Daniel Wallach, who is not a party to this case, this new suit may be transferred to the Eastern District of Pennsylvania, and possibly consolidated with a similar suit in that jurisdiction in which Plaintiff Tracy Scoggins is also a party. Timothy Howard of Howard and Associates, PA of Tallahassee, Florida is the lead attorney in both of these cases.

This is the latest lawsuit in a string of cases against the NFL, in regard to head injuries. In a volatile case pending in the New York Supreme Court, the NFL’s insurers have demanded discovery in regard to what the league knew about concussions and brain injury prior to a class action settlement in which the insurers stand to pay out about a billion dollars in claims. Expedited discovery has been ordered by the Court with a January 6, 2017 deadline for amended or new pleadings.

UPDATE: Plaintiffs in this case moved for voluntary dismissal of the case without predjudice which was granted by the presiding judge.  When I requested comment from Plaintiffs’ attorney Timothy Howard, regarding this move, he declined comment except for stating that plaintiffs will now proceed in separate, individual cases.

Permanent link to this article: https://advocacyforfairnessinsports.org/archive/past-nfl-cases/living-cte-lawsuit/former-nfl-players-seek-recognition-of-living-cte/