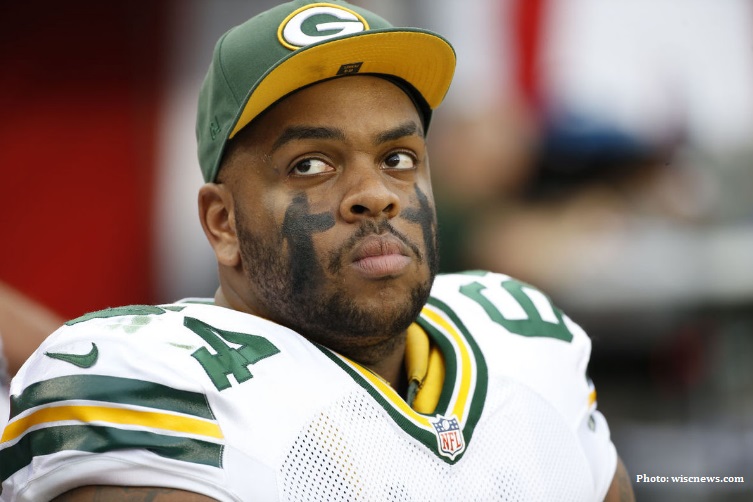 UPDATED: Happily, I missed on this one.  Mike Pennel did indeed reach a settlement with the defendants forcing appointment of the correct number of arbitrators.  Read on for the background and why this case was such a longshot that eventually prevailed.

On Tuesday Michael Pennel, defensive tackle for the Green Bay Packers filed a complaint in the Northern District of Ohio against both the NFL and NFLPA alleging improprieties in his upcoming appeal arbitration with the league.

Pennel, who received notice of discipline for violation of the league’s substance abuse policy on November 8, appealed the decision three days later, pursuant to the appeal process outlined in the league’s substance abuse policy.  Unlike Personal Conduct Policy appeals which go to the commissioner, these are handled through an impartial Notice Arbitrator.  The appeal has been scheduled for December 6.

Pennel is seeking a TRO, injunction and has requested that the court appoint an arbitrator for his hearing.  He claims, since only two arbitrators are available, that both the league and players association are in violation of their collectively bargained agreement.

In his petition to the court, Pennel has claimed that he will suffer irreparable harm should they fail to grant his request.

Both the NFL and NFLPA have responded with statements of position, and upon reading their briefs, it appears they’ve issued a compelling rebuttal.  My initial reaction was that Pennel’s argument probably won’t hold up, but I wanted to get a second opinion on this, so I called upon noted arbitrator David Evans for his insights.

“It’s questionable whether there is federal jurisdiction in Ohio,” Evans said. Pennel is a resident of Wisconsin and plays for a team located in Wisconsin, therefore the validity of jurisdiction seems a stretch for many reasons.  In support of the lack of jurisdiction argument, Evans said, “This would be the path of least resistance, the easiest way for the court to boot the case.”  He further explained, “The Federal Arbitration Act (FAA) does not confer jurisdiction (there must be diversity of citizenship) and parties are required to exhaust grievances at the arbitration level under the Labor Management Relations Act (LMRA) before heading to court.”

Probably the most fatal flaw in Pennel’s case, however, is that he did not wait for the NFL’s arbitration process to play out.

The above statement from the NFL is correct.  Evans elaborates on this, “The general rule is that complaints about the appointment of an arbitrator (or Panel) can only be made in the context of a motion to vacate the award. In other words, a party has to await the outcome of the arbitration before seeking review of a procedural issue such as arbitrator appointment.”

In Pennel’s case, the arbitration isn’t scheduled to take place until next Tuesday, therefore, there is no award to vacate; instead, he is trying to bypass the scheduled arbitration through court intervention.  “The theory is that the complaint may disappear depending on the outcome of the arbitration,” Evans explains, but he adds, “Courts are loathe to interfere with a pending proceeding.”  He compares it with a trial process in which parties are unhappy with the court’s actions but must await the outcome of the trial before appealing.

The NFL states that Pennel and his counsel have been actively participating in the appeal process and that discipline is automatically stayed until the arbitrator issues a ruling.  According to the NFL, this should be expected no later than December 13.

Pennel’s primary argument is based on the collectively bargained provision for a pool of neutral arbitrators, citing that only two, instead of three arbitrators are available.  The NFLPA explains the reason for having only two arbitrators and assures that this deviation from the CBA is of mutual consent with the league. 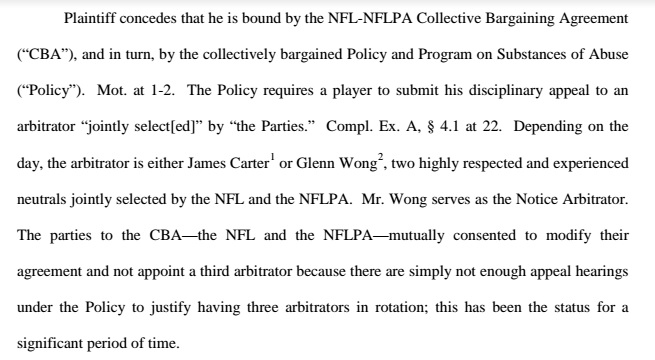 “The underlying contention is that the arbitrator was drawn from a pool of two candidates and not three,” Evans said. “This seems immaterial if the parties can still draw a qualified neutral to hear the appeal.”

The NFLPA further explained that the objective in having the pool of arbitrators was to ensure availability of an arbitrator each week.  Mr. Carter and Mr. Wong’s alternate week availability has satisfied this requirement.

Regarding the issue of irreparable harm, the NFL’s position regarding the suspension as the basis or harm rather than the arbitration, seems valid. 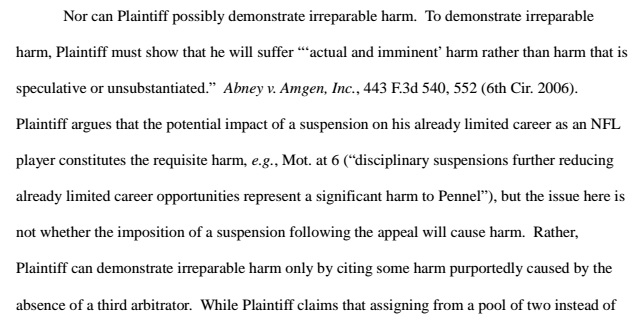 While I hate to find myself in agreement with the NFL, in much of anything (and have a feeling the NFLPA probably feels the same way), it seems both the league and the union are correct in stating that Pennel has failed to show how presenting his case to an arbitrator assigned from a choice of two as opposed to three arbitrators would harm him in any way.

David Evans projected that, “Pennel will be required to proceed with the arbitration,” even suggesting that the court might deny the injunction before I could go to press.  With that in mind, it appears I’ve made my “deadline,” as the court agreed late this afternoon to schedule an evidentiary hearing for next Monday.  It seems Pennel may have managed to bypass his initial arbitration date, however, it’s doubtful he will be able to bypass the arbitration indefinitely.  Tick Tock.

Permanent link to this article: https://advocacyforfairnessinsports.org/archive/past-nfl-cases/mike-pennel-v-nflpa-nfl/why-packers-mike-pennels-suit-against-the-nfl-nflpa-isnt-likely-to-go-far/