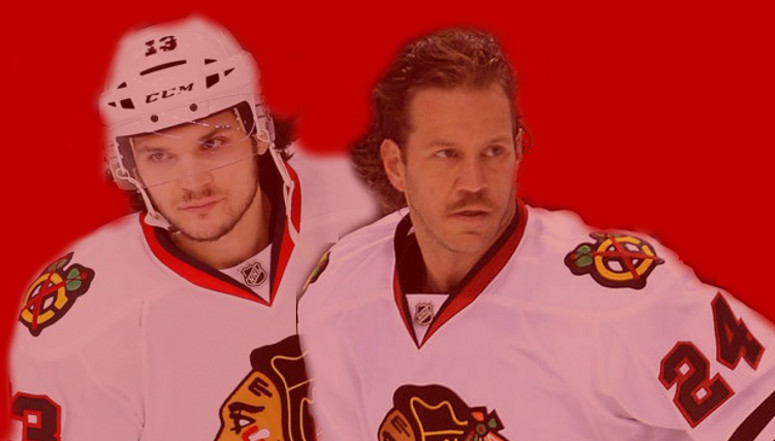 “Stop telling people the world is flat and just do the right thing. Instead of ignoring the damage that occurs to the brain when you get your bell rung out on the ice, let’s own up to it and get guys the help they need. Not just after they retire, but while they’re playing the game…Enough is fucking enough already.” – Nick Boynton

On Thursday, two former NHL players, Daniel Carcillo and Nick Boynton, who have been increasingly critical of the league’s handling of fighting and denial of the risk of brain injury filed a lawsuit against the NFL in U.S. District Court for the District of Minnesota.

The players assert that the NHL, outside of any collective bargaining agreement has a duty to keep its players safe.

The brief focuses heavily on the NHL’s reluctance to eliminate fighting and the damage and devastation this has imposed on the plaintiffs as well as countless other professional hockey players.

The tragedies are indeed too numerous to recap, however, the high profile deaths of Derek Boogaard and Steve Montador come quickly to mind, the latter of whom, Carcillo calls “his best friend in hockey,” and Nick Boynton remembers in the following tweet:

They played the same game I did, and when it was all said and done they were really just suffering. They struggled with depression and anxiety and substance abuse, pain. And now I talk about them in the past tense. How they were my friends, how they used to be my brothers. pic.twitter.com/dMlux6tWnh

Young men shouldn’t be dying because their sport used them, deceived them, and then spit them out – all in the name of entertainment and profit.

The lawsuit draws from discovery produced in a consolidated multi-district litigation against the NHL, in which the league staunchly refuses to acknowledge a link between fighting, concussions, brain injury, and the terrible consequences to players.

The lawsuit points out that while the NHL has taken steps to increase player safety in certain areas, it has been hypocritically negligent in others.  “By permitting and promoting fighting, the NHL allowed young players to grow up through the ranks of hockey, learning not how to score goals or kill penalties, but how to fight,” Carcillo and Boynton assert.

Case in point, a statement from a deposed NHL executive:

Presumably because of a fear of diminished revenue, the NHL has for decades refused to eliminate fighting from the game, however, the lawsuit stresses, “Fighting causes a very dangerous combination of physical and emotional turmoil for NHL Enforcers/Fighters.”

“The NHL further knew, or should have known, that brain traumas sustained in fights can lead to permanent brain injury, including but not limited to, memory loss, dementia, depression, CTE, and related symptoms, including addiction.”

“Yet, while personal tragedies endured by professional hockey players continues to mount, the NHL still permits and promotes fighting.”

“Instead, for nearly a century, the NHL has developed and promoted a culture of gratuitous violence within NHL hockey.”

The brief goes on to point out that awareness of the dangers of fighting is not a new phenomenon for the league nor necessarily a new concern for players.  A report commissioned in 1974 by the Canadian Cabinet to study violence in hockey stated:

Despite the report and urging of the players to curb fighting by imposing a one-game suspension plus the remainder of the game in which the fight occurred for players involved in the fight, the NHL rejected the proposition with one team president stating, “We believe in fighting. It’s an exciting part of the sport.”

One player, Bobby Hull, staged a one-game strike in protest of the league’s position.

But the NHL paid no attention, in fact, the 1980s were so ensconced in fighting that they have been called by the NHL, “The Golden Era of Fighting.”  In 1986 Sports Illustrated published an article decrying the violence.

Fighting’s prevalence continued through the 1990s and 2000s harkening “the golden age of the enforcer” in which staged fights became the nightly norm.  In 2014, John Branch wrote in his story for the New York Times, “Blood on Ice: The Life and Death of Derek Boogaard”: 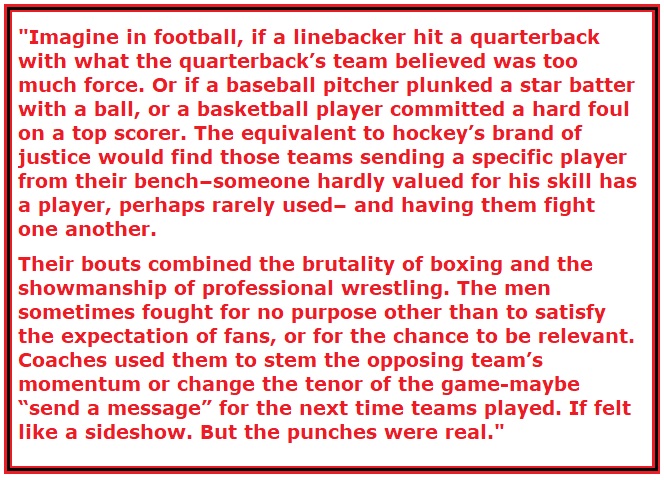 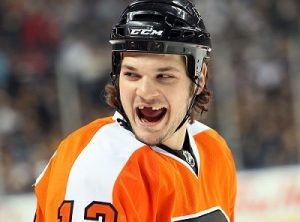 By this time, fighting restrictions had been imposed on skill players with fights among enforcers cheered and commented as if they were boxing matches.  The fights generally didn’t end until a player was down, blood was drawn and often teeth were missing. 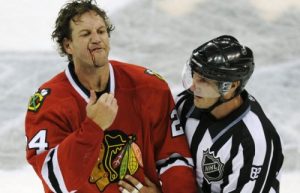 The NHL’s persistence with the fights such as Carcillo and Boynton were involved in demonstrated a severe disregard for the safety and welfare of players.

The lawsuit states that unnecessary violence has led to “long-term brain injury, including but not limited to memory loss, dementia, depression, addiction, and CTE and its related symptoms. Yet, the NHL said nothing to its players about any of it.” 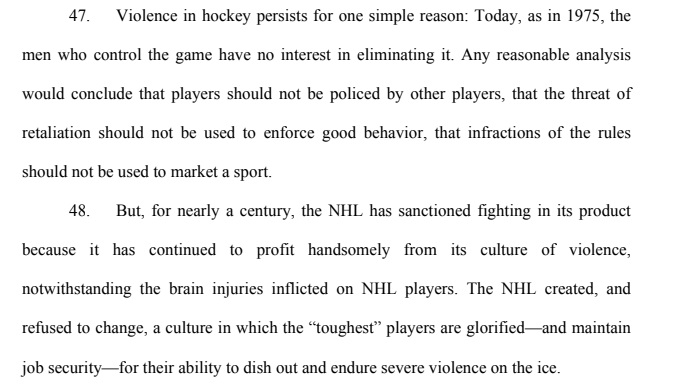 While the NFL took a similar path for years, in the face of massive litigation, they agreed to an uncapped settlement with retired players of an estimated value between $1 billion and $1.5 billion in order to avoid damaging discovery and move forward, at least in some respects – their reluctance at actually paying the claims they agreed to is disheartening – but the fact that claims are slowly but surely making their way through the system represents at least some progress.

The NHL, on the other hand has implemented certain policies, including concussion spotters, which would tend to indicate that the league recognizes that concussions are not a good thing, but on the other hand, they continue to make nonsensical arguments about CTE risks and fighting. 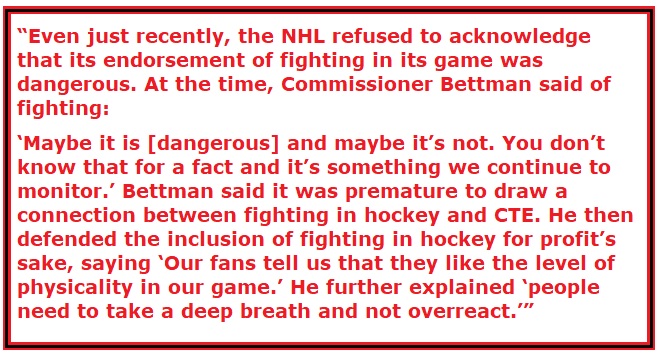 In a riveting five-part series, Under Oath, TSN’s Rick Westhead incorporated video depositions of Bettman, numerous owners, trainers, and others in the NHL hierarchy that paint a damning picture of the league’s response to brain injury.  One example is the testimony of Boston Bruins’ owner Jeremy Jacobs. 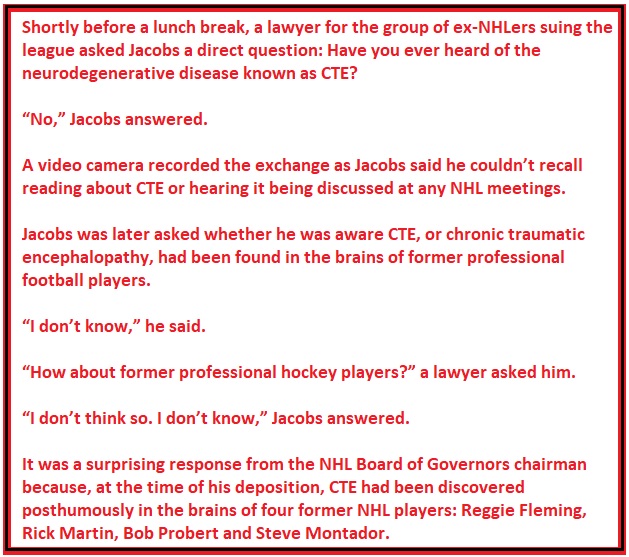 In the TSN article, commentary from Jody Balsam, a former lawyer for the NFL and current professor of law at Brooklyn Law School said, “If we take these owners at their word, and they really don’t know what CTE is, it just makes the owners look like dilettantes.”

Not only does this type of testimony make the NHL executives look like fools (Who could possibly be involved with sports over the past decade without at least hearing a casual mention of CTE?), but the observer might also find the testimony indicative of unmitigated greed and lack of conscience. 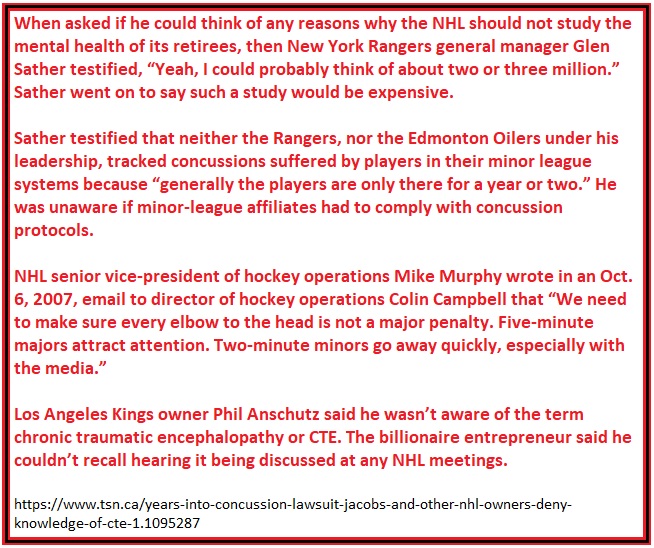 The NHL’s scorched earth litigation strategy has gone so far as to even attempt to overwhelm and effectively shut down Boston University’s CTE research, but thankfully the tactic was recognized by the Court and the discovery demands that sought to bully the researchers were scaled down appropriately.

Another tactic in recent use by the NFL in both disability and concussion suit claims is to discount and discredit neurological impairment under the guise of mental illness, with the players union complicit in the apparent sleight of hand.  I expect the NHL to make full use of this methodology as well. as the league attacks the claims of Carcillo and Boynton, in addition to those in the MDL.

Instead of trying to employ the “which came first – the chicken or the egg?” argument, both leagues need to recognize that the question is irrelevant, at least regarding how the problem should be addressed.

As Boynton pointed out in his powerful Players Tribune article, “It’s tough to think about sometimes, to be honest, because I love the game of hockey. Literally, all I wanted to do in life — from the time I was super little and just trying to keep my balance out on the frozen pond in the backyard — was play in the NHL.”  It’s a terrible irony that in realizing a dream, many players are forced to confront a unique nightmare.  In the article, Boynton relates how he was given painkillers and sleeping pills to keep him in the game, and how he kept quiet and tried to keep going because of the prevalent culture in hockey.  When he finally reached a point of desperation and asked for help for the first time, he was traded, causing him to withdraw and internalize his struggles even more.  Later, when he did receive some help, it was directed toward substance abuse and didn’t address the underlying problems.

High-level athletes face a set of circumstances that need to be dealt with in an honest manner.  The levels of pain medications that leagues and even many players might argue as necessary, set the player up for a greatly increased risk of addition.  Add in neurological damage – especially damage to the frontal lobe which diminishes self-control and you have a recipe for disaster.  Factor in the mental stress of having to perform consistently and often under duress and knowing that guys are lined up for your job should you falter, and add having a self-identity, completely intertwined with your role as a professional athlete, unlike most other professions, and it’s easy to see why the cards are stacked against the players.

While addiction and mental illness are widespread societal problems experienced throughout the general population, the impact of brain injury with athletes in contact sports needs to be acknowledged rather than whitewashed and swept away with generalizations.  Typically, prior to their sports careers, most athletes did not show indications of mental illness and did not abuse drugs.  Early CTE symptoms tend to mimic or perhaps entwine with symptoms of mental illness, and later lead to dementia and other areas of impairment.  Both members of the public – fans, and sports leagues – need to acknowledge this and come clean.  Entertainment and profit should not trump humanity.

Sports leagues, like the NHL, need to back off their legal defense of denial and meet the challenges head-on and two-fold.  Every possible precaution needs to be taken to minimize future risks of brain injury, and alternative methods of pain management need to be fully explored as to lessen the risk of addiction.  The culture needs to change.  Secondly, players past and present deserve optimum care, and when they become incapacitated, compensation for their sacrifices to the game.

“I don’t want somebody else to be in this position, you know?

You have a lot more years to live after professional sports.”

Thank you to the @PlayersTribune for capturing my story & to @NICKBOYNTON24 for such an honest piece of writing. Love you bro! pic.twitter.com/c9YElBYMEh

I applaud players like Carcillo and Boynton for coming forward with their difficult and personal stories.  I hope that their courage will be rewarded with more and more players joining them.  “I truly believe it’s going to need to be the superstars of the game driving things. As much as I’d like to believe I have the power to change the world, the reality is that no one in power cares about my complaints. No one’s gonna change league policy because me and Carcillo are pissed,” says Boynton.

He’s right, of course.  That’s why we all need to do what we can to support these men, and pressure the leagues to accountability.  Fans have a role to play as well.  If we use our social media presence to let the leagues know that we’ve seen enough, and we’re appalled at the way brain injury is addressed and the manner in which impaired players are treated, the money brokers will be forced to listen.

All quotations not otherwise attributed are from the lawsuit filed by Corboy and Demetrio on behalf of Daniel Carcillo and Nick Boynton.

Permanent link to this article: https://advocacyforfairnessinsports.org/archive/past-nhl-cases/carcillo-v-nhl/former-nhlers-nick-boynton-and-daniel-carcillo-call-for-accountability-in-a-new-lawsuit-and-appeals-through-players-tribune/