Mike Peluso insists it’s time for the Devils to pay 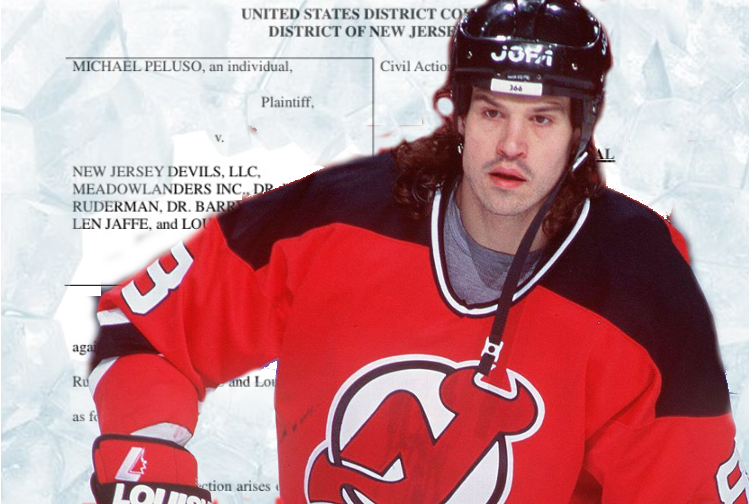 Update: 5/20/2019: Peluso’s case was dismissed without prejudice for failure to serve Defendants.

On Jan. 3 Peluso filed a lawsuit in a New Jersey federal court against one of the teams he played for during his nine seasons, the New Jersey Devils. Peluso also listed physicians that treated him during his time with the franchise as defendants, along with another company owned by the Devils and Lou Lamoriello, the general manager of the Devils at the time.

Peluso alleges that the defendants conspired to conceal information from him about his neurological health after he received a concussion which required hospitalization while playing for the Devils in 1993. Peluso further states that he was deceived by the team medical staff, resulting in his continued play despite the fact that he was at risk of significant neurological damage upon further head trauma injuries. Because of this, Peluso argues, the parties are responsible for his current physical health maladies which include early-onset dementia, grand mal seizures, depression and other symptoms which have been identified with chronic traumatic encephalopathy (CTE).

In part, this filing was prompted by Peluso’s failed earlier attempt to bring this action in his home state of Minnesota. Nearly two years ago a similar filing on Peluso’s behalf was dismissed because of the defendants’ lack of a connection to the venue. This new complaint by Peluso should not be confused with Peluso’s participation in the lawsuit in a federal district court in his home state, despite its similarities. That complaint was brought against the NHL, not an individual franchise, and settlement was reached in that suit last year. Peluso declined to opt into the MDL settlement, as Peluso having done so would preclude him from filing this new suit.

The relatively meager financial award offered by the NHL’s settlement offer in light of the tremendous cost of Peluso’s medical bills may have played a part in what triggered Peluso to file this complaint, however. Peluso states that he expects his medical costs to figure in the millions of dollars over his lifetime and the payout for most of those who accept the NHL’s settlement offer will be $22,000.

If the case does go to trial, Peluso’s argument heavily depends on substantiating that the Devils not only ignored a warning about Peluso’s neurological status from Dr. Marvin Ruderman in 1994, but that they intentionally withheld that information from Peluso. Peluso maintains that had he been aware of the gravity of the risk that continued play brought, he would have ended his NHL career at that time.

If counsel for Peluso can convince the court of those allegations, the rest of the story will easily fall in line from there. Because Peluso’s medical records are discoverable documents and his medical history since the time his symptoms began is documented, the Devils might follow the NHL’s example and offer Peluso a settlement before trial. Whether that settlement offer will be accepted is likely to depend on the size of the offer and the confidence of Peluso’s counsel in whether or not a larger award could be won in trial.

Another possibility to consider is that the case could be transferred to the MDL in Minnesota with other concussion cases that are part of the MDL.  This is already happening with cases filed after settlement approval against the NFL.  If several cases are found to share at least one common factual question and the panel determines that consolidated proceedings will be relatively convenient for the parties and save judicial resources, the panel may transfer those cases to a specified federal district judge, who will preside over coordinated pretrial matters in one consolidated action; at least, in theory, that’s how it’s supposed to work.  If this occurs, Peluso may have another long wait ahead of him.  Realistically, once a case enters MDL, it’s often challenging to get remand back to the originating court in order get the case to trial.

Substantial discovery has already taken place in the Minnesota MDL, therefore the purpose of transfer, at least from a plaintiff’s standpoint has been, for all practical purposes fulfilled.  According to a Boston University Law Review article, One Size Doesn’t Fit All: Multidistrict Litigation, Due Process, and the Dangers of Procedural Collectivism by Martin H. Redish and Julie M. Karaba, “That [MDL] court then has complete jurisdiction over all pretrial matters, including discovery, motions for class certification, Daubert motions, dispositive motions such as summary judgment, and pretrial settlement,” even though outside the MDL that court would not have jurisdiction over the case and even within the MDL cannot bring it to trial without a Lexecon waiver in which the parties agree to have the case tried in the MDL Court.  Prior to the tentative settlement, the NHL said that it would not consider Lexecon waivers for bellwether trials.

Further complicating Peluso’s lawsuit is that the settlement hasn’t yet been finalized.  If what the NHL considers a sufficient number of plaintiffs don’t opt in, it may exercise its blow option, at which point the settlement would disintegrate.  Presumably bellwether trials would proceed as part of the MDL process, and since the Minnesota court would not have trial jurisdiction over Peluso’s lawsuit against the Devils, it could be placed on hold indefinitely.

If the NHL does move forward with the settlement, then it may not object to cases being remanded considering this statement to the Court prior to the announcement of the proposed settlement:

“Now that the Court has determined that plaintiffs’ claims are not amenable to class treatment and with common discovery from the NHL complete (or virtually so), the only authorized step left for this Court as an MDL tribunal charged solely with conducting “coordinated . . . pretrial proceedings,” 28 U.S.C. § 1407(a) (emphasis added), is to oversee discovery and pretrial motion practice (including jurisdictional and summary judgment motions) regarding the individual claims.”

“Alternatively, if the Court remains firm in its position that it will not allow discovery [of plaintiffs’ individual cases] to proceed in the remainder of the MDL cases, then the time has come to bring this MDL proceeding to a close. After all, absent the continuation of “coordinated or consolidated pretrial proceedings,” there is no purpose left for this MDL proceeding. 28 U.S.C. § 1407(a) (emphasis added); see also In re NHL Players’ Concussion Injury Litig., 49 F. Supp. 3d 1350, 1351 (J.P.M.L. 2014) (transferring cases to District of Minnesota “for coordinated or consolidated pretrial proceedings”) (emphasis added). Accordingly, unless the Court authorizes broad discovery and other pretrial activities that would advance the transferred cases toward ultimate trial in their transferor jurisdictions or jurisdictions of proper venue, it is effectively conceding that the pretrial proceedings the Court intends to conduct as to the non-local cases is complete – and there is no justification for continuing to hold those cases in the MDL proceeding with no activity.”

Likely the NHL realized that it has greater resources to take on the individual cases than the plaintiffs do outside class action status; therefore, it’s possible Peluso’s case won’t be consolidated, or if it is, will be remanded if the settlement proceeds which would be a very good thing for Peluso.

If Peluso is able to secure a larger settlement than other former NHL players are weighing accepting from the NHL or wins a significant award in trial, he may perhaps unintentionally set off a chain reaction. Other former NHL players who were litigants in the NHL case might try to replicate that success and levy suits against their former clubs and the medical professionals who treated them during their playing careers. Such individuals should note that accepting the NHL’s terms would bar them from filing their own suits similar to that which Peluso has brought against the Devils.

Buford’s use of his cavalry division to block the Confederate advance to the heights outlying Gettysburg not only allowed the federal troops to occupy those same heights, but undoubtedly was a crucial strategic component of the Union victory in that battle. In 1863, Buford made what he saw as the devil pay. In 2019, if Peluso is successful in securing a large award, more NHL franchises than just the Devils may end up paying.

Permanent link to this article: https://advocacyforfairnessinsports.org/archive/past-nhl-cases/mike-peluso-v-nj-devils/mike-peluso-insists-its-time-for-the-devils-to-pay/