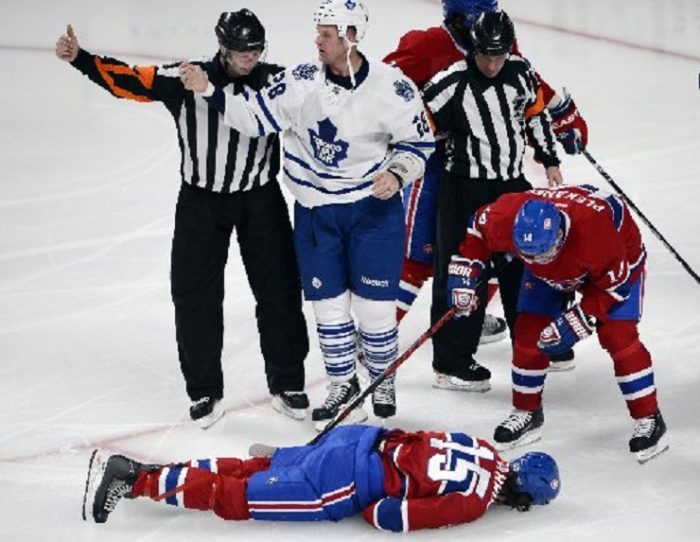 Last Friday, Judge Susan Richard Nelson issued a decision denying class certification in the NHL Concussion Litigation, consolidated in Minnesota District Court in August 2014.  The case revolves around claims that the National Hockey League concealed the risks and dangers of brain damage inherent to the sport of professional hockey for decades, as well as rendering improper diagnoses and treatment, prioritizing profit at the expense of the health and safety of those playing the game.  Part I of this series analyses Judge Nelson’s ruling and how the case arrived at this point, and Part II will examine the impact of the ruling and what the players must prove in order to prevail.

To arrive here, the litigation hurdled a number of significant obstacles, the first of which was surviving a motion to dismiss in March 2015, in which Judge Nelson acknowledged the players’ claims of latent injury not apparent or knowable at the time of documented injuries, thus evading the NHL’s statute of limitations arguments based on a clock that starts ticking at the time physical injuries were incurred during their careers.  Her ruling also provided a generally favorable opinion on the sufficiency of pleading of the players claims of concealment and misrepresentation.

On May 16, 2016, the players overcame another major roadblock when Judge Nelson denied the NHL’s motion to dismiss on preemption grounds.  In her well-reasoned ruling she inferred that it was premature to decide if the case was bound to interpretation of any collective bargaining agreements, and that the case would have to proceed in order to make a final determination on the NHL’s claims.  And proceed, it did, with vigorous and hotly contested discovery, which at one point was so aggressive on the part of NHL that the scope threatened to shut down research at Boston University’s CTE center, had the judge not scaled their demands for every shred of CTE research conducted there, to what was directly applicable to the case.

Unlike the NFL, which agreed to settle the concussion injury lawsuit filed by its players prior to any potentially damaging discovery taking place, the NHL, seemed undeterred as documents, emails, and deposition testimony which showed a callous disregard for players’ well being and the rapidly developing science on the link between contact sports and brain injury continued to surface.  Throughout the litigation which was largely ignored by many media outlets,  TSN’s Rick Westhead provided stellar coverage of many of the documents that surfaced in among other articles, his five-part “Under Oath” series, an excerpt of which is highlighted below: 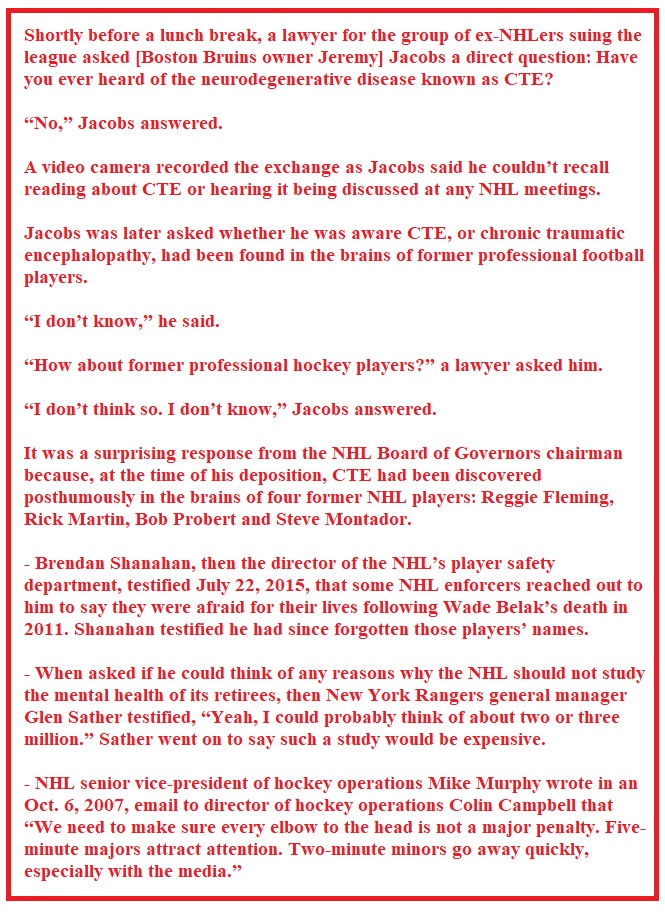 In addition to the statements above, NHL Commissioner Gary Bettman has consistently and with little if any indication of compassion for the players, denied both to the media and in discovery admissions that he rejects a link between hockey and CTE and has defended fighting as integral to the sport.  Apparently perceiving their fan base as less sensitive to the brain damage exacted upon hockey players than their NFL counterparts, and the potential PR repercussions, the NHL’s refusal to settle and its scorched earth approach to the litigation eventually paid off, at least in the short term.

Obtaining class certification without a settlement is a situation akin to trying to put a puck in the back of a net minded by both Dominik Hasek and Jacques Plante, or in other words, quite rare.

According to a 2014 study, which appears to be the most recent available, less than 25 percent of petitions for interlocutory review have been granted, in regard to class certification rulings among all judicial circuits nationwide.   The Eighth Circuit, which governs Minnesota District Court granted only 14.6 percent, making it the third least friendly circuit in reconsidering class status.

The study also indicated that it was much more likely for a defendant appealing an approved class certification to have the district court’s decision reversed than it was for plaintiffs whose bid for class certification had been denied to be granted class status on appeal.  Further complicating matters is the fact that Judge Nelson referenced two decisions by the Eighth Circuit which create binding precedent, casting the potential benefit of such a move as murky at best.

In comments to Sports Illustrated, Charles Zimmerman, a lead attorney representing the players indicated that it was “too soon to know if there would be an appeal.”  FRCP Rule 23(f) which governs appeals of proposed class actions dictates that any appeal must be filed within 14 days of the district court ruling; therefore if there is no appeal by July 27, the district court’s decision will become binding.

In her ruling, Judge Nelson in large part based her decision on the wide variance of state laws governing eligibility of participation in the type of medical monitoring sought by the players, and though the plaintiffs had asked the Court to apply Minnesota law to the monitoring provisions, Judge Nelson did not agree this was appropriate based on her evaluation of substantive, procedural and remedial applications of law.

As a result of this interpretation, Judge Nelson deemed that a player’s claim would be governed in accordance with state law that applies to the location where he spent the bulk of his career, or in the case of a journeyman player, his current place of residence.

She noted that on the broad end of the spectrum some states permit medical monitoring awards requiring only that a participant demonstrate exposure to risk as opposed to a diagnosed injury.  On the other end of the scale, some states will approve monitoring only for those who have demonstrated injury, with numerous variations and stipulations from state to state such as those noted below. 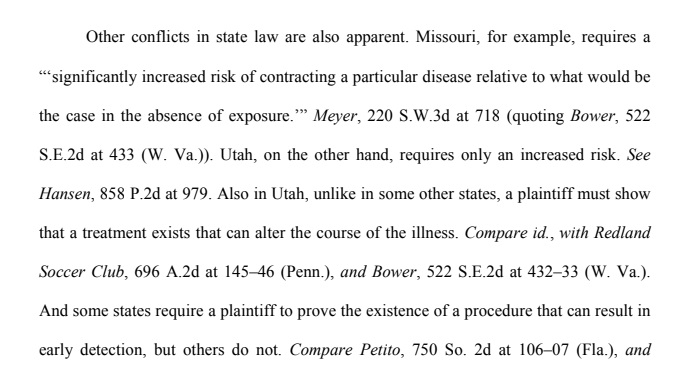 She found the fact that some states do not have established case law on medical monitoring as a further complication.  Of the estimated 5,000 players who would have been eligible class members, one third live in Canada and five of the six named class representatives played for a Canadian team at some point in their career, two of whom are Canadian residents.

“No Canadian court has recognized the validity of medical monitoring claims, and a number of those courts have expressed skepticism of such claims due to Canada’s publicly-funded healthcare system,” she added in a footnote in the opinion.  In contrast, the medical monitoring provision in the NFL settlement was made possible because the parties settled and created the terms for the BAP program, which though it has been plagued with obstacles, would in all likelihood not exist at all, outside of the private agreement which does not require interpretation or regulation by state or Canadian law.

Based on the myriad governing factors, in citing Harding v. Tambrands Inc., Judge Nelson wrote, “instructing the jury in a manner that is both legally sound and understandable to a jury of laypersons would be a herculean task” and “the verdict form necessary to submit the case to the jury would read more like a bar exam,” leading to her conclusion: 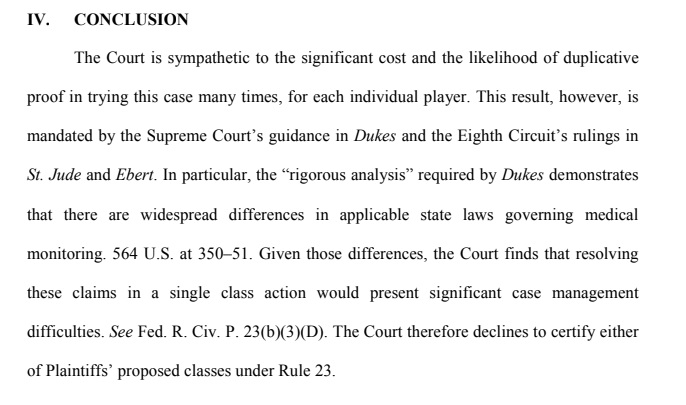 Though medical monitoring concerns consumed the bulk of her opinion, precedent from the United States Supreme Court in Walmart Stores, Inc. v. Duke and two rulings of the US 8th Circuit Court of Appeals, Ebert v. General Mills, Inc. and Grovatt et al v. St. Jude Medical, Inc. led her to conclude that resolving the claims of all the players who would have been involved in the class would have proven too difficult given the rigors of analysis of each player’s circumstances essential to determining liability on the part of the NHL and extent of harm done to the player.  Judge Nelson also cited variance from state to state in laws which dictate how employers must conduct themselves in regard to their injured or potentially-injured employees and the potential relief employees can receive as secondary concerns.

Understandably, this is a devastating blow to members of the proposed class, who hoped to find relief in a judgment against the NHL or a settlement similar to the NFL Concussion Settlement in order to have security regarding their medical needs.

As alluded to in her ruling, and confirmed in statements from plaintiffs’ attorney Charles Zimmerman, these cases will now proceed individually.

The second segment of this series will delve into the legal challenges NHL players are now expected to face one-by-one, and potential strategies they may employ in their quest for justice.  Click here to read Part 2.

Permanent link to this article: https://advocacyforfairnessinsports.org/archive/past-nhl-cases/nhl-concussion-injury-litigation/class-certification-denied-in-nhl-concussion-litigation-an-analysis-of-the-decision-and-future-implications/