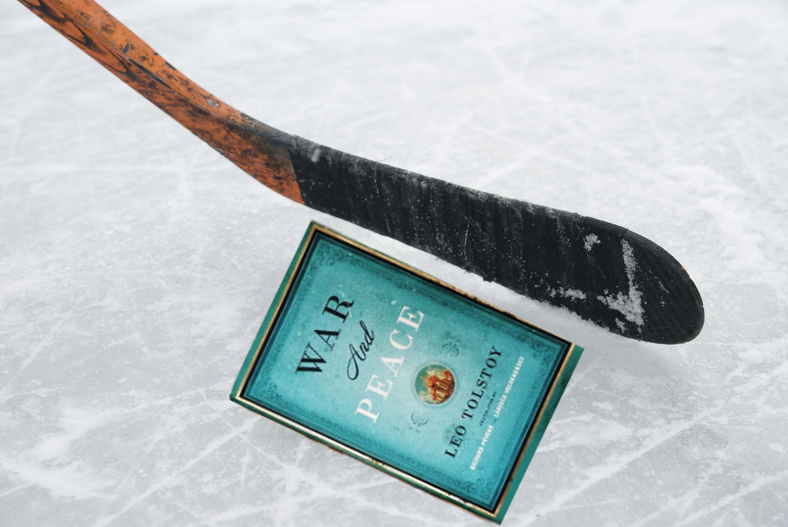 Vegas would probably set the odds in favor of war. 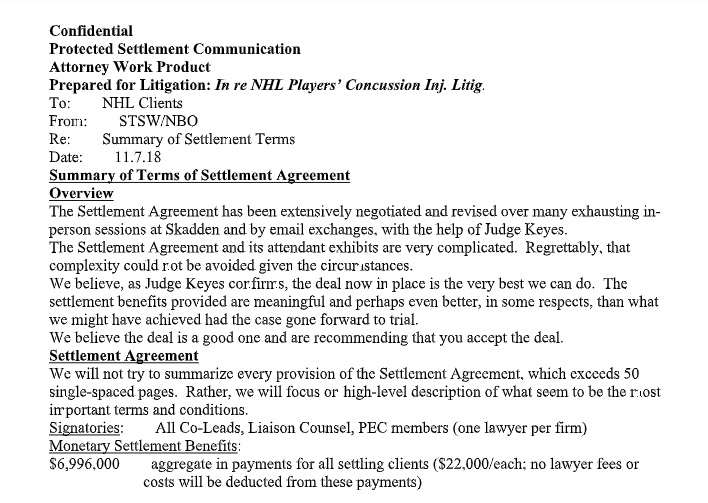 On the surface $22,000 seems like a slap in the face to former NHL players who are concerned about or are suffering brain damage from their days on the ice; this seems especially true for families who’ve lost their loved ones to CTE, and other brain injury or mental health issues related to his hockey career.

It was probably difficult for plaintiffs’ attorney Stephen Grygiel to write, “We believe, as Judge Keyes confirms, the deal now in place is the very best we can do.  The settlement benefits provided are meaningful and perhaps even better, in some respects, than what we might have achieved had the case gone forward to trial.  We believe the deal is a good one and are recommending that you accept the deal.”  Especially that last sentence.  I can’t imagine going back to a client and saying, “The judge agreed, $22,000 is the most we could get for your brain.” Unlike the widely publicized NFL settlement, the lawyers representing the hockey players put up a heck of a fight and produced some very damning discovery, but unfortunately the class failed to certify and initially it appeared the consolidated lawsuits would proceed slowly one-by-one.

I spoke with plaintiffs’ attorney Charles Zimmerman the morning of November 12, and he indicated that the settlement was indeed an unlikely accomplishment as the NHL went scorched earth for four years.  “And we think that under the circumstances this is a very appropriate settlement that was very hard fought over many, many months as mediated settlement negotiation.”

After surviving the appeals process the uncapped NFL settlement began its implementation phase about two years ago.  Some players or their families—notably those suffering from the devastation of ALS, or a confirmed CTE diagnosis at autopsy have received some high dollar awards.  Others whose loved ones died at the “wrong time” were left completely out in the cold.  Despite, as of November 5, approval of 675 monetary awards in the amount of $577,007,956, only 498 of these claims, totaling $348,854,531 have actually been paid.  519 claims have been denied and hundreds more have been audited as the NFL seeks to pay only the sickest of the sick.

There are many similarities with the NFL case but also many differences.  Prior to settlement approval for the retired football players, around 5,000 retirees had filed lawsuits and/or retained counsel, contrasted with only about 300 retired NHLers.  The weight of the numbers gave the NFLers substantial negotiating leverage over their NHL counterparts.

THE SETTLEMENT – WHAT WE KNOW

A confidential letter dated November 7, was released to the public through a Forbes article, revealing the first details of the proposed settlement.  The article included a PDF of the release agreement that players must sign to opt into the settlement.

The first figure, $6,996,000 denotes a no-strings attached lump-sum payment to settling plaintiffs based on 318 plaintiffs, which is the sum of players who’ve filed lawsuits (138) plus others who’ve retained counsel for the settlement.  The second figure, $552,000 indicates players who have filed lawsuits or claimant specific responses, which brings their compensation to $28,000—still not a lot of money for a human brain.

While both the summary and release form indicate that attorneys will be waiving their contingency fees in lieu of negotiated attorney compensation to be paid by the NHL as a part of the settlement, other liens could further reduce or eliminate payment to many players.

The following items are subject to liens as dictated by federal law.

Typically named plaintiffs are awarded bonus compensation in settled lawsuits. Presumably an extra $10,000 will be awarded to lead plaintiffs who choose to accept the settlement.

The above represents a description of the medical benefits.  The first sum seems designated for medical exams, which the November 12 press release identifies as neurocognitive examinations.  Travel expense for players who must travel over 100 miles is also included.  The release also indicates that players who show impairment in two or more domains will qualify for the medical benefit, but the testing parties, methods, and treatment providers have not been identified.

This is an extremely important accomplishment by the plaintiff attorneys.  In many MDLs unused funds revert to a defendant, causing problems similar to those NFL players face because the less the defendant is forced to compensate, the harder they will fight the claims.  Here, there is no incentive for the NHL to do this.  Once they make a deposit, it’s very unlikely they’ll care how it’s spent, meaning that players should not face steep barriers in qualifying for benefits as long as the fund holds out.  The first players to file claims are likely to receive the greatest benefit, since funds are not sufficient to cover a maximum benefit for all plaintiffs.

The $750,000 figure represents administrative costs and the explanations are self-explanatory.

$6,950,000 is an extremely modest figure for attorney fees, especially since individual client retainer/contingency fees are waived, and the amount includes fees and expenses.  Considerable discovery has taken place in this litigation including numerous depositions and consultations with experts who typically bill at between $1,000 and $2,000 per hour.  Attorneys are likely doing little better than breaking even, so it’s not just players who are coming up short on compensation.

When settlement is reached in almost any class action or MDL settlement a “blow provision” is included which enables the defendant to walk away if enough plaintiffs refuse to participate.  Presumably the Execution Date is concurrent with the date the notification was issued to players on November 7, 2018.  This would make for an Effective date of on or around March 7.   If the NHL is not satisfied with the participation rate, they could “blow” the agreement at this time.  It should also be noted that if a player signs a release it is irrevocable unless the NHL walks away.  In that instance it is voided “now as then” as if it hadn’t existed.

Mr. Zimmerman indicated that whether or not to accept the settlement is a personal decision between players and their attorneys but says that he feels it would be in the best interest of most players to accept the deal.

The NHL has represented that it will walk away without 100% participation.  I asked Zimmerman if he felt they would.  “I don’t think they will, but it’s not my call. My guess is that if a sufficient number participate, they’ll proceed,” he said.  In most MDLs if the participation rate is high that’s normally how things go.  The NHL has been a particularly abrasive and bullying defendant, however, making it difficult to predict.

Opting Out or In

The biggest differentiator in class action and non certified MDL settlements is the opt-in/opt-out requirements.

I want my day in court. I won’t be accepting a settlement.

According to TSN’s Rick Westhead, Mike Peluso also says that he will not be accepting the settlement.  It’s hard to believe the survivors of Steve Montador would agree to such a trifling amount either.

In contrast, since the NHL settlement “class” is at the present time uncertified and not really a class in the typical sense, it will only include those who affirmatively choose to participate by way of signing the release form.  Since there is no class, no absent or potential class members will be bound—only the players who affirmatively accept the settlement.

Players who are engaged in litigation or represented by an attorney will be able to proceed with their own lawsuits if they decline to opt into the proposed settlement. 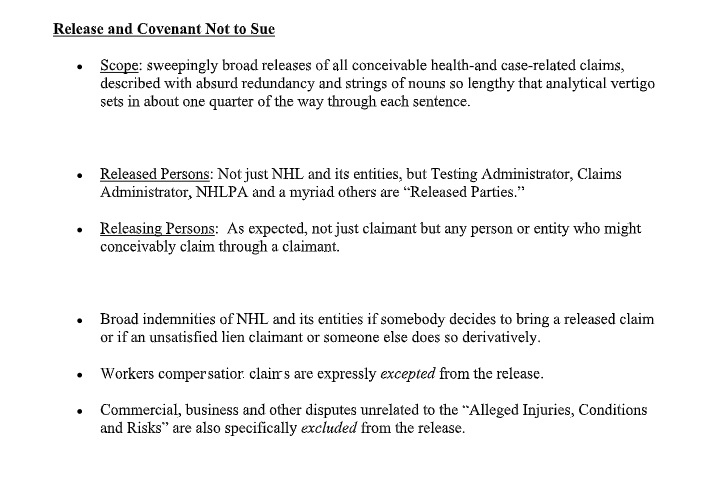 Plaintiffs’ attorney Stephen Grygiel’s description of the release is terse and highly descriptive: “sweepingly broad releases of all conceivable health-and case-related claims, described with absurd redundancy and strings of nouns so lengthy that analytical vertigo sets in about one quarter of the way through each sentence.”  In our conversation, Mr. Zimmerman referred to the NHL’s attorneys as “wordsmiths.”

“They fought absolutely everything,” Zimmerman said, “There wasn’t any issue in the case they didn’t fight—there wasn’t a one… And you know, this is not my first rodeo. I was involved in major cases for 30 years; cases all over the country and never have I seen the defendant fight over every issue the way the NHL did, but it’s consistent. with their history. As you know, Gary Bettman has always been a fierce, fierce litigator.”

The following is an example of the “wordsmiths” at work.  It appears the league, in an abundance of words, covered every possible instance, scenario, and person to mitigate against future lawsuits through the release and indemnification language. 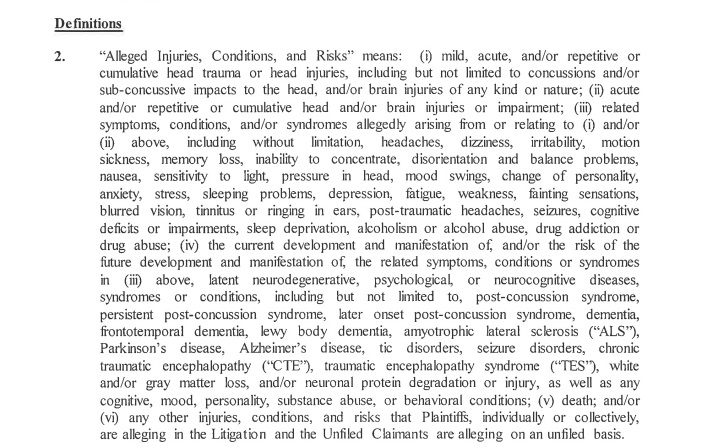 The massive definitions as shown in the release document are indeed comprehensive and continuously repeated and re-emphasized throughout the contract.

The indemnification of parties released is quite extensive: 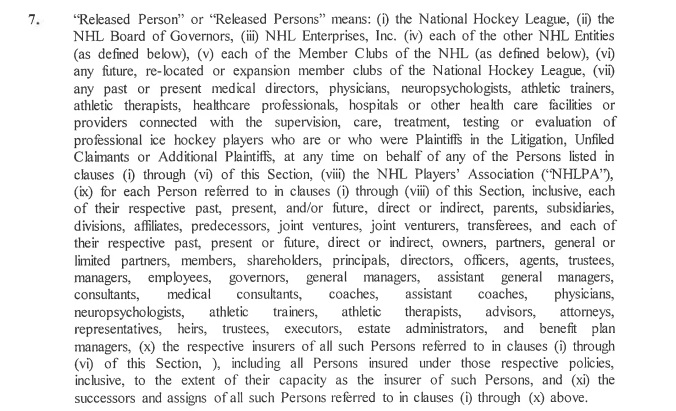 Likewise, the NHL didn’t provide any leeway for lawsuits from others who may be connected to affected players.  Players will not only waive their own rights but those of their families or others who may have a legal association, both during the player’s lifetime and after his death.

On the other hand, workers’ compensation claims and most business claims are not released, nor does this agreement impact any CBA negotiated benefits. 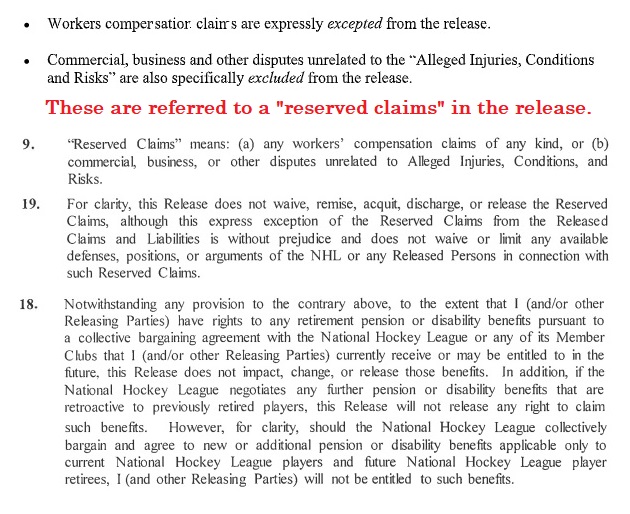 At first glance, I was appalled at the low dollar figures presented in this settlement but after evaluating the available information it appears it could be a decent compromise for men who aren’t severely impaired and primarily want medical monitoring.  For others, who have already incurred immense medical expense, are pursuing litigation in order to force the NHL to admit accountability (the settlement doesn’t do that), or for those who are suing on behalf of a lost loved one, it seems less appropriate.  Determining the quality of diagnostics and medical care provided will be of utmost importance to the players when making their decisions.

“The @NHL does not acknowledge any liability for any Plaintiff’s claims in these cases.”

To all former players, do not accept this settlement for the concussion lawsuit. You will be forced to be seen by the same #NHL & @NHLPA doctors to determine if u r eligible for treatment. pic.twitter.com/MevPj53IDe

Advocacy for Fairness in Sports obtained the full settlement agreement and exhibits defining the medical only minutes before going to press; it will take some time to parse the documents to see how much influence the NHL plans to exert.  Financially there is no incentive to deny claims but speculatively they may want to keep a tight rein on the data.

Instead of bringing a global peace that most settlements are designed to produce, this one seems to indicate an escalation of conflict as players must make a crucial decision in a short period of time.

The coming weeks will be critical as to if the settlement proceeds or implodes, or if Judge Nelson will unexpectedly decide to certify a post-motion class.  While plaintiffs’ attorneys indicated they do not expect this to happen, it would not be without precedent, and if the status of the settlement should change, an entirely different situation would present.  I’ll be covering that in a follow-up that presents some alternate scenarios, commentary from legal experts and a closer look at settlement details.

Permanent link to this article: https://advocacyforfairnessinsports.org/archive/past-nhl-cases/nhl-concussion-injury-litigation/whats-the-price-of-a-brain/