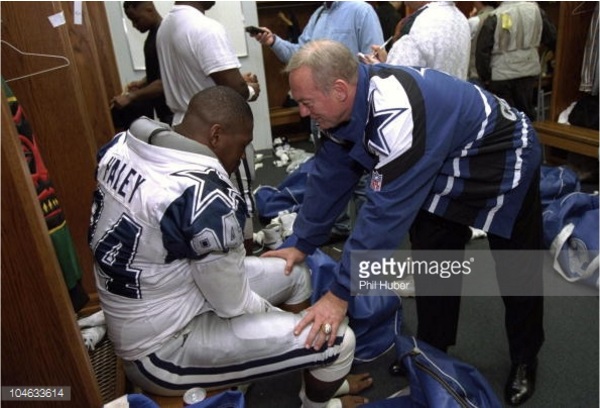 On Monday, a California judge ruled that Dallas Cowboys owner Jerry Jones will be required to give deposition testimony under oath regarding his knowledge of how prescription pain killers are used in keeping injured players on the field.

In May of last year a suit was filed against the thirty-two member Clubs of the NFL by the wife of Charles Evans, a former fullback for the Minnesota Vikings and Baltimore Ravens, who is deceased, and a number of retired NFL players who have collectively played for every franchise in the league.  The Plaintiffs allege that the NFL Clubs conspired to keep players on the field through imprudent and dangerous abuse of prescription painkillers.  The complaint begins as follows:

Beginning in the 1960s, professional football began to rival baseball as the country’s national game. Football is far-better suited for television – a veritable match made in heaven. And once the profits flowed from television, the Clubs began to realize the seemingly limitless revenues they could achieve.

At the same time, the individuals running the Clubs began to realize the necessity of keeping their best players on the field to ensure not only attendance at games but also the best possible TV ratings. That realization resulted in the creation of a return to play culture by the Clubs that prioritized profit over players’ health and safety.

Given the injuries inherent in the game, concern for the players’ health should include giving them adequate rest, having fewer games, and keeping more players on the roster.  But all of that would cut into profit. So the Clubs chose a different method to keep their players on the field.

That method, according to the complaint, turned out to be, in two words, prescription painkillers.

The brief claims that the Clubs’ doctors and trainers illegally dispensed medications to their football patients “in an amount and manner they would never do with their non-football patients.”  All the named plaintiffs in the proposed class action suit claimed similar experiences of being administered drugs, sometimes without knowledge of what they were taking, in order to get them back on the playing field as quickly as possible.  They claim they were never warned of potential adverse consequences of taking these drugs.

“Instead, the Clubs have resolved this inherent conflict in favor of profit over safety with more games, less rest (e.g., Thursday night football), and smaller rosters that save payroll expenses. And they achieve their ends through a business plan in which every Club employee – general managers, coaches, doctors, trainers and players – has a financial interest in returning players to the game as soon as possible. Everyone’s job and salary depend on this simple fact. The return to play culture was based on four cornerstone concepts: profit, media, non-guaranteed contracts, and drugs. As professional football entered the 1960’s, these bedrock concepts of the return to play culture would become the driving force behind every business decision made by the Clubs.”

Plaintiffs argue that all member Clubs are complicit in this regard since collectively they have played for every franchise and have all experienced the same culture.  They believe the job security of the team doctors and trainers rests on keeping the players on the field at whatever cost or consequence.  The brief submitted by the Plaintiffs cites a Washington Post survey of former players in which nine out of ten reported playing while injured.  Fifty-six percent of them said they did this “frequently.”  Sixty-eight percent of the players felt they had no choice in the matter.  Players state they are constantly reminded by coaches to return to play as soon as possible in order to avoid being replaced on the roster.

Troy Sadowskie, a former tight end who played for the Atlanta Falcons, the Kansas City Chiefs, the New York Jets, the Cincinnati Bengals, the Pittsburgh Steelers, and the Jacksonville Jaguars recalls, “In Pittsburgh, syringes full of Toradol were lined up in the locker room labeled with the player’s number.”   Steve Lofton, a cornerback who played for the Arizona Cardinals, New England Patriots, and Carolina Panthers remembers that on flights returning from away games, trainers walked the aisles of the plane, baggies full of pills in hand, “passing them out like M & M’s.”  He referred to the flights as “strangely quiet,” with fifty-three players “numbed to sleep by the power of the drugs.”

Not only are players urged to stay on the playing field as much as possible and given whatever medications they might need to facilitate this, Plaintiffs state, “Doctors and trainers also frequently misrepresent the extent of a player’s injury…Players report that doctors and trainers tend to refer to everything as a ‘sprain’ to convince the player that the injury is not serious and the player can play through it.”  Plaintiffs also allege that in many cases the “sprain” has been a break, and in some cases the player is never informed of this, only finding out through independent physicians after their playing careers have ended.  Players also claim inaccurate and incomplete record keeping.

In a review of the medical records of 745 former players provided by the Clubs for purposes of Workmen’s Compensation claims, 164 (22%) players had no records at all, 196 (26.3%) did not mention any drugs at all, 64 (8.6%) mentioned drugs without dosages, and 321 (43%) mentioned only some dosages. These failures highlight the omissions that occur as doctors and trainers fail to document the Medications they are providing the players.

Many of the medications administered, especially NSAIDS carry warnings of renal damage, gastro-intestinal problems and increased risk of heart failure.  Some of the members of this suit state that they have indeed experienced these ill side-effects.

Etopia Evans, representing her deceased husband, Charles, recalls that he was given what he referred to as “happy shots” on game day and the pain he experienced afterward when the shots wore off.  She states that he never used prescription painkillers prior to his NFL career, but was addicted to them by the time he retired.  Once retired, and no longer having access to the illegal amounts of drugs that were once prescribed for him, she says that he became a person she no longer recognized; a man “constantly in pain and searching for relief.”  Mrs. Evans eventually moved back to her home in Baton Rouge because living with her spouse had become more that she could deal with.  Charles Evans died unexpectedly of heart failure, despite no family history of heart disease.  He died two days after being placed in a jail cell for failure to pay child support, having spent his money on painkillers.

The Plaintiffs have requested extensive discovery, including depositions of two franchise owners, Jim Irsay of the Baltimore Colts, and Jerry Jones of the Dallas Cowboys.

The request for deposition of Irsay, cited painkillers found in his possession after a 2014 DUI arrest, believing these to have been provided by team personnel; the request to depose Jones was based on remarks he made regarding quarterback Tony Romo.

“…in a game against the Washington Redskins on October 27, 2014, Dallas Cowboys’ quarterback Tony Romo experienced a hard tackle that resulted in two vertebrae in his back being chipped and fractured. Romo returned to the game after taking a painkilling injection. He then missed the next week’s game. Such injuries take six to eight weeks to heal. However, less than two weeks after the injury, the Cowboys were playing a game in London, an important showpiece for the Clubs trying to increase football’s international popularity. Cowboys’ owner Jerry Jones stated ‘[Romo’s] going on the trip to London and logic tells you that we wouldn’t have him make that trip to London and back if we didn’t think he was going to play.’ Romo played in the game in London and the rest of the games the Cowboys played that year. On information and belief, Romo would have been unable to play through such acute pain without frequent use of painkilling pills and injections.”

As per standard operating procedure, the NFL attempted to shield these owners from deposition, but on Monday Judge William Alsup issued an order which stated, “the record does not justify deposing Mr. Irsay.” He did, however find Plaintiffs’ request to depose Jones compelling enough to grant seven hours of deposition which will be allowed within two weeks of the close of his team’s season.

All quoted text comes directly from Plaintiffs 85 page complaint brief.  A copy of this brief can be viewed here.

Permanent link to this article: https://advocacyforfairnessinsports.org/current-litigation/active-nfl-cases/nfl-painkiller-lawsuits/jjones-depo/