In granting motion for summary judgment in favor of NFL Clubs San Diego/LA Chargers, Denver Broncos and Green Bay Packers, late Friday July 21, Judge Alsup has declared the only provisions available to players for recourse of injury are workers’ compensation and collective bargaining.

Worker beware! In the final pleading from Alphonso Carreker and Reggie Walker – the two remaining plaintiffs in the severely gutted lawsuit – plaintiffs’ counsel argued that if workers’ compensation exclusivity is interpreted as NFL defendants reckoned, “then, virtually no claim by a worker could ever exist outside the workers’ compensation regime.”

Reggie Walker pled concealment claims for permanent injury to his ankle which could have been prevented had the Chargers’ not kept him on the field with prescription painkillers which numbed the pain as he did further and irreversible injury to himself without realizing that he was doing so.

To this claim Judge Alsup ruled:

Alphonso Carreker required heart surgery because anti-inflammatories prescribed for an infection in his heart, which occurred long after retirement, were ineffective due to the tolerance to anti-inflammatories that he acquired during his time in the NFL.

In regard to Carreker’s claims against the Broncos, Judge Alsup stated: 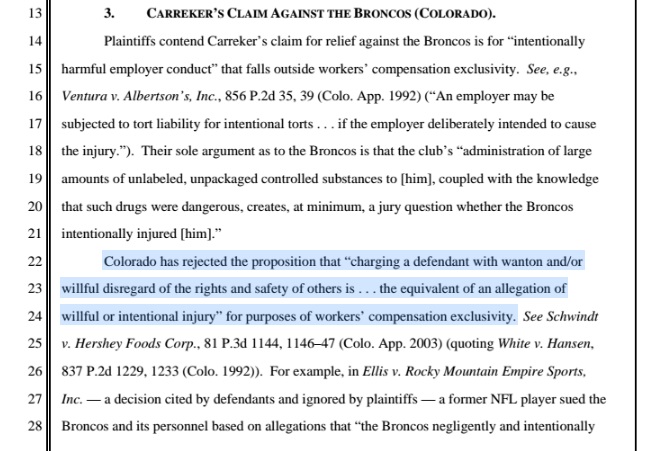 And against the Packers: 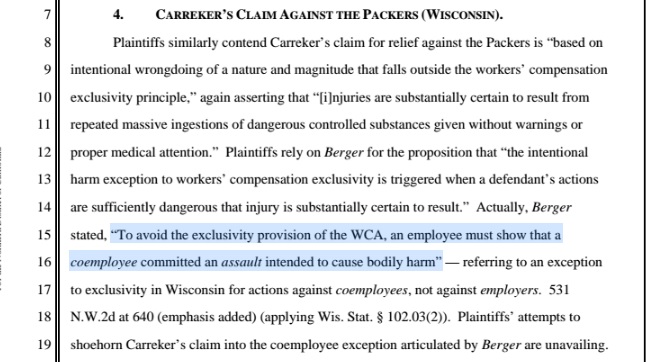 Though Carreker’s counsel asserted that the dangerous and willful over-administration of painkillers “was the equivalent of punching someone in the nose and claiming “I did not intend to do any harm,” Judge Alsup disagreed.  He further stated in his ruling, “First, plaintiffs argue that Berger applies here because, “for all material purposes, Carreker and the Packers’ team doctors and trainers were co-employees.” This argument misses the point. Plaintiffs chose to sue the Packers, not the Packers’ team doctors and trainers.”

As I stated in a previous article detailing the final pleadings of these players in the district court case, Judge Alsup tends to lean heavily toward management over labor in his interpretation of law and consequent rulings.  In this case, his conclusion was as follows: 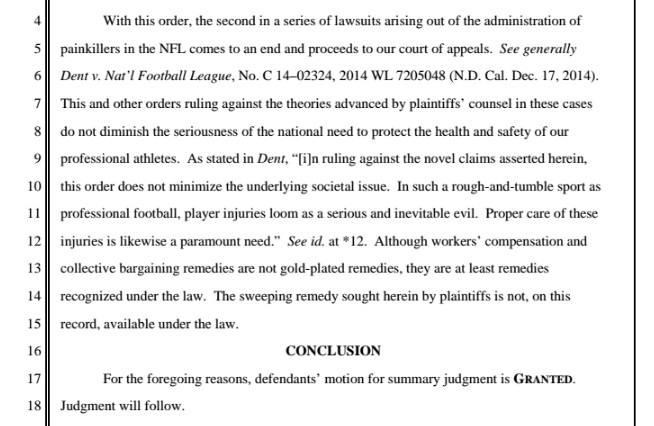 Other plaintiff claims in this lawsuit were gutted because Judge Alsup felt the statute of limitations began with the initial injury and not the latent injury that was realized and attributed to defendants much later.  The Dent lawsuit, over which he also presided, and referenced in his order awaits a decision from the Ninth Circuit Court of Appeals on whether or not collective bargaining prevents the players from suing the NFL (as a business entity as opposed to individual and collective Clubs) in regard to their injuries resulting from concealment and misuse of prescription drugs.  I expect this lawsuit will also be appealed to the Ninth Circuit, where hopefully injured players, who have demonstrated vast illegal conduct supported by documentation and deposition testimony, will find an outlet for relief.