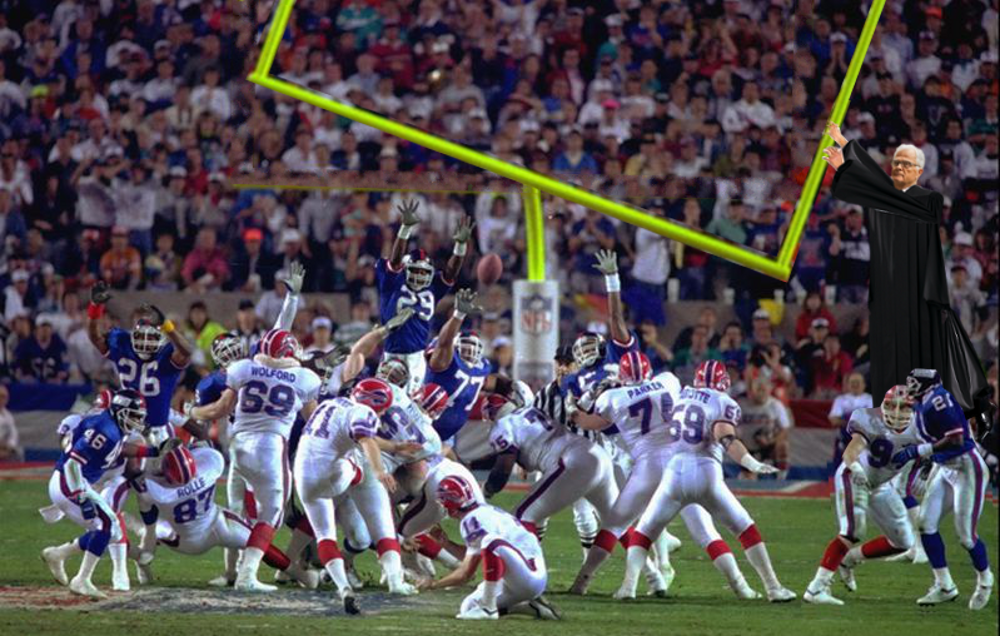 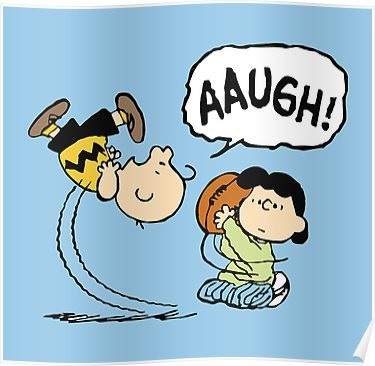 The image of Lucy pulling the football away split seconds prior to Charlie Brown’s lunging at may never be more appropriate than it is as a visual analogy for the ongoing NFL painkiller litigation.

In the appeal of Dent’s Third Amended Complaint (TAC) to the Ninth Circuit Court of Appeals, plaintiffs ask the appellate court to do one thing: require Alsup to abide by the same legal standards he holds so dear.

The plaintiffs contend Alsup made three errors in his order dismissing Dent’s TAC in their petition to the Ninth for remanding and reversal. First, they state that Alsup’s opinion that they failed to support a negligence claim is erroneous because Alsup incorrectly applied California law regarding that standard.  Secondly, they claim Alsup’s finding that the 32 individual NFL franchises, not the NFL itself, were responsible for the alleged negligence is a misunderstanding of their pleading before the appellate court.  Finally, plaintiffs contend Alsup adopted his own view of well-pled allegations and established facts in making his ruling.

The plaintiffs’ holding that Alsup’s standard for a negligence claim is probably the most simple. California law does not require plaintiffs to prove defendants were negligent to their duties to plaintiffs beyond a reasonable doubt, but rather it presumes negligence as an evidentiary matter.

Dent’s first complaint against the NFL was dismissed on CBA preemption because, in Alsup’s opinion, plaintiffs failed to establish the NFL had the duty of care to them outside CBA stipulations. The plaintiffs successfully argued that the NFL controls a pyramid structure of distributing controlled substances intended to manage pain before the Ninth upon appeal, a fact that Alsup acknowledged in his reasoning for dismissing Dent’s TAC.

The appeal of the TAC rightfully asks, if the plaintiffs successfully established that the NFL is in charge of the practice of passing out Toradol like candy at the Ninth, how can Alsup contend the NFL had no duty of care? Such a holding would go against years of precedent in labor law and could be conflated to alleviate liability employers have to provide their employees with safe working conditions in a variety of ways.

Would Alsup also hold that employers who failed to provide material safety data sheets to employees who were harmed by hazardous chemicals in the course of performing their job duties failed to prove negligence per se because they failed to argue that point successfully before him? Such a responsibility is assumed when work regarding those chemicals is undertaken. Alsup went beyond nitpicking to the ridiculous in simply ignoring the fact that the plaintiffs successfully established the very point he was insisting upon at the appellate court and making up his own standard of negligence the plaintiffs had to aspire to.

That leads perfectly into the plaintiffs’ second claim. Alsup’s ever-shifting requirements demanded plaintiffs prove that personnel in the employ of the NFL itself, not those employed by individual teams, illegally administered controlled substances to the plaintiffs and other NFL players. Then Alsup dismissed the complaint, stating the plaintiffs failed to do so.

Here’s an excerpt from the transcript of the hearing that took place just prior to dismissal. 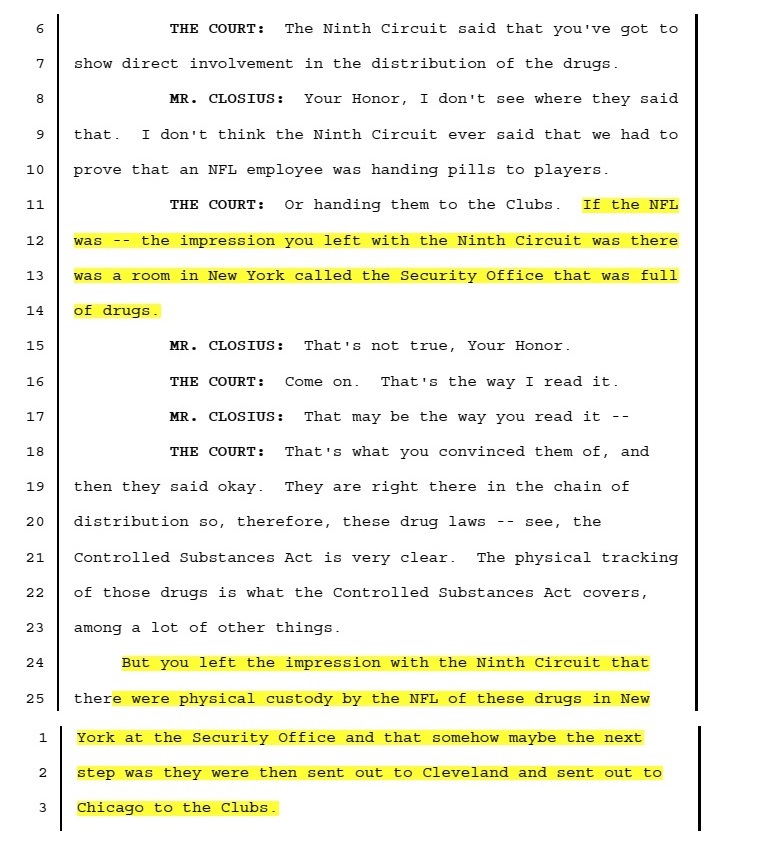 The exchange continued in this manner for some time, and it seemed there was nothing Professor Philip Closius could say that would dissuade Judge Alsup’s insistence on a Park Avenue pusher. 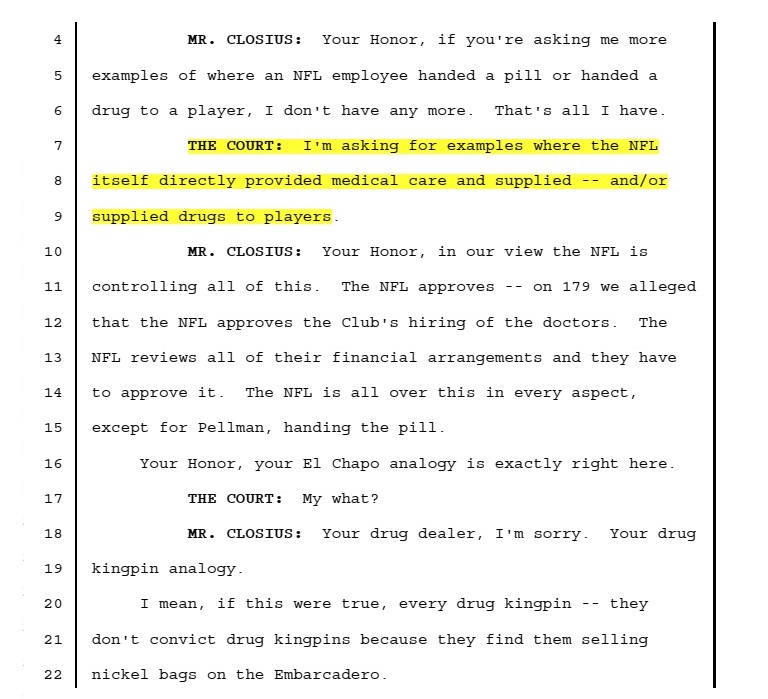 Even if you put Alsup’s faulty application of California law on the standard of negligence aside, plaintiffs have a legitimate beef with Alsup’s dismissal on this count. The participation of one party in illegal activity does not alleviate other parties of their guilt.  Also, the TAC is full of evidence that NFL personnel were involved in the activity.

Given Alsup’s dismissal of the plaintiffs’ successful arguing before the Ninth that the NFL was involved in the distribution of the controlled substances and his holding that the established facts in the TAC did not prove culpability on the part of the NFL itself, it’s fair to ponder whether had the plaintiffs presented hundreds of instances of clear video evidence of dark, snarling figures dressed in polos with the NFL shield upon the chest and badges on lanyards identifying them as NFL employees injecting the controlled substances into the players themselves, if Alsup would have considered even that sufficient evidence to prove the NFL’s involvement. It seems because Alsup felt free to create his own version of negligence, he was also at liberty to ignore all the evidence the plaintiffs presented.

Again, that leads perfectly into the third complaint that the plaintiffs have against Alsup’s ruling. Alsup once again made up his own rules, ignoring legal precedent when it fit his purpose. Cases that are decided on a motion to dismiss, rather than the merits, are to be decided upon one thing: whether or not the plaintiffs are able to substantiate that they are entitled to relief if the allegations are true. If that is the case, then the court should deny the motion to dismiss and proceed to determine whether those allegations are true via discovery and oral arguments.

By simply deciding the allegations had no merit and there was no reason to proceed with a new trial, Alsup exceeded his mandate in ruling on a motion to dismiss. It’s as if he couldn’t be bothered to perform his duty because he preferred to retire to his chambers, whereupon he could don a cap of his favorite NFL team, complete with NFL pennant in one hand and remote in the other navigating a television to the preseason NFL game he would have missed if he was on the bench.

While the logic stated in Dent’s appeal of the TAC to the Ninth is sound, one wonders if any action the Ninth could take would be sufficient to put Alsup’s determination to shield the NFL from any liability in the matter in check. Alsup has proven adept at playing the role of the NFL’s greatest “fanboy” in this matter.

That’s where the hopes for Dent’s case lie currently, however. Hopefully, the Ninth will be able to word its order remanding the case back to Alsup in a way that weighs the goalposts down so heavily, no amount of manipulation Alsup may attempt will be able to move them.

Permanent link to this article: https://advocacyforfairnessinsports.org/current-litigation/active-nfl-cases/nfl-painkiller-lawsuits/richard-dent-returns-to-the-ninth-circuit-again-after-district-judge-moves-the-goalpost/